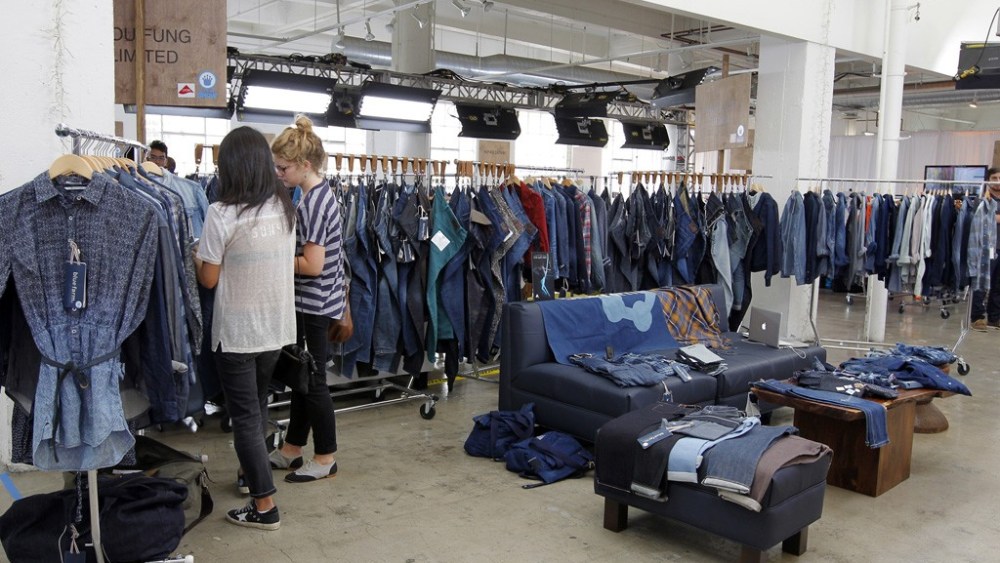 At the semiannual two-day show that ended Wednesday at the Cooper Design Space here, 48 exhibitors representing Brazil, Japan, Turkey, the U.S., Vietnam and other textile-producing countries displayed their offerings for the fall 2014 season. Texture was a top trend, achieved through either coatings on fabric or unusual denim interpretations like dobby weaves and knitlike treatments. While demand for prints waned, interest in photorealism was translated to embroidery, where detailed images were re-created with thread. Blended fabrics also drew attention for technical and financial reasons.

After working with J. Crew, Ralph Lauren, Alexander Wang and Rag & Bone at Kingpins’ New York edition, Japan’s Toyoshima Co. made its premiere at the Los Angeles show with Japanese-made fabrics that integrated cotton selvage with hibiscus, bamboo and linen that cost $15 to $20 a yard.

Sedef Uncu Aki, sales and marketing manager at Turkey’s Bossa Denim & Sportswear, said many U.S. designers have been buying textiles mixed with less than 50 percent cotton, even though the blended fabrics cost 20 to 30 percent more than pure cotton denim. This strategy allows the American companies to avoid paying the 38 percent tariff that went into effect May 1 on women’s cotton jean exports to Europe. Aki also said Bossa can tap into its relationships with Turkish manufacturers to help U.S. brands produce clothes there and skirt the tariff issue. So far, “no one took advantage of it,” she said.

Unlike European designers who prefer crisp denim, the U.S. counterparts searched for the softest hand, vendors said. As such, knitlike denim and velvet were some of the most popular items. Kipas Denim from Turkey did well with its denim that has a knitted look resembling fleece in appearance and feel. Costing $6.50 to $7 a yard, Kipas’ product also capitalized on the trend for color by infusing a blue tint on one side and olive green on the other. Indonesia’s Badjatex offered its version of knitlike denim in a cotton-polyester-spandex blend priced between $3.75 and $4.25 a yard.

Zhonghe from China offered pink stretch cotton velveteen that shimmered with gold glitter. Priced at $5.56 a yard, the velveteen stood out of the range for some U.S. companies that budgeted fabric to cost between $2 and $3 a yard, said Gordon Kwok, Zhonghe’s sales manager. “It’s difficult,” he said. “If they cannot find it in China, they have to find it in Pakistan or India.”

Blue Farm, which designs its fabrics in Italy but produces them in Taiwan and China, highlighted a dobby-woven cotton that replicated tweed as well as a chunky cotton canvas and a cotton cavalry that resembled corduroy; prices run between $5 and $7 a yard. Kurabo’s dobby weave, costing around $8 a yard, received a lot of interest because “it looks like something different,” said Hisaya Shiga, a representative for the Japanese mill. Brazil’s Canatiba Denim Industry tried to break away from the dobby brigade with a $6.06-a-yard style that revealed a geometric print on the underside.

Designers coveted different layers and multiple tones of colors. Bossa varied the thread colors on the warp and weft to yield a more rich and complex shading. For instance, it used gray for the vertical warp yarn and indigo for the weft yarn that ran crosswise in a clean, modern style that resonated with G-Star Raw, the company said.

Italy’s Garmon Chemicals developed a new coating for denim that enhanced both the luster and darkness, a dye that leaves a deeper hue on the seams and another coating that resulted in two different colors on opposite sides of the fabric. It also introduced a more eco-friendly resin that avoids formaldehyde and requires a lower curing temperature.

Concerns for the environment drove other product innovations. Silvadur, a division of Dow Chemical Co., launched a namesake antimicrobial technology that it asserted fights odor and bacteria, hence requiring fewer washes. Usually applied to bedding and socks and lasting 50 washes, the polymer-based silver technology costs 70 cents for each garment.

In a new section dubbed L.A. Workroom, Kingpins featured a quintet of vendors that promote domestic production. One of them was City of Commerce, Calif.-based Linesman Clothing, a full-package manufacturer that made its first appearance at a trade show. With a two-month turnaround and a minimum order of 200 pieces, Linesman charges $48 to produce a pair of raw selvage five-pocket jeans, $87 to $145 for a chambray shirt and more than $120 for a denim jacket. Its clients include Levi’s, Double RL and Seven For All Mankind. “[Our customers are] dealing with premium product,” said Linesman partner Eddie Flores. “They’re not putting out 10,000 pieces of anything. They’re putting out low volume, high quality.”

The premium denim industry’s heightened focus on quality and fashion lured newcomers such as Los Angeles’ TSF Global, which specializes in embellishments, ranging from photorealistic embroidery to rubberlike coatings. Its velvet flocking in tribal designs caught the eye of denim guru Adriano Goldschmied at the fair. TSF started working with the denim companies two years ago when it added woven fabrics to its core knit business. The premium denim brands, in particular, can afford TSF’s prices, which would run 40 percent higher for the photorealistic embroidery than conventional embroidery.