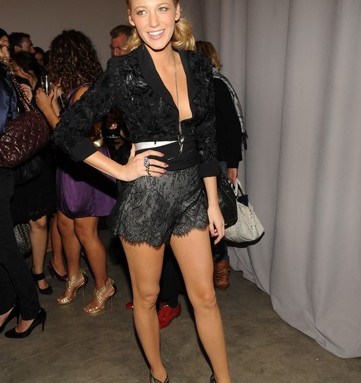 Teens are a fickle, fast-moving bunch — as any parent can attest — and when it comes to fashion trends and the celebrities that influence them, what’s in one day can be quickly “dunzo” the next.

Just a few years ago, it was starlets such as Mischa Barton, Paris Hilton and Lindsay Lohan who were queen bees of the teen set. But today, it’s a whole new crop of starlets and singers that hold the most sway over the middle school-to-college demographic. So move over, Paris and Lindsay — when it comes to youth fashion, right now, it’s all about the stars from “Twilight,” the Disney and Nickelodeon channels, “Glee,” “The Vampire Diaries” and fresh music acts such as Taylor Swift, Lady Gaga and Katy Perry that rule the schools, stylistically speaking. (Not that Hilton, Lohan and company are totally out of the picture — just somewhat eclipsed.)

Swift is the top-scoring celebrity among a number of young stars known for their style submitted to The Q Scores Co. by WWD. Q Scores measure a performer’s overall appeal and likability among those who are familiar with him or her. Also scoring toward the top are Selena Gomez, Lea Michele from “Glee,” Lady Gaga, Rihanna, Miranda Cosgrove of “iCarly,” Carrie Underwood and Kristen Stewart of “Twilight” who all have Q Scores above 30. (The average Q Score for all celebrities polled in this demographic segment, females ages 12 to 24, is 23.)

Scoring toward the bottom were Lohan, Barton, Nicole Richie and reality stars Lauren Conrad and Whitney Port, with Q Scores between 7 and 13.

Among males in this age group, the top-scoring celebrities were Lil Wayne, T.I., snowboarder Shaun White, LeBron James and Jay-Z.

“The teen world moves so fast. The whole nature of being a teenager is knowing what’s fresh and new,” said Ann Shoket, editor in chief of Seventeen magazine. “The newer celebrities are closer to the teen audience’s age and going through the same life stages they are. They know someone like Nina Dobrev from ‘Degrassi: The Next Generation’ and now she’s become a breakout star on ‘The Vampire Diaries.’”

For the age-obsessed world of Hollywood, teens can be a cruel audience, no matter the star wattage involved.

“Kate Hudson, Jennifer Garner, the ‘Sex and the City’ girls: The younger generation really doesn’t care that much about them,” said Kimmy Ratican, fashion and beauty editor at the teen-focused Web site Alloy.com and AlloyTV. “If I use Cameron Diaz or Gwyneth Paltrow in a post, I get no page views. I just did a story on musical muses and nobody commented on Gwen Stefani — although, to me, at age 29, she’s a big style icon. They were much more interested in Katy Perry and Zooey Deschanel — people of their own generation. There’s such a narrow window to appeal to this age group. They are so connected with the Internet and movies and television, and they have a very quick infatuation period.”

One “older” star who’s been able to win over teens and tweens, despite her ripe old age of 29, is Beyoncé, said Ratican. “Beyoncé is still a huge influence on this age group. She’s marketed herself very well and she has a lot of fun with her costumes.”

Appealing to Generations Y and Z is a highly lucrative business for celebrities and the fashion marketers who can leverage their relationships with these tastemakers — although this demographic’s spending has been somewhat tempered by the frail economy. For the 12 months ended in April, teenagers and young adults 13 to 24 years old spent $50.81 billion on apparel, down 6.4 percent from the previous year, according to NPD Group figures. Females accounted for $33.59 billion of that amount, while guys generated $17.21 billion in sales. The same age group spent another $12.3 billion on accessories in the past year, down 11 percent. Females spent $8.28 billion of that figure and guys spent $4.02 billion.

That spending power hasn’t been lost on fashion marketers who have made celebrity fashion labels almost as common as designer labels, quickly signing up the newest batch of teen stars — such as Kmart’s Dream Out Loud line with Gomez and Wal-Mart’s line with Miley Cyrus, co-branded with BCBG’s Max Azria.

“Celebrity influence seems to be increasing because of the sheer exposure and 360-degree access the public has to these personalities and their styles,” said Kit Nordmark, senior research manager at Chicago-based Teenage Research Unlimited. “And today, young shoppers don’t need a stylist and access and endless funds to invest in the latest trends. Fast-fashion stores such as Forever 21 or H&M are able to reproduce the trendiest looks almost overnight, giving shoppers access to affordable look-alikes.”

So what are the ingredients that turn a youthful singer, actress or extroverted reality star into a fashion icon? An innate sense of style is key, as is consistently putting an effort into creating a unique look, say celebrity watchers.

“The most influential celebrities for girls tend to be those known for consistently expressing their own personal style in sophisticated, put-together ways. They’re considered fashion role models simply because they’re frequently out there making fashion statements, getting photographed, and they’re noticed for their cute, unique and often aspirational style,” said Nordmark. “Celebrities like Rachel Bilson, Hayden Panettiere, Lauren Conrad, Whitney Port, Blake Lively, Leighton Meester, Reese Witherspoon, Carrie Underwood and Taylor Swift are particularly visible today. This group is known for wearing the latest looks in a very acceptable and adaptable way.”

Nordmark added that teen girls and guys vary widely in their approaches to style role models.

“Guys rely more often on what stores are carrying and what they’re seeing around or [what] other guys are wearing at school,” she explained. “However, certain guys, such as Ashton Kutcher, Justin Timberlake or David Beckham, are some that receive respect when it comes to style.”

For girls, personality counts, also, added Seventeen’s Shoket, pointing to Conrad, who recently left MTV’s “The Hills,” and Port of “The City.” “They are pretty nice girls, not divas or drama queens, and they’ve got a cool sense of style that’s accessible,” she said.

Olivia Palermo, who plays a self-centered, arrogant character on “The City,” on the other hand, does not resonate with teen girls, said Shoket. “Olivia is not a style icon. She’s not accessible and not likeable. She has a kind of icy polish that does not connect with our readers. Our girls are rooting for the nice girls,” she explained.

Blogs and tabloids have made off-duty dressing as important as, if not more important than, red-carpet events in creating a star’s fashion bona fides. “Being a celebrity is so different today from what it used to be 10 years ago,” said Gloria Baume, fashion director at Teen Vogue. “It used to be you made a movie, did 20 to 30 days of publicity and then things would quiet down. Now, being a celebrity is a 24/7 job and every moment of your life is documented.”

Baume pointed to Stewart as a unique type of fashion icon. “Kristen usually wears jeans and sweatshirts and sneakers, but on the red carpet, she transforms and will wear Balenciaga and Proenza Schouler. I think teenagers are really drawn to that. They are in this awkward, ugly-duckling stage of their lives and they appreciate this ability to transform into something magical,” said Baume. “There’s a dichotomy to her.”

Similarly, Taylor Momsen of “Gossip Girl” has created a distinctive look for herself offscreen with her ripped tights and leather motorcycle jackets, and Cyrus has single-handedly made the motorcycle boot with cut-off jean shorts and slouchy sweater a look du jour. Celebrity stylist Estee Stanley — who works with Michele, Jessica Biel and Ashley and Mary-Kate Olsen — pointed to Katie Holmes as the catalyst for the recent “boyfriend jeans” surge and to Rihanna for bringing sculptured shoulder pads into vogue. Stacey Bendet, chief executive officer and creative director at Alice + Olivia, a favorite brand of young Hollywood, pointed to Lohan’s promotion of leggings, Hilton creating a boom for dresses and Stewart pushing tomboy style.

Apart from a celebrity’s own sense of style, observers say influential stylists such as Stanley, Rachel Zoe and Simone Harouche are central to the fashion personas of young stars.

“As a stylist, I wear many different hats,” said Harouche, who works with Cyrus, Christina Aguilera and Richie. “I have to be a tastemaker, a trendsetter. I have to put myself in my client’s shoes and see what she would want, but also use my own taste to blend the two styles together.”

Fashion is a major component on the two JustJared sites, with many of the postings accompanied by fashion credits, from clothes to accessories to jewelry. The sites also feature an add-on from a company called Pixazza, where each celebrity photo includes a “Get the look” tab, which heightens the fashion-centric experience of the site. Viewers who click on it are directed to third-party e-commerce sites, where they can immediately buy an item similar to what the celebrity is wearing.

Pixazza, which launched last year and is partly financed by Google Ventures, offers up an exact match in some cases, but usually showcases a similar item at a lower price rather than the designer brands celebrities tend to wear.

“We want to offer affordable versions that the average consumer can buy,” noted Jim Everingham, founder and chief technology officer of Pixazza. The company has more than 50 partner brands and e-tailers, such as Nordstrom, Gap, J.C. Penney and Zappos. The Pixazza feature is also incorporated into the Web sites of Us Weekly, OK, “Access Hollywood” and Celebuzz, among others.

“Celebrities help take the risk out of fashion,” said Tim Donza, research director at The Sound Research, a youth market research firm, of their enduring roles in the fashion world. “They show us the trends available to us. One day you can wear shutter shades like Kanye West and the next you can be preppy like the Jonas Brothers. When you grow up, you become more assured and find your own sense of style. But when you’re young, you have a lot more chances to play around.”

Top 10 searches on Seventeen.com, to date in 2010 (female celebrities only).