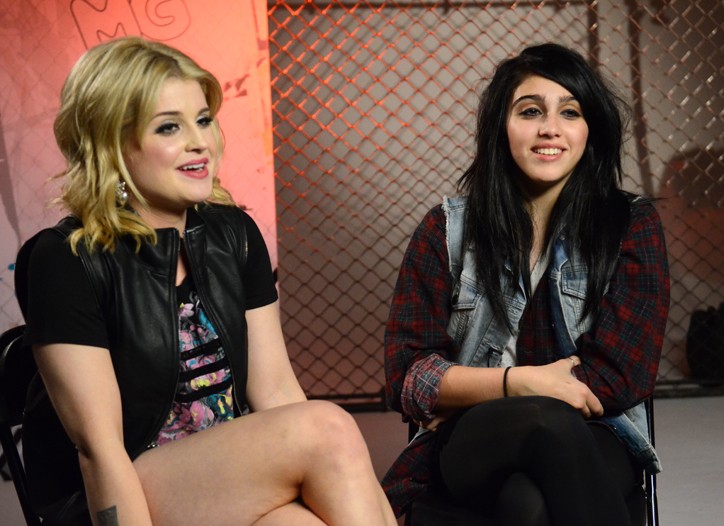 On a crisp, cold school day in New York City in mid-January, Lourdes “Lola” Leon is hanging out with a group of boozy afternoon barflies at a succession of seedy East Village bars.

The 14-year-old is on set at the hipster hangout Lit Lounge and the infamously grungy Mars Bar to shoot the new spring advertising campaign for Material Girl, the juniors line she helps oversee with her mother, Madonna. Featuring in the new campaign is another progeny of music royalty, Kelly Osbourne, daughter of Ozzy and Sharon.

None of this fazes the dedicated imbibers at the local watering holes.

“Yeah, there were people drinking there and it was, like, three in the afternoon. And it’s, like, OK cool,” said Leon, after decamping to a craft services lunch at Bathhouse Studios, also in the East Village, where more studio shots were taken for the campaign. “It was awesome. There were some interesting people there. I think they didn’t even notice that there was, like, a girl in short-shorts being photographed.”

The new ads break this week in celebrity weeklies like Life & Style, Star and OK, with Osbourne succeeding Taylor Momsen as the face of the brand, which is sold exclusively at Macy’s in the U.S. and launches in its first international market this month at 91 doors of The Bay department stores in Canada.

Osbourne, a longtime Madonna fan who once recorded a cover version of “Papa Don’t Preach,” is excited to be a part of the fashion venture. “I’m still waiting for someone to pinch me and wake me up. I can’t believe that I’m actually doing this and working with Madonna and Lola,” said Osbourne. “What I like about it is that it’s a brand for every woman, not just for young girls. They take high fashion and make it affordable and they don’t cut corners. And it’s so my style.”

Osbourne, 26, is significantly older than both Momsen, 17, and the core Material Girl juniors customer. The move from Momsen to Osbourne signals to customers that the line has offerings for the contemporary customer in her 20s as well as for teens.

“There are pieces in the line that I’d be comfortable wearing and other pieces more for my daughter,” pointed out Dari Marder, chief marketing officer at Iconix Brand Group Inc., which owns the Material Girl brand with Madonna and her manager, Guy Oseary, under their joint venture vehicle, MG Icon LLC. “I think Kelly is aspirational for the juniors customer and older women are familiar with her from television. Her work reaches such a broad audience.”

In addition to celebrity weeklies, the media buy for the spring campaign includes monthlies such as Cosmopolitan, Teen Vogue, Seventeen and Nylon. An outdoor campaign will launch in key markets, including the Macy’s Jumbotron and a Times Square billboard that goes up in April. Cinema ads will feature footage of Leon and Osbourne from the campaign shoot, while a robust online campaign, including contests, will launch on the Macy’s and Material Girl Web sites, as well as on dedicated Facebook pages.

“We were trying to be authentic to the roots of Madonna and shoot in the East Village clubs that she could have played when she was just starting,” noted Marder of the campaign, which was lensed by female fashion photographer Brooke Nipar. “There was a lot of girl power on the set.”

Leon and Osbourne first met last July at a Jay-Z concert in London’s Hyde Park. “I remember exactly what she was wearing: a striped maxidress with a jean jacket and pink blazer and I thought she looked so cool,” recalled Leon. “So when [Iconix] came to us with a selection of girls [for the campaign] and she was one of them, I was like, ‘Oh my God, she’s great and she has great style.’ I just think she’s very individual but at the same time she’s very fashionable.”

Osbourne was equally taken with Leon’s fashion sensibilities and personality. “I hate to call her a little girl, but this girl has the best style and she’s so herself,” said Osbourne, who is a commentator on E’s “Fashion Police” and is currently filming the movie “So Undercover” with Miley Cyrus. “And she was the most polite, well-mannered, well-rounded, unaffected normal girl in Hollywood that I met. I couldn’t stop raving about her, so when I got this phone call I just had to do this.”

Osbourne put off her own plans to create a fashion line this year in order to work with Material Girl, according to Marder. In 2004, Osbourne launched a short-lived line of T-shirts called Stiletto Killers that was sold to Hot Topic and other retailers.

Leon is currently a freshman studying drama at the LaGuardia High School of Music & Art and Performing Arts, a public school that was the inspiration for the 1980 movie “Fame,” but manages to carve out time to attend meetings at Iconix on almost a weekly basis. She spent the evening before the photo shoot going over potential campaign looks with a stylist, for example.

“I used to go to a Lycée and everything was in French. It’s such a change of vibe and everybody is so great at LaGuardia,” said Leon, whose father, Carlos Leon, has received positive reviews for his performance in the recently released indie movie “Immigration Tango.” “I have, like, four hours of drama a day. They have the musical theater department where you can audition for one of the musical theater shows, but that’s not until later in the year. Right now we’re just working on some scenes that we’re doing. We show them to the entire freshman and sophomore classes at the end of April, so I’m really excited for that. Right now, I’m doing a scene about these, like, Catholic people. It’s really cool.”

When not shopping at Macy’s, Leon enjoys hitting up Bloomingdale’s, Forever 21, Urban Outfitters, American Apparel and vintage stores. “And I love Topshop. It’s like my sanctuary. They have so much great stuff there at the one on Broadway and Broome,” she added.

As for a clothing budget, she doesn’t have a strict limit, but Madonna won’t allow her to spend wildly. “Obviously, there’s a limit and my mom will get mad if I spend too much. She kind of says when you don’t really need it, you don’t need to go shopping. But I always end up kind of…pushing it,” she confided.

Material Girl launched in 200 Macy’s doors in August and for spring it has expanded to 250 doors. Fashion and embellished pieces have been selling better than basic items. Dresses, jackets and skirts have been the strongest categories, said Molly Langenstein, executive vice president of fashion and new business at Macy’s Inc.

“Where the customer has been more discerning is the tops category. Where it’s been solid and simple, it hasn’t been working,” added Langenstein. “We learned a lot this past holiday and we want to broaden categories beyond self-purchase items and increase gift-giving options, such as key item multipliers that mom would pick up.”

For spring, Iconix and Macy’s are introducing swimwear to the line, with Osbourne sporting a bikini top and shorts in one campaign image. Also new is a push into social event dresses, geared toward parties, proms and homecomings. This fall, major merchandising programs in denim and outerwear will be a key focus. “We see a lot of opportunity in those areas,” said Lanie List, chief merchandising officer at Iconix.

“There have been ups and downs and we’re learning what works and what doesn’t,” added List. “This is such a new category for Macy’s and it’s a new customer and it takes time to learn what she wants. We’re getting better and better at getting the formula right.”

Fragrance and beauty products are in the works and could potentially launch in the back half of the year, although the time line is not firm at this point. “Lola has been very involved with everything, such as selecting nail colors that are part of her own beauty regime,” said List. “The fragrance would be something fun that you grab at the register. It’s in development and we’re still working on it.”

On the day of the campaign shoot, Madonna herself arrived late in the afternoon to Bathhouse Studios to go over the day’s results, carefully scrolling through each shot with Leon at her side. At one point, Madonna suggested to her daughter that she style a scarf on Osbourne’s head in a way similar to how Leon sometimes does herself — and the resulting photo is now a key campaign image.

Asked if she saw herself gravitating more toward acting or fashion, Leon hedged her bets.

“I mean, I want to be an actress, but I love to style also. I don’t know what’s going to happen,” she demurred.