Topshop is banking on its customers' continuing appetite for denim this fall. 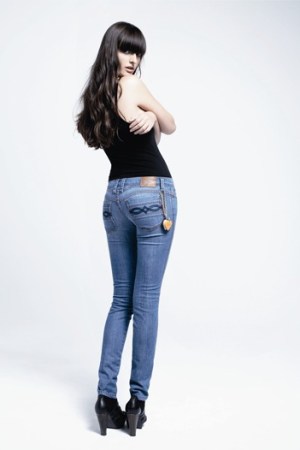 LONDON — Topshop is banking on its customers’ continuing appetite for denim this fall.

This story first appeared in the July 24, 2008 issue of WWD. Subscribe Today.

“People invest in denim,” said Antonia O’Malley, assistant buyer for concessions at Topshop, adding she imagined that customers would “mix up [the denim collections] with Topshop pieces.”

The premium denim area will sit in front of Topshop’s Boutique area that sells the retailer’s higher-end Unique line and its collections by designers such as Christopher Kane and Marios Schwab. Designers with collections in the Boutique area for fall include Louise Goldin, Markus Lupfer and Todd Lynn.

While the premium denim collections will retail at a significantly higher price point than Topshop’s own denim lines — Moto jeans start at 30 pounds, or about $59 at current exchange, while a pair of Radcliffe jeans will retail in the store for 150 pounds, or $300 — the retailer will bridge that gap with its own denim range created in collaboration with premium denim designers.

Both Sass & Bide and J Brand will design capsule collections for Topshop to bow in August and November, respectively. Dittos will also produce a jeans style for the store. Those collections will retail from around 75 pounds to 105 pounds, or $149 to $209, and will be sold at the Oxford Circus store and at Topshop’s New York flagship on Broadway, set to open in October. They will also be sold at selected U.K. stores and on the retailer’s Web site, topshop.com. O’Malley declined to give sales predictions for the exclusive collections.

To complete the premium denim experience, the Oxford Circus store will conduct a weeklong denim clinic beginning Sept. 8, where Radcliffe designer Suzy Radcliffe will advise customers on fits and styles. There will also be an alteration service, to which customers can bring their own jeans by any brand to be tailored to their shape.

“When we introduce a new fit, our customers are quite early to adopt it,” said Julia Davies, the retailer’s buyer for jeans.

Davies said a key look for Topshop for fall is Moto’s Pippa cut, a higher-rise skinny style with a drainpipe leg and tapered ankle. Alongside denim jeans, Topshop has produced denim playsuits and jumpsuits for fall.

She added that plenty of customers had been drawn to the sequined jeans Topshop has produced in the past and will carry during the holiday season. While Davies declined to comment on denim sales at the store, she said the category is “a significant part of Topshop’s business,” and that there was likely to be an area devoted to denim at the company’s 40,000-square-foot Broadway store.