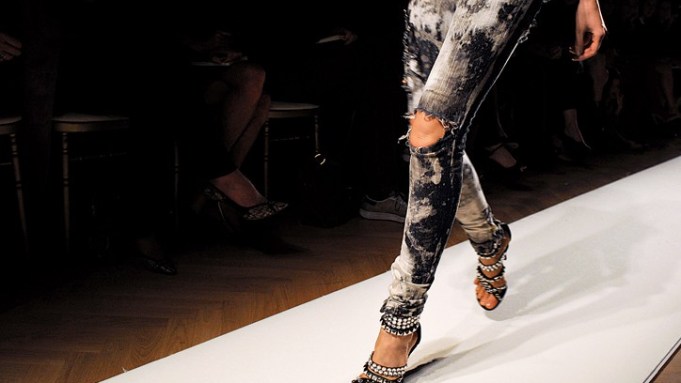 It takes a team of skilled craftsmen to make jeans that look like they’ve been run over by a truck.

At least one trend will be more battered than the economy in 2009.

Ripped, battered, paint-splashed or dirty denim, as spotted in spring collections from Balmain to Just Cavalli, point to a new extreme in vintage styles. “There’s a move toward ultragrunge, a lot of very big holes, very destroyed styles,” says Blandine Boudet, a fashion designer at Nelly Rodi, a Paris-based trend agency. “They’re really letting go,” she says, referring to mills at the Denim by Première Vision textiles show held in Paris in December.

Indeed, after making its comeback over the last two or three seasons, the vintage trend has evolved into a widespread movement, says Philippe Freedman, a designer at denim consultancy Rad Rags, noting that worn-out styles have trickled down both to the mass market and to retailers who were previously reluctant to put hole-riddled jeans on the racks. To wit, denim players are pushing the limits to see how far the trend will stretch. “We sell ideas more than the fabrics themselves,” says Paola Vettorazzo, area manager for North Europe and the U.S. at Italy’s ITV.

To find inspiration, ITV’s vice president of research and development, Paolo Gnutti, scours secondhand shops in Berlin, Tokyo, London and Los Angeles. “But only the very bad secondhand places,” he insists, noting that vintage stores in Paris, for instance, are often too chic to carry really destroyed styles.

Others road test jeans in physically demanding environments. “One of our wash designers went to a construction site next to the factory and gave 20 pairs of pants to a bricklayer, a painter, a steelworker and so on, and two months later took them back,” says Romain Narcy, marketing director at Turkish mill Ereks Garment Co. “He got a dozen different wash references.” On another occasion, when visiting a factory, the same designer spotted a worker’s battered old Levi’s and went on to create a new wash from them.

Nascent Italian brand Onvis is building its business in a similar way. The company sells its Bluevirgin raw selvage denim from about 45 euros, or $60 at current exchange, to 69 euros, or $92, via its e-commerce site, with a label telling its owner to “Use it, destroy it, live it.” The customer can then send a picture of his or her used jeans to Onvis, and if the company chooses to replicate that design, the customer will receive 1 euro, or $1.34, in royalties for every pair sold. The jeans are named after the previous owner, and all the details, from worn knees to whiskers near the pockets, are replicated. “We want to create washes that even people who are crazy about denim think are old, but we did it yesterday,” says founder Shannon Sadler, who previously worked for Replay. To kick-start the concept, Onvis will give away pairs to people with interesting livelihoods, a traveler or a photographer, say, auctioning off their original jeans once the wash has been copied.

It’s another initiative in the ongoing search to re-create vintage by authentic means, which has seen the denim industry return to manual methods after years of automation-driven production. “Everyone has their own system and their own recipes, but overall the industry has put itself into artisans’ shoes in order to be more precise and closer to natural wear and tear,” says Freedman. When denim sales plummeted some 12 years ago, Freedman recalls, designers turned back to grassroots methods to drive growth, since certain industrial techniques, like using laser technology to make whiskers, for instance, resulted in them going flat very rapidly. Today, laser machines are used largely in addition to manual treatments or for mass market products, Freedman says.

While many laundries keep their methods top secret, much of the worn effects currently à la mode are created using sandpaper of varying thickness on jeans placed on molds made of wood, metal or rubber. While consumers long have re-created distressed denim styles themselves, experts warn it’s not as easy as it might look. “A person at home might think, I can make this, but they could never get the same look,” says Edouardo Tavares, commercial director at Denim Authority, a Tunisian mill, referring to a worn and ripped effect.

“This goes through many hours of labor, lots of people doing this by hand, spending as much as 10 days in the laundry,” she adds. “The more destroyed, the more work there is.”