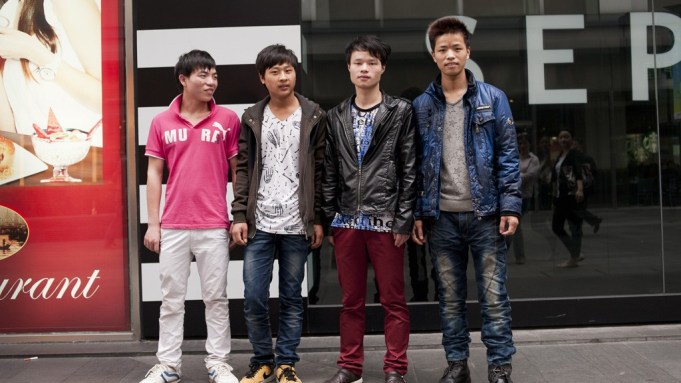 Denim may be acceptable in nearly any and all situations in the U.S. these days, but in Asia jeans are still seen as utilitarian and casual.

That’s both a challenge and opportunity for premium denim labels that need to fight harder to gain a foothold in Asia.

Many Asian consumers “don’t get the necessity of premium.” Cheaper-to-midrange brands tend to do better, said Richard Atkins, divisional manager for denim at Global Design Workshop, a denim branding and manufacturing consultancy.

Formal social clubs and restaurants across Asia sometimes still ban jeans, along with flip-flops, tank tops and shorts. Denim tends to be relegated to casualwear, making consumers more reluctant to spend large sums on such items. Japan’s more-developed consumer economy is the exception in Asia, with customers more willing to spend on expensive denim, but the country only makes up 23 percent of the Asian market. By contrast, China, with a developing middle class geared toward moderate prices, makes up 41 percent of the Asian denim market, although Chinese consumers are starting to show signs of loosening up their purchasing standards, at least on certain categories.

“Most of the time the Chinese consumer is more willing to spend on high-end handbags, but has not evolved enough to understand the premium attached to buying luxury denim,” said Amy Leverton, head of denim and youth at WGSN in London.

The definition of premium can vary by country, according to Euromonitor, but can include a range of brands as diverse, at least by Western standards, as Levi’s, Wrangler, G-Star Raw, Diesel and Jaeger.

Premium and superpremium numbers look high because expensive jeans sell at such a high markup, but the lower end of the market dominates in units sold.

To compare, sales of premium and superpremium jeans worldwide made up 35 percent of total volume. Across all markets worldwide, denim is expected to become increasingly polarized, with superpremium brands gaining further momentum and midpriced brands being squeezed out, said Magdalena Kondej, head of apparel and footwear research at Euromonitor.

While U.S. and European retailers are gaining traction in Asian markets, a number of premium wholesale brands have had a more difficult time. Leverton noted that a number of fast-fashion retail brands — H&M, Zara, Forever 21 and Topshop among them — “are springing up all over and are challenging equivalent local brands.”

Some Western wholesale brands have found the going harder, with distributor and franchise arrangements failing to produce meaningful sales within a given time frame. Companies with established branded identities have a distinct advantage over those just getting started in the brand-building process.

“You need to be big to actually sell here,” Atkins said. “If you’re up and coming, it doesn’t work.”

Since denim is a newer market in Asia, brand popularity is less concentrated. The largest brand in the region, Levi’s, has a 3.4 percent market share. Premium brands also face competition from local, generally lower-priced, brands. Out of all of the western premium denim brands, only a few have gained a following, and those that have tend to have global or at least multiregional recognition, such as Seven For All Mankind, G-Star Raw or J Brand.

Freda Lee, head of group marketing communications at Fairton International Group, the exclusive distributor for Seven For All Mankind in Greater China, says that “it’s relatively more costly to build premium denim brands in the Asia market due to consumers’ need for unique retail and brand experiences.”

Lee noted that Seven For All Mankind, part of VF Corp.’s Contemporary Brands coalition, is ahead of other players in running stand-alone retail stores, especially in Greater China. In the U.S. and Europe, much of the premium denim business is done in multibrand department stores, a retail channel not found in most parts of Asia.

Another challenge is marketing. Western denim brands often rely on “guerrilla marketing” and a play on a subculture or counterculture, but you can’t do it like that in Asia, said Global Design Workshop’s Atkins. “Guerilla marketing might work in Japan, but in China and Hong Kong it’s very different.”

Andreas Kurz, president of Akari Enterprises LLC, which advises apparel companies on opportunities for international expansion, pointed out, “The Chinese are still relatively underdeveloped on denim and they appear to be leaning toward the accessories brands as they get more involved in the premium and luxury markets. It takes a large investment to get into Asia and you’re dealing with markets that don’t have a lot of department stores. That means that to gain traction you have to make a large financial commitment and after that you’re pretty much on your own, having to pursue a monobrand strategy.”

Premium denim labels often focus on fashion and lifestyle, not only denim.

Mikael Schiller, chairman of Swedish fashion label Acne Studios, said denim sales in Asia and elsewhere have been fairly stable, although denim has become a smaller portion of total sales as other categories have grown.

“We had success with jeans early and decided we didn’t want to be a one-product brand,” he said. Jeans now make up about 20 percent of total sales, down from 80 percent a few years ago, so “we are not so dependent” on the one classification. With a broader line in place, Acne this month opened its first store in Hong Kong, a 613-square-foot shop that houses its ready-to-wear, shoes and accessories along with its jeans.

Schiller noted that competition in women’s denim is much more fierce whereas men tend to be very loyal.

At the other end of the market is Uniqlo, which is grabbing market share in Asia and elsewhere. Its Tokyo-based parent firm, Fast Retailing, plans to open 100 Uniqlo stores a year in China, for a total of 1,000 units in the near future.

“Uniqlo jeans are growing in popularity because we continue to offer a variety of styles to suit our customers’ needs. Our jeans are made of high-quality and innovative fabrics, and they are a very good money-for-value purchase,” said a Uniqlo spokesman. Uniqlo declined to break out denim sales figures.

Fast recently reported a 28.7 percent decline in profits for the year ended Aug. 31, with much of the drop-off caused by a loss at premium denim market leader J Brand, of which Fast acquired control in November 2012.

But while the hurdles for premium denim in Asia are high, market watchers say the potential growth is also good. Denim sales in Asia, including Japan, totaled $27.5 billion in 2013, up 1.5 percent from the year before. That compares with worldwide growth of 2.6 percent in 2013.

“The fact that denim doesn’t make up such a large share of the Asian consumer’s wardrobe could be a positive for denim growth in Asia,” said Kelly Tackett, U.S.-based research director at Planet Retail.