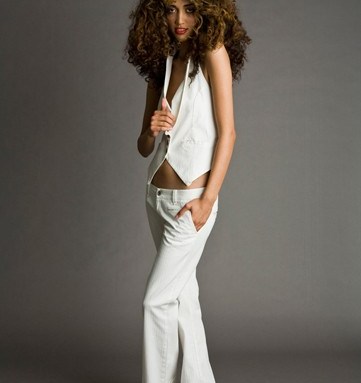 The designer who cofounded True Religion Brand Jeans with her husband, Jeffrey Lubell, but left last year after a much-publicized divorce, has partnered with accessories designer Giannci Genau to launch premium denim label Babakul for spring. Translated as “hippie” in French, Babakul is readying its first shipment of skinny jeans that zip tight at the ankle; wide-leg trousers; baggy boyfriend fits cut into shorts and jeans and tie-back vests. While men’s suiting fabric, plaid and stretch twill round out the portfolio of fabrics, Gold-Lubell said denim, most of which will be lighter cloths weighing as little as 9.5 oz., will make up 80 percent of the line.

“A lot of people were asking when I was going back in clothing. So here I am,” said Gold-Lubell.

She hasn’t stayed completely idle since announcing her departure as True Religion’s women’s designer in March 2007. She continued consulting with the Vernon, Calif.-based denim brand and launched a high-end jewelry line under the Babakul brand in August 2007. The experiment with jewelry lasted only a year.

“It was a great way to flex my muscles with something I hadn’t done before, but clothing was where I wanted to be,” said Gold-Lubell, who has clocked more than 20 years designing denim lines such as Bella Dahl and Hippie Jeans in addition to True Religion.

Gold-Lubell insisted that Babakul won’t compete with True Religion, the six-year-old denim line known for the horseshoe embroidery on its oversize back pockets. She envisions a customer who is sexy and sophisticated, and wants women to wear Babakul jeans in the same way that she and Genau do — paired with Chloé boots, Mike & Chris leather jackets and Givenchy and Louis Vuitton handbags.

“The difference between this line and what I did at True Religion is I want it to be really special,” Gold-Lubell said. “I want the distribution to be really tight.”

Her goal is to limit retail distribution to 200 doors of better department stores and specialty retailers in Japan and Canada, and on both coasts of the U.S. Retailers include Neiman Marcus, Nordstrom, Fred Segal Fun in Santa Monica, Calif., and Ron Herman and Lisa Kline in Los Angeles. With wholesale prices ranging between $84 and $92, Gold-Lubell said she projects hitting $5 million in first-year sales.

Despite her experience launching new labels, Gold-Lubell must contend now with the tough economy. That’s why she decided to limit the number of spring styles to 19.

“If you show a line that is narrow and deep…you are making a stand on what you want to show at retail and sell,” she said.

Still, she has a taste for the good life, particularly in accessories. Gold-Lubell said she wants to tap into Genau’s expertise with luxe skins to eventually add bags and belts crafted out of crocodile, snakeskin and leather.