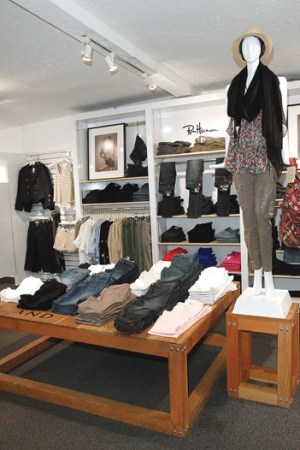 LOS ANGELES — Tick off a list of the major denim brands that have launched in recent years — Current/Elliott, J Brand, Paige Premium Denim, Citizens of Humanity — and it’s a good chance Ron Herman has played a role in their ascent.

With denim at the core of his assortments, Herman has set out to bottle the Southern California lifestyle in his stores. His knack for ferreting out brands that translate that lifestyle into clothes — whether they’re from the region that gave birth to it or created by foreigners in far-flung global outposts — gives them a venue to introduce their wares.

“When it is new and cool, Ron has it,” said Jeff Rudes, founder and chief executive of denim specialist J Brand, which launched at Ron Herman in December 2005.

To bigger retailers, a brand’s presence at Ron Herman is validation the label can work elsewhere. And plenty have tried to copy the Ron Herman concept, but often without much success.

“This store has been an inspiration for so many companies that wanted to go into retail,” said Maurizio Donadi, senior vice president of Levi Strauss & Co.’s premium division, XX. “There is an aura there that is quite unique.”

Gene Montesano, who founded Lucky Brand with Barry Perlman, speaking from the Los Angeles offices of Civilianaire, his new brand with Perlman that is available at Ron Herman, said, “If you are a retailer and you are coming here from Istanbul, you are going to stop at Ron Herman. It has been like that and it is still like that.”

Nina Garduno, who was vice president of men’s wear at Ron Herman for years before deciding to devote herself full time to building Free City, the hoodies and sweatpants-driven brand that has its own store on Highland Avenue in Los Angeles and is sold at Ron Herman, explained Herman demonstrated that jeans brands from Europe could thrive in Southern California. “He was the first guy to really bring the European jeans movement to America,” she said, citing brands including Diesel and Replay.

Garduno recalled fond memories of traipsing through countries like England, Holland, Spain and Japan with Herman on the hunt for great merchandise.

“He is willing to get in any taxi, any train, any car to go find it and fight for exclusives to get it,” she said, recounting, for example, that Herman discovered Katharine Hamnett when the English designer was washing the garments that she sold in her own washing machine. “You would see what she made and it was still wet. He found her and placed the first order with her.”

Perlman noted that Ron Herman pioneered the jean bar, a merchandising idea that has been picked up by many stores.

“He’s known for carrying the newest, greatest stuff,” Perlman said. “You would go to the jean bar and have jeans from all over the world.”

Herman also is cognizant to present brands — denim or otherwise — in ways that communicate their stories. In the Melrose Avenue store at the moment, for instance, there are extensive product displays from Oliver Peoples, L’Agence and Forte Forte that convey the breadth of the assortment as well as the rationale behind the brands — whether it be using reclaimed silk, as Forte Forte does, or updating chic vintage styles for modern sunglass consumers, the way Oliver Peoples does.

Levi’s Vintage Clothing launched about a year ago with substantial space at Ron Herman dedicated to its replicas of styles from Levi Strauss & Co.’s archives.

“It’s a perfect destination for the brand that we are building,” said Donadi. “It is very important for the store to generate sales, but also, because we are showing to customers and buyers from all over the world, from Japan to Europe, what the brand is all about, it is an important showroom for us.”

Rudes also pointed out that Ron Herman is able to move the merch because he and his buyers, including denim authority Brian Kaneda, nail down the right product for leading-edge customers. “He turns more than we probably do at any other retailer with similar floor space,” Rudes added. “The selection he buys from us is the best of the best.”