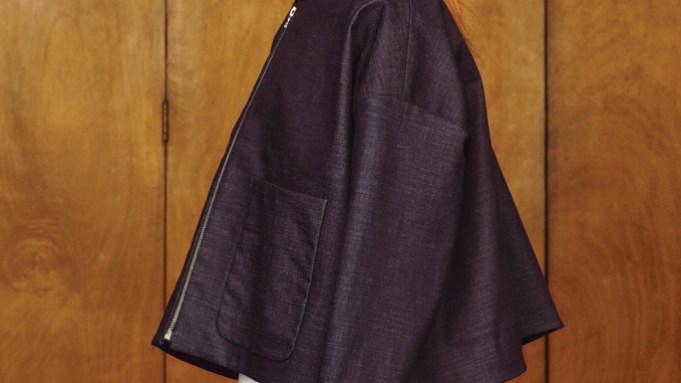 Flicking through the rails of her new Victoria Victoria Beckham resort collection hanging in her cavernous Dover Street store in London, the famous proprietor and brand namesake already plotting how she’ll work the designs into her wardrobe. “When I’m on holiday, I’ll wear one of these little dresses,” Beckham told WWD, picking up an empire-line camisole dress in deep marigold, before singling out a boxy denim jacket that she’ll wear with “jeans and one of our new T-shirts.”

“I’m really excited about this collection — it’s exactly what I want in my wardrobe, these are things that I want to wear, and I think these are things that my customer wants to wear,” said the designer, who today cuts a sleek, tanned figure in a sleeveless black top and pants from her pre-fall collection, with a yellow, oblong-shaped diamond ring sparkling on her finger.

The resort collection is the first Victoria Victoria Beckham collection to encompass the designer’s denim line. And the fusion of the two lines happened “quite naturally,” she said. “It’s something that we wanted to do as a team for a long time,” added Beckham, who had launched VVB chiefly as a dress collection in 2012. “We’d been focusing on dresses, so it’s been great to be able to have jeans and shirting, [too].” Meanwhile Zach Duane, chief executive officer of Victoria Beckham, said while both the VVB collection and Victoria Beckham Denim line performed “with strong sell-through and overall seasonal growth,” he believes that by presenting the lines as one collection “the…impact to the business will be greater.”

The collection for resort has a bold, youthful spirit, with Beckham working up strong yet feminine silhouettes, in a palette that contrasts striking reds and deep yellows with black, white and pastel blue. Beckham drew inspiration from the circus, inspired by what she called its “fun, colorful attitude,” evinced in elephant and big-top motifs on dresses and an acrobat-and-dancing horses print on a yellow silk pantsuit. There’s also a print inspired by a flower that had caught Beckham’s eye when she was designing the collection in China during a trip there earlier this year, which she’s done in yellow, blue and red on a roomy tank minidress with fluted chiffon skirts.

The looks span the dramatic — such as a white cotton piqué dress with cape sleeves embroidered with dancing elephants — to quieter ensembles. One black wool gabardine minidress has subtle vinyl flowers at the hem — that can be removed, should the wearer wish — while there are short-sleeved blouses in crisp cotton with full, fluted sleeves, and jeans that run from wide-leg denim culottes to skinny, faded jeans patched with vinyl flowers. The collection will also include the denim line’s core fits, alongside the more fashion-led designs.

But while there’s a strong design direction, Beckham is adamant that the customer is first when she’s creating the collection. For example, she underlined that there’s “nothing challenging” in the more voluminous looks in the lineup. “It’s done in a really flattering way…it’s just fun and cool and fresh.”

Prices for the collection run from $215 for a jersey kick-sleeve T-shirt through to $1,895 for a leather jacket with appliquéd flowers, and Beckham emphasized that she doesn’t see it as a diffusion line. “[They’re] designer clothes, slightly less expensive, but without compromising with regards to design or fabric. We’ve had a lot of feedback from our retail partners that this space wasn’t being occupied by anybody,” said Beckham, explaining the collection’s new positioning. Added to that, retailers were often sitting her denim line next to the VVB collection. Duane pointed out that the merging of the two lines won’t mean a change to their distribution, with the collection having potential to sit as a complete lineup within a designer environment, while the core denim styles could sit within denim departments.

And as to the woman who wears the line, Beckham described her as the same person who’s a fan of her mainline collection, “but it’s the other side to her wardrobe. I think there is also a younger customer as well…[but] I have a lot of friends who are my age, my mum friends, who don’t buy the [mainline] collection who love VVB,” she said.

Considering fashion’s current Nineties obsession, Beckham — who knows more than a little about the trends of that decade — said while the era has “influenced” her collections in the past, she’s so far holding back on nostalgia for her own Spice Girl outfits of the period. “I’m not sure that any of my particular looks from the Nineties will be inspiring us — they will probably be horrifying most of my team,” she admitted with a wry smile. “I wouldn’t say my PVC catsuits would be reappearing, put it that way.” She also swatted away the latest rumors of a Spice Girls reunion. “I really support [her former band members] in everything they do and they’re so supportive of what I’m doing, but I couldn’t possibly do that,” she said of a reunion. “It was great when we did the [London] Olympics…but I won’t be doing that anymore,” she said. “I’m so busy with what I’m doing here, with all the collections and all the categories — and first and foremost I have a husband and children and so I wouldn’t be able to do that,” she said of the prospect of reforming the band.

What of her family’s increasing involvement in the fashion sphere, with husband David signing a deal last year with Global Brands, and eldest son Brooklyn appearing on the cover of British magazine Rollacoaster this month? “We really support each other, [but] what we do is very, very different,” said Beckham of her and David’s ventures.

Brooklyn, meanwhile, enjoys the “creative process” of a shoot, Beckham said. “He’s just finished his GCSEs [U.K. high school exams] and so he’s done a couple of shoots. He loves photography and art, so for him when he does the occasional shoot it’s more than just him having his picture taken,” she said. Though perhaps aside from Victoria’s, the most envied Beckham wardrobe belongs to that of her three-year-old daughter Harper. Last week, a collection of Harper’s outfits that Beckham had donated to Save the Children — among them Chloé, Charlotte Olympia and Stella McCartney designs – had customers queuing round the block in London to buy the hand-me-downs. “Was I expecting the success of selling her clothes?” mused Beckham. “I knew a lot of people would like them because they were in really great condition and they were beautiful clothes…and it’s great that when she has grown out of them that somebody else can enjoy them.” And the experience has clearly given Harper a buzz: After donating her clothes, Beckham related that the altruistic toddler has since “been through all of her teddy bears and lovvies that she takes to bed,” and volunteered to donate those, too.

But aside from the family’s perennial celebrity status, Beckham’s fashion business is clearly gathering momentum. Alongside the new VVB collection, she’s planning to open a store in Hong Kong early next year, with stores in U.S. locations such as New York, Miami and Los Angeles on the cards after that. She’s also got what she called a “very exciting” project in the works, but was mum on further details, and said she’d be keen to delve into categories such as “shoes or children’s or men’s. I’d love to at some point when the time is right.”

But for now, she said, “there’s an enormous amount going on.”