Men’s denim sales took a slight dip in the past year as consumers concentrated more apparel spending on sportswear categories. 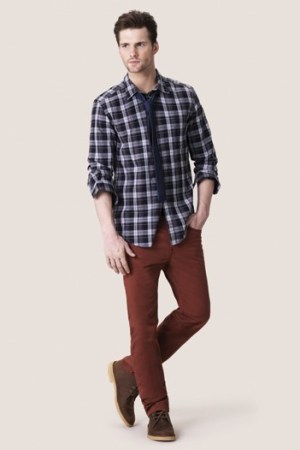 Men’s denim sales took a slight dip in the past year as consumers concentrated more apparel spending on sportswear categories. For the 12 months ended in February, men’s denim sales slipped 2.9 percent to $5.15 billion from $5.3 billion in the year-ago period, according to The NPD Group figures. Unit sales dropped 3.4 percent to 218.4 million, while the average price of each unit inched up 0.5 percent to $23.58.

The drop in denim came as men’s sportswear sales increased 2.4 percent in the 12 months ended in February to $34.53 billion.

Despite the small overall drop in men’s sales, many brands in the premium sector have experienced strong growth over the past year, as category leaders like True Religion, Seven For All Mankind and AG Adriano Goldschmied took market share from smaller, less established players — which observers attributed to retailers that are consolidating their buys.

At True Religion, the men’s business has outpaced women’s and now represents more than 50 percent of sales. “We find men are much less resistant to price, even in our current economic situation,” said Jeff Lubell, chairman and chief executive officer of the Vernon, Calif.-based firm. “This is particularly true in our own stores. The average price of men’s jeans in our stores is well over $250.”

In the first quarter of the year, True Religion posted a 37.6 percent increase in sales in its 97 domestic stores, including a 7.4 percent comps gain.

Handcrafted washes with innovative details like one-of-a-kind shank buttons and rivets made from reclaimed tin signs are driving sales at True Religion, said Lubell — but the company also is focusing on adding less embellished styles to its merchandise mix. This fall, True Religion is introducing a new “Phantom” group of styles, providing an alternative to its usual boldly branded product. “Although embellishments are still important in the market, and will be important for our brand, there is demand for cleaner pocket styling and less stitch detail,” said Lubell.

At crosstown rival Seven For All Mankind, which is owned by VF Corp., men’s sales are also outpacing women’s. “Men’s buyers did not reduce their inventory levels like women’s did during the recession. As a general rule, the men’s business is less trend-driven, and so the assortments were kept diverse, which put them in a better position for a rebound,” said Susan Kellogg, president of VF Corp.’s contemporary brands coalition.

In washes, Seven For All Mankind is turning toward more vintage washes and away from the cleaner looks it’s best known for. “Men’s denim is heading away from the clean, dark look that has characterized the past few seasons and moving more toward authentically distressed styles,” said Kellogg.

As at many denim makers, non-indigo colors are becoming more important at Seven For All Mankind, including blacks, grays, browns and even brick red. Corduroy and chino styles in jeans fits are also key components of the mix.

Year-to-date at AG Adriano Goldschmied, sales are up 30 percent over 2010, with men’s comprising about 35 percent of total sales. The company is forecasting total brand sales of $80 million to $90 million this year.

“We’re seeing big-time increases in our slim straight leg ‘Matchbox’ fit,” said Sam Ku, men’s designer at the brand, owned by Southgate, Calif.-based Koos Manufacturing Inc. Prices for cotton and other raw materials are up about 20 to 30 percent for the company and that’s been reflected in retail prices. “It hasn’t been a huge price increase. It’s been very fair and there hasn’t been much resistance at retail,” said Ku.

At Diesel, price increases on raw materials led the company to phase out some longtime carryover fabrics and washes. “We worked hard to develop a new range of fabrics and washes, with a clear added value,” said Stefano Rosso, head of strategic brand alliances at the Molvena, Italy-based denim giant. For fall, Diesel is taking comfort to a new level with its JoggJeans, which are fashioned from denim that combines the properties of a jean and a sweat pant.

In its core denim line, Diesel is out to make a strong statement with washes that have lots of hanger appeal. “We believe that strong vintage and ‘visual’ washes with an immediately recognizable added value will still be the key,” said Rosso. “As a consequence of this mood, the market is also moving faster to an original workwear look, with a Fifties inspiration.”

Similarly, A|X Armani Exchange is pushing classic vintage washes and fits for fall. “The overall trend is authentic denim — authentic in fit with a classic straight leg, authentic in wash with light distressing and natural wear and authentic in details with minimal embellishments,” said Patrick Doddy, senior vice president and brand director at A|X Armani Exchange. “Slim fits are still growing in popularity and the drop-crotch also continues to make an impact.”

Citizens of Humanity is focusing on slim and skinny styles as the key fits for fall and holiday. “We don’t see that trend slowing down, in fact it’s becoming more and more relevant in the U.S. market,” said Jenn Liss, men’s brand manager at the Huntington Park, Calif.-based brand. “We’re introducing a superstretch denim in slim fits for men’s, which has been an important fabrication in women’s. It has a great degree of stretch and it’s incredibly comfortable.”

At Ridgefield, Wash.-based Agave, 60 percent of the business is in stretch denim. “The technology has advanced so that it really holds its shape over time and doesn’t have that shine,” said founder Jeff Shafer.

Sales at Agave were up 25 percent last year. “There are less players now than there used to be — or less meaningful players,” pointed out Shafer. “I think most stores are really narrowing their core vendors. They know which brands work for them.”

Replenishment is a big part of Agave’s business, accounting for 40 percent of sales. The company offers 24 styles on a replenishment basis. “A store can order a size run from us and then reorder what they sell and have it back in stock within a week,” said Shafer. “It shifts a lot of the burden for inventory management to us.”

Stretch denim is also a big part of the assortment of DL1961, a brand that focuses on very clean, contemporary washes. “I do think you have to set yourself apart and for us it’s a special formula with XFit Lycra that provides ultimate comfort,” said Betsy Rodopoulos, who oversees men’s sales at the New York-based brand, owned by Pakistan-based manufacturer ADM Denim. The line launched primarily in women’s in 2008, and is now making a larger push into men’s for fall.

On the opposite end of the style spectrum from DL 1961 is Los Angeles-based Cult of Individuality, which pushes novelty washes with lots of destruction and fraying. “Every brand has to have a reason to be. Even if 80 percent of the market is clean and conservative, then the other 20 percent is looking for forward and novelty washes and I have no problem being part of that 20 percent,” said Ron Poisson, who is a partner in the brand with a Guangzhou, China-based vertical manufacturer. “The denim market has become very inundated with dark, clean, conservative washes. Retailers say our product brings personality to the sales floor,” said Poisson. “We are not about the mundane.”

Despite all the action in the premium segment, though, observers believe the men’s market overall will struggle for a bit longer before seeing a rebound. “What we’ve seen is a little loss in the fashion cycle of denim. There’s nothing dramatically new,” said Marshal Cohen, chief industry analyst at Port Washington, N.Y.-based NPD. “The men’s denim business was better earlier, as coming out of the recession guys bought jeans. Now, they’re looking at other areas of their wardrobe to complement their denim. I expect another few months of flat sales to slight declines in denim and then it will come back.”