The capital of premium denim is stuggling to come back from retail closings. 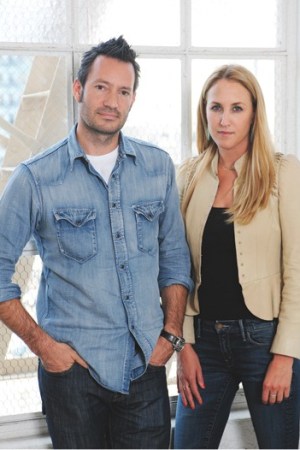 LOS ANGELES — For women’s denim brands, finding a retail home can be a struggle.

With a spate of store closures and switch by some high-profile retailers to an all men’s format, it has become increasingly difficult for women’s jeans brands to find a spot in a specialty store. The reduction of stores in California is particularly disheartening for companies based in Los Angeles, considered the world’s premium denim capital.

Emerging from the Great Recession, the retailers that remain in business have trimmed the number of women’s denim labels they carry, and are enforcing a stringent number of requirements for picking up new ones. Even worse, several stores are having problems paying vendors.

“It’s not easy right now, running a business,” said Drew Bernstein, chief executive officer of Kill City Jeans, here. “We find it tough to get as many bookings as in the past.”

The list of retail closures is long and growing.

In 2008, longtime retailer Tracey Ross threw in the towel for her namesake boutique on Sunset Plaza, tossing out denim brands such as Hysteric Glamour and Work Custom Shop. Intuition, which carried labels including Dégaine, followed suit. Fred Segal Fun in Santa Monica, Calif., which at one time carried Artisan de Luxe, Jet Jeans and Pray For Mother Nature, among some 40 denim brands, closed last year.

Planet Funk, the 22-door chain that ran a denim loyalty program awarding shoppers a free pair of jeans after buying seven pairs at its stores, also went belly-up last year. After celebrating its 10th anniversary in 2010 with Hudson Jeans, Serfontaine and other jeans makers, Blue Bee suddenly shuttered its doors on March 8. Atmosphere, which sold Blank and other brands, turned off the lights for good in Los Angeles’ hip Los Feliz neighborhood in late April.

Moreover, Confederacy in Los Feliz and Lisa Kline on Robertson Boulevard, which served as commercial venues for Current/Elliott and James Jeans, respectively, are moving into the growing but underserved men’s market.

While J Brand holds a fortunate position as a top seller in stores including Ron Herman and Hillary Rush, Rudes noted that the denim retail market has shifted dramatically.

“Denim was sold all by itself a few years ago — all you had to do was ship it, and it sold,” he said. “Those days are over. [Retailers are] only going with the ones that do well and have a fashion sensibility that goes with their store.”

As a result, retailers are becoming less flexible as vendors are bending more. Michael Glasser, an apparel industry veteran whose list of credits for co-founding jeans brands runs from Seven For All Mankind and Citizens of Humanity to Rich & Skinny and Cj by Cookie Johnson, said he noticed a change in retail dynamics starting 18 months ago, when buyers started flexing their upper hand and requesting product from new vendors to be sold on a consignment basis.

“Instead of bringing in fresh new stuff, they pull back and rely on their old vendors,” he said. “They’re comfortable that their gross [profit] margins will be met at the end of the season.”

To protect themselves further, retailers have implemented new rules and practices.

Christy Hall, co-owner of Kalifornia Jean Bar, which has three locations in California and Nevada, has halved the number of brands to 15 from the 30 that she carried during the denim boom between 2006 and 2008. She also tightened the size run for jeans, ordering 10 to 12 sizes instead of 20 and taking special orders for sizes outside of that range. Though she orders heavily from established labels such as AG Adriano Goldschmied, she said the biggest way to differentiate her store is to test new lines such as Bleulab and Resin that haven’t been scooped by major retailers yet.

“I’m trying to get lines that department stores aren’t carrying just so that we don’t have to deal with markdowns,” Hall said.

Swap-outs are also key. Elyse Walker, who operates a namesake boutique selling shoes, accessories, designer labels and denim brands including Acne, Genetic Denim and Thvm in Pacific Palisades, Calif., said she calls jeans manufacturers within 30 days of receiving a shipment if a certain style isn’t selling. By doing so, she can swap out the dud with a more popular version before the bill is due.

“That helps make us superprofitable,” she said. “I don’t get to do that with my shoe business and designer market. I wish I could.”

At the same time, Walker said she elevated the criteria for ordering a new brand.

“If it doesn’t get press and it’s not in all the magazines and not backed by a major showroom, my customer is never going to hear about it and she’s never going to wear it,” she said.

One denim brand that passed Walker’s test was Mother, launched this spring by Tim Kaeding, the former creative director of Seven For All Mankind and Lela Tillem, a sales director who opened the showroom that represented Seven in 2000 and also handled sales for rival denim brand Citizens of Humanity.

Kaeding said he challenged himself to create an innovative concept covering branding, packaging and exclusive fabric from top denim mills. He even drew up an entire line and then scrapped it.

“I have to impress myself or forget it,” he said. “The naïveté of the industry is sort of gone. You just can’t jump into it and make a mint and be very successful. You have to come up with a product that is unique and special.”

Designers and executives of new denim companies also have to invest more in themselves. When Los Angeles-based Doctrine Jeans launched its men’s business last fall, it spent close to $100,000 to produce four to six styles before receiving a single order.

“It was a difficult decision,” said Paul Sung, a company principal who previously owned a denim company called Baxis. “We had to [do it]. How do you send out a message without a product?”

“Even that, I consider it to be a lot of luck,” Sung said. “I think a lot of companies do the same but do not get noticed, especially in this economy.”

Los Angeles-based James Jeans is exploring alternate routes to grow its distribution. When James started shipping in 2004, it counted on specialty stores for 60 percent of its business and department stores for 40 percent. Now, specialty stores contribute to 30 percent of sales whereas e-tailers such as Shopbop.com make up 30 percent, with department stores retaining their 40 percent chunk.

Not all retailers share the struggle. American Rag Cie is expanding its World Denim Bar, which carries 75 jeans brands at its location on Los Angeles’ La Brea Avenue. After unveiling the concept in its store in Newport Beach, Calif., on April 8, it’s set to open additional units under the name Industrie Denim in Scottsdale, Ariz., and San Francisco in August, then in Seattle next year. Selling only on consignment, the World Denim Bar in Los Angeles relied on men for 70 percent of its sales until two years ago, when it changed its layout to place women’s styles in the middle of the shop. Women’s jeans now make up about half of sales.

Jennifer Althouse, buyer for World Denim Bar, explained, “As we open more denim bars, we are catering more to women because we feel there are more women shoppers than men.”

California was hit harder than most states by the recession, resulting in many stores shutting their doors. Among the notables were: