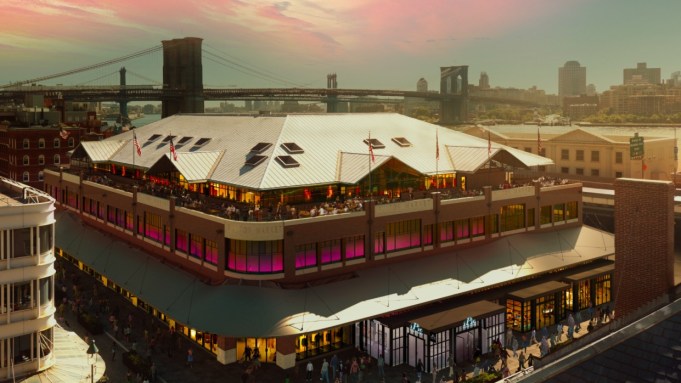 In an agreement with real estate group The Howard Hughes Corporation, the store founded by Carla Sozzani will open a unit in the Seaport District in June 2017. Covering about 13,000 square feet and designed by American artist Kris Ruhs, this will be the retailer’s only U.S. location. Financial terms of the arrangement were not disclosed.

Speaking exclusively with WWD, Sozzani, who conceived and established 10 Corso Como’s first store in Milan in 1991, said she particularly liked the district since “it’s not a traditional area, it is new but also one most linked to the city’s history and origins, over the docks, with the Fulton Fish Market [dating back to 1822] and a view on the river. Its history of international commerce and innovation is inspiring.”

Howard Hughes is revitalizing the area and Sozzani said that the group’s chief executive officer, David R. Weinreb, realized “how 10 Corso Como changed its surroundings” in Milan when it first opened.

“Some four and a half years ago, I made the original call to Carla, singularly focused on bringing this store, not any other, to Seaport District. I identified 10 Corso Como as one of the most dynamic retail concepts in the world. [Over the years], I have built a close friendship with Carla and Kris and I believe that her store embodies the future of retail with its experiential environment,” Weinreb told WWD.

“Given the Seaport District’s history as the city’s birthplace of innovation, we have been sharply focused on curating cutting-edge experiences across food, entertainment, fashion and culture,” he added. “This moment is a high point. Bringing such an important and influential brand in the creative and fashion sectors to the Seaport District will be a tremendous addition to New York.”

Weinreb said 10 Corso Como was “a consummate example” of the group’s vision for the area. Sozzani “pioneered a retail concept that brings together fashion, cuisine, art, music design and lifestyle” and 10 Corso Como is “a living magazine.”

The project is “very consistent with what has been announced to date,” said Weinreb. The district will encompass seven buildings totaling more than 400,000 square feet of culinary, fashion, entertainment and cultural experiences, including a 40,000-square-foot food market by Jean-Georges Vongerichten in the restored Tin Building. In the new Pier 17 building, the chef, as well as the Momofuku Group led by David Chang, will open restaurants. An iPic Theater will stand next door to the new 10 Corso Como. Pier 17 will feature a rooftop covering 1.5 acres for fashion shows, concerts, a winter village and special events, as well as restaurants and bars.

“For the redevelopment of the historic district and Pier 17, we will be investing more than $500 million, of which the majority spent to date has been using our own cash,” said Weinreb.

Sozzani believes New York does not need another fashion store and she is looking at selling more design pieces and creating a meeting point. “There is a very interesting social evolution, young people are all connected through the Internet, but there is an increasing new desire to socialize, to meet and converse, live an experience, as there is so much out there in terms of offer,” observed Sozzani.

She said that the art gallery in Milan’s store is the “heart” of the venue. “I will focus on hospitality, food and beverage, a lifestyle café, and present small, unique objects to discover, and do research, scout new talents,” she said of the New York store, which she compared to an “Italian square.”

Weinreb expects Sozzani’s expertise as a curator will ensure the store “will evolve with the market.” He highlighted the “ongoing evolution of the products, including fashion to that new experience.” The store will take shape over a period of time, he said, “perhaps adding new elements that resonate with the New York consumer, including initially beginning with a larger lifestyle component than other 10 Corso Como stores.”

“There will be very specific installations by world-recognized designers for our store only, and a lot will evolve as we plan. Carla is the expert and hers is the final decision.”

He noted that Sozzani is also revisiting products carried in her original store, which marks its 25 years in business this year. In his position, Weinreb realized that “the core responsibility is staying current and relevant and Carla knows how to do that better than anyone.”

“Carla is an amazing transformational visionary with a work ethic second to none. I share and support her vision. She is driven, a strong, thoughtful leader, very passionate, and her hand print is on everything that happens. The way she keeps up with all the stores around the world is amazing,” observed Weinreb.

In addition to the Milan flagship, 10 Corso Como has stores in Seoul, Shanghai and Beijing.

“Lower Manhattan is becoming increasingly more important; it’s nice to do something for the local community,” said Sozzani, who was on her way to Shanghai to fete the third anniversary of her 10 Corso Como store there.

In the 15 years following September 11, Lower Manhattan has transformed into an ever-evolving destination for companies in the creative, media, technology and financial services sectors, Weinreb pointed out, noting that the area has over 500,000 office workers and over 800 companies in the creative and media sectors. It has also become one of the fastest-growing neighborhoods in the city, attracting affluent, well-educated New Yorkers with average household incomes exceeding $200,000, he said, adding that 31 residential buildings totaling 5,227 units and 23 hotels are scheduled for completion by 2018.

The Seaport District, with a view of the Brooklyn Bridge, Statue of Liberty and the city’s skyline, attracted about 15 million visitors annually prior to beginning its redevelopment.