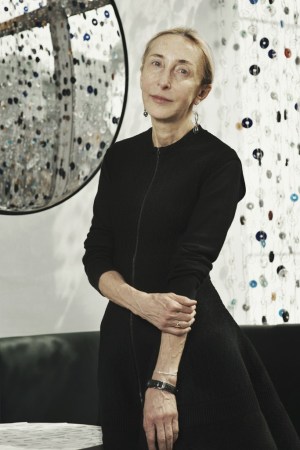 SEOUL — Carla Sozzani, one of the fashion world’s most influential retailers, is here to open the fourth location of 10 Corso Como in an unlikely spot: a gigantic department store.

“The whole point of 10 Corso Como is for people and friends to meet and a destination could be anywhere. It depends on what you do with it,” she said.

The 13,638-square-foot store, Seoul’s second outpost of 10 Corso Como, occupies the entire fifth floor of AvenueL, a luxury shopping complex in the Lotte department store, located in the central Myeongdong district. It opens its doors Saturday.

“Because we’ve never been in a department store, I wanted three major points — natural light, high ceiling, and original walls — all to keep a human feeling,” said Sozzani, who crafted the space along with her longtime collaborator, artist Kris Ruhs.

The store features large luminous windows, colorful geometric drapes, a rose-petal mosaic wall design, and decorations in the store’s signature black-and-white dots. True to the aesthetic of other 10 Corso Como stores, it is packed with artistic touches including an entire wall and ceiling of Ruh’s paintings of various faces and characters expressing delight. This work, entitled, “Facebook,” commemorates the new store and its images are printed on souvenir T-shirts available at the boutique.

Comme des Garçons occupies a large section of the store, which sells a mixture of labels including Azzedine Alaïa, Balmain, Marni, Lanvin and Thom Browne. Because its scale is smaller than its usual shops, the cafe’ offers drinks, desserts, panini and salads rather than full meals.

Sozzani also insisted on bringing another definitive feature of her Milanese boutique — an open garden. Lotte  agreed to renovate the bridge space between the department store and AvenueL with greenery, benches and fountain designed by Ruhs.

Cheil Industries, the fashion arm of Samsung Group, which joined up with Sozzani two years ago to open Seoul’s first 10 Corso Como in the rich southern neighborhood of Cheongdam, came up with the idea of opening a second location in Lotte. Sozzani admits she wasn’t sure at first. But after several visits, she developed a fondness for Myeongdong, a shopping mecca and major tourist destination.

“I came to love this area for its busy life and being the old part of Seoul,” she said. Sozzani’s concept of “slow shopping” — taking time to enjoy shopping and its experience — appears to work with Koreans, despite their culture’s reputation for lacking patience.

The retailer said she thinks the store’s selection of merchandise, including everything from art books to Delvaux bags, resonates with customers here. “I don’t see why you should rush,” she said.

“Koreans are very fashion-oriented [and don’t copy others]. They like fashion with more classical touch,” she reasoned.