About one thousand Maison Martin Margiela pieces, mostly unworn, will be sold from the estate of Marcia Berger. 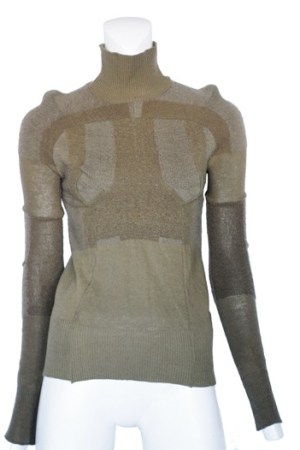 NEW YORK — Next month, 1stdibs.com will team up with vintage clothing retailer Resurrection to present “Resurrection’s 20 Years of Martin Margiela (1989-2008): The Marcia Berger Collection” — an exhibition and subsequent sale of about 1,000 Maison Martin Margiela pieces.

Berger, who died in Los Angeles in 2008, was obsessed with clothes and collected Margiela for almost two decades. After her death, the owner of the estate contacted Resurrection founders Mark Haddawy and Katy Rodriguez, who operate vintage boutiques in Los Angeles and New York.

Berger also had many of Margiela’s one-of-a-kind artisanal pieces she had preserved like works of art.

“These clothes were never worn,” Haddawy recalled of the process of uncovering the estate. “She bought them, and they left the store in a garment bag, and they were in a garment bag when we saw them. They all had the tags on them. It was an amazing experience to uncover them, not knowing what would come out of the box — and all of a sudden pulling out the military sock sweater from 1991, for instance. A lot of those clothes were extremely rare.”

The collection includes such pieces as a 2001 vintage kid glove-assembled top from 2001, a 1997 dress form top and a 2007 vintage belt assembled jacket. The sale also will feature accessories and footwear, including Margiela’s iconic Tabi split-toe shoes, and jewels made from soda tabs, belt buckles and resin.

“It’s hard to imagine there is another collection of Margiela like this in the world,” Haddawy added. “She was really collecting it in the day. A lot of people collect something after the fact. She put the collection together in real time. She sees the pieces on the runway and says, ‘This is what I want from the collection’ and buys those pieces. With Margiela, she had not only those pieces but she also bought the artisanal pieces, which were more eccentric and more one-of-a-kind.”

Resurrection and 1stdibs.com are staging an exhibition of 350 key pieces, which will open to the public at a temporary gallery space at One Jackson Square in mid-February, after a Feb. 12 party to kick off the sale. Clair Watson, the antique and vintage clothing expert and former couture director at auction house Doyle New York who oversees the vintage couture section at 1stdibs.com, is working with Haddawy on the installation.

The Web site, which added vintage couture to its repertory last summer, is also creating the online catalogue of the top pieces.

“I love the whole story of this woman who created this collection,” said Michael Bruno, founder and president of 1stdibs.com. “The idea of how someone can become so singularly obsessed with one thing was always really fascinating to me. Because Marcia Berger was so obsessed with Margiela, she really had collected all the best pieces.”

Bruno didn’t know whether Margiela, who never showed his face to the public, would attend the party next month to see his best works.

“Of course we can hope,” he said with a laugh. “He can have a private tour if he wants.”