The boutique encompasses the brand’s full range of ready-to-wear, accessories, jewelry and for the first time: men’s wear. 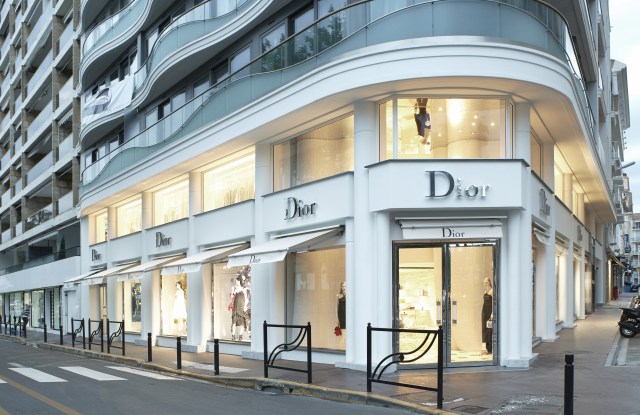 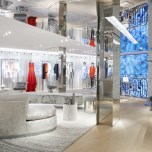 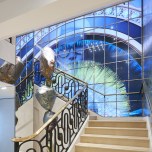 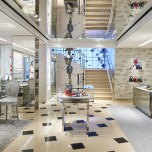 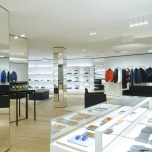 “Cannes and Dior go a way back,” is how Christian Dior chief executive officer Sidney Toledano explained the French maison’s choice to set up a new flagship at number seven on the city’s famous Boulevard de la Croisette.

The executive showed off a photograph of Michèle Morgan sporting a luscious satin gown with floral ornaments on the front page of Paris Match in 1956. This was the first time the brand dressed an actress for the International Cannes Film Festival. But many more would follow. “It really took off in 1998. No surprise — that’s when I became president [of Christian Dior Couture],” Toledano reminisced.

Opening today, the boutique arguably enjoys the best view of the famous red carpet entry to the Palais de Festival across the street, he mused, where the 69th edition of the festival is slated to kick off later tonight.

The novel venue, more than three times the size of Dior’s previous boutique at number 38, generously stretches across three levels, carrying the brand’s full range of women’s ready-to-wear, bags, shoes, accessories, high and costume jewelry, a luxurious selection of leather goods made of exotic skins and for the first time: men’s wear.

“Dior Homme has seen a strong development in all markets. In our old boutique, which I remember opening more than 20 years ago, there was simply no room for it. But the times have changed,” said Toledano, noting how important is was for the house to offer both men’s and women’s wear in the same place. “Husband and wife often come to shop together, and we cannot ask one or the other to run 50 meters down the road to another venue. We would lose them and besides, it’s not convenient, though stylistically we do keep the collections apart. Some brands choose to merge the two. At Dior, the man is very manly and the woman remains feminine.”

This “esprit,” as Toledano noted, is also reflected in the store’s interior: Cozy banquettes in a warm gray palette, Dior’s signature hue, juxtapose fine, silver chain curtains on the women’s floor designed by luxury’s favorite architect Peter Marino, while a more industrial and minimalist feel permeates the men’s department on the lower level, thought up by the in-house design team.

Armchairs by Russell Woodard, lamps designed by Wouter Hoste and an animated mural by Oyoram complete the interior.

Though the ceo would not reveal any figures, he projected that the boutique, which also boasts a VIP salon, would generate a healthy sales growth proportional to the surface, with a fresh product range slated to arrive every two months. “Unlike 20 years ago, when the festival and the summer months were our main seasons, Cannes today boasts steady traffic all year long, with a loyal local clientele. This is not your typical airport shopper, mind you, who fetches a wallet here and a pair of sunglasses there. The Cannes customer comes for the ready-to-wear, our best-performing category here, and demands novelty on a regular basis,” Toledano said.

The new flagship is part of a bigger retail expansion at Dior. The brand has recently set up similar venues in Beijing and Miami’s Design District. A flashy new London unit is to follow on New Bond Street at the end of May to coincide with the maison’s cruise collection show scheduled to take place in Blenheim Palace, known to be the Duke of Marlborough’s principal residence. It will be a return to the roots of sorts. Christian Dior himself staged a salon show here in the Fifties. There will also be an Atlanta opening in July and Chicago is set for 2017. Japan will also get a new flagship in 2017.

“We do not open a lot, but in important places,” Toledano said.

A separate unit dedicated to jewelry is slated to open doors in September on Paris’ Avenue Montaigne, across the street from the brand’s historic boutique at number 30.