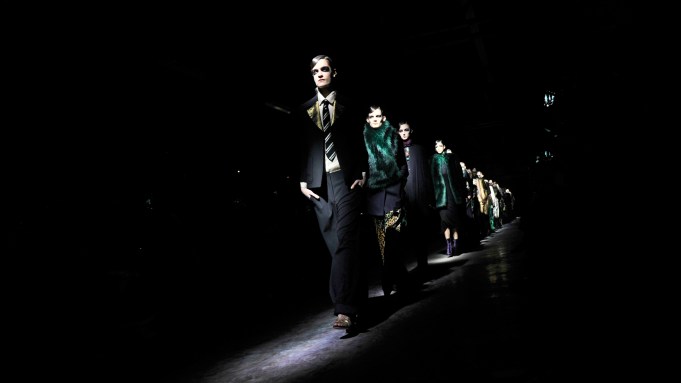 What a year! This issue is WWD’s annual distillation and evaluation of the year’s news. Typically, we compile candidates for Newsmaker and the Top Ten stories, winnowing submissions down to the final edit, often the result of intense debate.

This year in fashion — and out — was dominated by the presidential election that soared to an unprecedented level of ugly, creating rare unanimity for news supremacy. No matter how any U.S. news organization frames its year-end assessment, it will be driven in some way by the election drama that led to the stunning current employment status of President-elect Trump. That reality blindsided the entire fashion community, leaving its deep and vocal pro-Hillary contingent devastated. Here at WWD, we’ve focused not on the industry reaction per se, but on the greater cultural phenomena that created the upcoming Trump presidency, represented by The Angry American.

Fair enough. No fashion theme could compete with the cataclysmic upending of the traditional American political structure, and the parallel movements across the West in Britain, Italy and France. That explains our Newsmaker of the Year. As for our Top Ten stories, most are more acutely industry-centric, beginning with Number One, instant fashion. Could it have generated more attention, discussion, hype, frenzy? (Next year, our Top Ten might include the westward migration it spawned. Tommy Hilfiger and Rebecca Minkoff have confirmed plans to show in L.A. before NYFW; surely more will follow. As for Tom Ford, whose “Nocturnal Animals” just received three Golden Globe nominations, he will again show in L.A. to facilitate participation in the Oscars.) Also in our lineup: Kanye’s meltdown-turned-medical issue; designer and major executive changes; the escalating competition among athletic brands; the increasing clout of influencers, and so on.

Typically, we strive for at least one pure fashion item to make the Top Ten. (Pure in the sense of being linked intrinsically to the clothes. Last year, we included the changing status of designers, “Deities No Longer;” the Gucci-led role of fashion in the acceptance of gender fluidity, and Givenchy’s spring masterpiece shown on Sept. 11 downtown.

No such candidates this time around. Nor focus on a look, a mood or the influence of a silhouette, although Demna Gvasalia’s bold debut statement at Balenciaga did get fleeting consideration.

Sadly, a great deal. The consumer can see it live-streamed (or in some cases, in person) today, buy it today, wear it tomorrow — praise the Lord and type in the AmEx security code. But what is “it?” How much time was spent during the shows and thereafter discussing which creative choices mattered in fashion this year? What resonated, what stirred emotions? Where is the attention to fashion itself — not only its major themes, but also its matters of silhouette, color, fabric, intricacies of cut and construction? At best, these seem to be afterthoughts. The satellite issues that should revolve around the core have exploded into supremacy; fashion is no longer at the center of its own universe.

Among the myriad reasons for this, one seems obvious: too much merch of too little creative significance. Purveyors of such can celebrate their own procedural innovation if not that of their fashion. Yet given that inarguable fact, one would think that the great moments would shine all the more vibrantly amidst the mundane. Instead, the reverse happens. What’s the scientific conundrum about the definition of sound — if a tree falls in a forest…? In fashion, if something glorious happens on the runway and we don’t take the time to breathe it in, think about it, contextualize it — most importantly, to revel in it — did it really happen? If showgoers are preoccupied with personal brand-building Instagram posts during shows, and brands and retailers, with speed-to-market competitions thereafter, how much energy is channeled into experiencing the runway moment? Do enough people still care deeply enough about what happens on the runway?

The facts suggest no, a shame on multiple levels. The fashion industry should start paying attention to fashion again. Though endless lip service is given to the truism that product comes first, the hyper focus on non-sartorial issues — the calendar, speed to market, technological progress — has developed at the expense of celebrating fashion. Even executives at the highest levels of luxury often seem more impressed with celebrity retweets than when their designer showed a dress that took your breath away (if you were paying attention). Meanwhile, how’s business?

True, the majority of runway fare in unremarkable. But the year offered moments of breathlessness and sometimes, provocation. I wish I’d been in Cuba for Karl Lagerfeld’s Chanel extravaganza. Viewing pictures of the house grandeur against those of the real Havana — the epicenter of a still-developing economy — captured the reach of fashion today, and the sometimes uncomfortable incongruity inherent therein.

What were the special moments — the ones that stirred? Certainly Lagerfeld’s Fendi masterpiece at the Trevi Fountain during which the models walked on water while exposing his seldom-revealed passionately romantic side. Gvasalia’s collection, with its exaggerated shoulders and audaciously presented message of real-world practicality, came closest to charting a new course. While I didn’t love it, its bravado proved admirable. Sarah Burton’s ode to the Shetland Islands for Alexander McQueen — a dream. Miuccia Prada designed her nuanced fall show as a study of women as imperfect individuals. “Maybe it’s useful to look back to the different characteristic moments, difficulties, love, no love, pain, happiness, different kinds of women: sexy, boring, traveler,” she said. “So this was the main concept.” That broad vision imposed conceptual structure on a beautifully diverse collection. Yet Prada is both fashion philosopher and savvy practitioner. The show derived very directly from her men’s collection six weeks previously, sending the message that maybe fashion should slow down and appreciate the best it has to offer.

Some shows pulsed with powerful emotion. Top of the list, two gems, both fall collections: Marc Jacobs’ lyrical extravaganza of gentle fashion noir and Dries Van Noten’s richly drawn treatise on blurred gender lines. With its enormous, intensely decorated silhouettes shown on a stark white set, to the sound of single chimed notes by Japanese musician Keiji Haino, the former designer mesmerized with romantic theatricality. The latter, inspired by Marchesa Casati and a favorite (though not exclusive) paramour, Gabriele d’Annunzio, dripped with chic decadence while referencing a time when sartorial expressions of non-conformist sensuality were fraught with danger. In both cases, the clothes were extraordinary and the defining thought processes, worthy of consideration, attention, discussion. Yet which of the above stellar performances garnered a fraction of the attention lavished on Wear-Now?

One might argue that at end of the day, these are just clothes at retail for a season, while the industry is trying to figure out best practices in a rapidly changing environment. But sometimes “just clothes” cross over to larger cultural motifs. For those who are into it, serious conversation on the deeper meanings of clothes can prove both compelling and illuminating.

Yet to harp only on the deep side of fashion talk ignores what used to be an essential element — the joy it brings. Institutional fashion today is so wrapped up in the ancillary-turned-primary issues — instant fashion vs. traditional timing; social media reach, and on and on — that it pays scant attention to marketing the feel-good factor that drives people to buy. If you love something, it’s exciting to talk about it.

Two of the year’s most memorable moments for me involved designers discussing their work. At the Fairchild Honors in October, Ralph Lauren received the first John B. Fairchild Award, named after our late chairman and editorial director. Lauren spoke eloquently and emotionally about his craft. “I love the passion, I love the work,” he said, advising young people: “Bring your heart, bring your passion and love what you’re doing.”

In July, I was invited last-minute to preview the Maison Margiela Artisanal collection with John Galliano. I arrived expecting a typical backstage mini-session — five minutes, quick perusal of boards and racks, sound byte, good-bye. Instead, I was welcomed for tea and conversation. To hear Galliano articulate his thought process — which for this collection crossed disparate reference points from skateboarders to 18th-century satirical illustrator James Gillray — was fascinating, but no more so than his explanation of the technical challenges involved in inserting a pair of giant intarsia cherubs into a swath of chiffon, or why a Victorian-inspired jacket would not have worked were a particular seam a quarter-inch to the left or right. His passion for perfection inspired. It deserves to be shared.

That conversation was in Paris at the Hotel des Invalides with John Galliano. A couple of weeks ago, a colleague (a gifted journalist and fashion critic unnamed here due to her discomfort with being mentioned in print) came into my office wearing the best jeans in the world — a pair of Junya Watanabe’s intensely patchworked jeans, which I’ve never seen on anyone. They’re amazing. This led to a discussion as intriguing to me as the Galliano conversation. With billions of Levi’s knockoffs out there, how can one rendering emerge as special, designed rather than merely marketed? The denim is cut up and reconstructed, its various squares and rectangles interrupted by others of different materials — tweeds, sequins, a small patch of red tartan on the rear end. We talked about the fabric choices, why this piece was placed here and not there, really getting into it. It was professionally interesting. More than that, for two women who love fashion to dissect these jeans piece by piece was, what’s the word? Fun.

Fashion doesn’t have to walk on water à la Fendi. It can, and when it does — hallelujah! It can also present in the most ubiquitous of items, a pair of jeans. We as an industry have to recognize it and celebrate it when we see it. We can’t afford to get so distracted by process — no matter how progressive, technologically forward and essential it seems — that when a rare, genuine fashion tree falls exquisitely in the forest, we’re deaf to its compelling creative resonance.

Here’s to some real fashion cracking next year’s Top Ten.