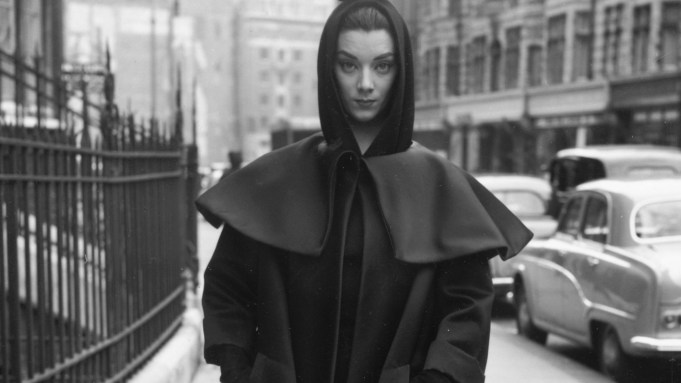 1919: Balenciaga opens a boutique in San Sebastián, Spain, which becomes successful and spawns branches in Madrid and Barcelona.

August, 1937: The Spanish Civil War forces him to close his stores, so he moves to Paris and opens his house of Balenciaga on the Avenue George V.

1951: It isn’t until after World War II that Balenciaga becomes a great fashion innovator. In 1951, he transforms the silhouette completely, adding broader shoulders and getting rid of the waist. Among his clients are Bunny Mellon, Babe Paley, Millicent Rogers, Pauline de Rothschild, Marella Agnelli, Gloria Guinness and Mona von Bismarck. John F. Kennedy and Jackie get into fights during his Presidency about the fact that she’s buying Balenciaga, which he thinks the American public will find too extravagant. Her father-in-law, Joseph P. Kennedy, pays her bills.

Oscar de la Renta, Pierre Cardin and Emanuel Ungaro work in his atelier, while Hubert de Givenchy, who opened his own house in 1952, later becomes a protégé.

1957: The chemise, the cocoon coat, the balloon skirt, the baby doll dress, the sack dress.

1959: The Empire line, with high-waisted dresses and kimono coats.

1960: Balenciaga makes the wedding dress for Fabiola de Mora y Aragón when she marries King Baudouin I of Belgium.

May 1968: Cristóbal Balenciaga suddenly closes his maison in Paris. Diana Vreeland said that, when von Bismarck learned that Balenciaga had closed, she didn’t leave her bedroom in her villa in Capri for three days.

March 25, 1972: Cristóbal Balenciaga’s funeral. Everyone in the fashion and social world attends. Diana Vreeland said, “Balenciaga gave the world fashion. He was the beginning of everything, everything that is news — forever. Mention anything, raincoats, black stockings, the most luxurious fashions in the world — great fabrics…the color, the color, good God, the color. I used to have my secretary sit next to me at the collections and take down his marvelous combinations of color. He gave the world fashion. He gave the femmes du monde clothes.”Vreeland also said that, when von Bismarck learned of Balenciaga’s death, she took to her bed in her villa in Capri for three days.

According to Norman Norell, “The three greatest dressmakers of the 20th century were Vionnet, Chanel and Balenciaga, not necessarily in that order. We have nobody to replace him,” Oscar de la Renta said. “He is the only designer I can think of who never did anything in bad taste.” Halston said, “He was the hero to every serious designer. He took fashion to an art plane it had never reached before and I think that it will never reach again.”

1997 to November 2012: Nicolas Ghesquière serves as head of the house of Balenciaga.

June 2011: The Museo Balenciaga is founded and opened in the designer’s hometown of Getaria, Spain, by Queen Sophia of Spain and Hubert de Givenchy, honorary president of the Balenciaga foundation.

December 2012 to July 2015: Alexander Wang serves as creative director of the house.