Italian actress, performer and writer Silvia Calderoni is the protagonist of the mini-series co-directed by Gus Van Sant and Alessandro Michele.

By Alessandra Turra and Martino Carrera and Sandra Salibian on November 17, 2020

EPISODE 1 – AT HOME: A morning routine, but not so traditional, in sync with Alessandro Michele‘s take on life. The first episode of “Ouverture of Something That Never Ended” — a miniseries codirected by the designer and Gus Van Sant to present the new Gucci collection — introduced the main character Silvia Calderoni, an Italian actress, writer and performer, as she indulged in her morning rituals. While the average young woman could be expected to brush her teeth in an old T-shirt or in her pajamas, Calderoni does so wearing a black tulle jumpsuit — also favored over Lululemon leggings for her asanas in front of the TV as watches Spanish philosopher Paul B. Preciado, an expert of gender studies, hold a lecture — and even address her from the screen.

In the meantime, an actual band performs music by Jamison Baken in the living room. Calderoni seems more intrigued by Gucci’s past show invitations she finds in her mailbox — as she collects them wearing a dress embellished with pearls and a pink sequined cap. She looks out from her balcony to check out passersby when her doorbell rings. It’s a friend who starts riding a bicycle inside her apartment. He never speaks, but every time he completes a full round of the flat he gives her a delicate kiss on the cheek. Billie Eilish’s new song “Therefore I Am” fills the silence.

Combining the surreal and the poetic, the first episode was peppered with references to Michele’s past collections and projects, spanning from the suit with a black bow at the neck worn by Preciado, reprising a look from his first solo men’s collection for Gucci, to the jacquard rugby polo shirt sported by Calderoni’s mysterious friend embellished with the crest of Derbyshire’s Chatsworth House, where Gucci set its cruise 2017 advertising campaign with Vanessa Redgrave.

EPISODE 2 – AT THE CAFÉ: Even a morning stroll to the local coffee shop can turn into a surreal experience, especially if the location is a retro-tinged bar replete with Formica furniture and peopled with quirky characters. Wearing a boxy T-shirt emblazoned with the “L’Aveugle Par Amour” moniker Gucci has featured on its runway in previous seasons and a skirt full of logos, actress Silvia Calderoni joins a group of women sipping their coffee outdoors, all clad in the red floral dress she had let drop from her balcony in the first episode of the miniseries. 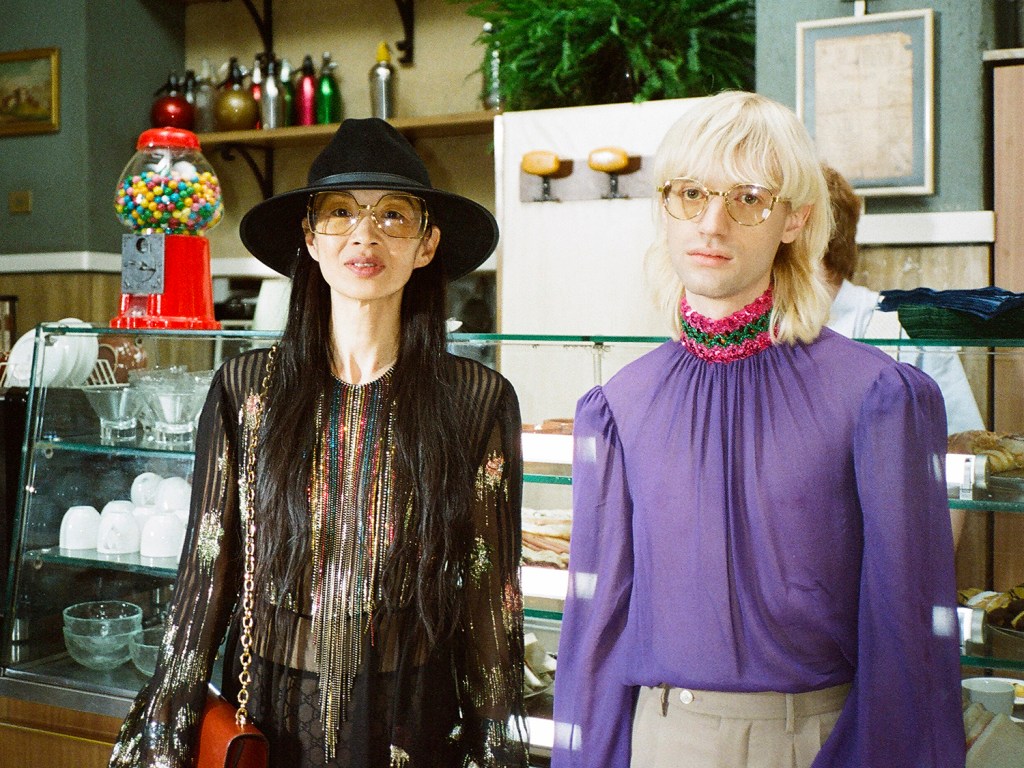 She engages in a conversation with a friend, interpreted by British singer and poet Arlo Parks, as other people, including a naked couple flirting, are busy talking about the power of nature and its beauty. The entire episode is dubbed in Italian – a wink to its movie industry’s renowned dubbing skills.

As Propaganda’s hit “P-Machinery” plays in the background, booming from a Fifties jukebox, Arlo – who dons a plain hoodie and printed tunic accessorized with a crossbody Jackie 1961 handbag – leaves to join friends on a car ride past Roman landmarks. Left alone, Calderoni chats with a young man and then heads to the bathroom, decked out in elaborate boiserie.

When she exits, Calderoni emerges on to a theater stage, facing an empty orchestra.

EPISODE 3 – AT THE POST OFFICE: Harry Styles wears a boxy pink T-shirt declaring “Eschatology” – a doctrine that explores the ultimate destiny of humans and universe. In a quiet garden, he engages in a phone conversation with famed Italian art critic Achille Bonito Oliva, one of the eccentric personalities queuing at the post office where Calderoni, the central character, is writing a postcard. She eavesdrops on the surreal conversation. 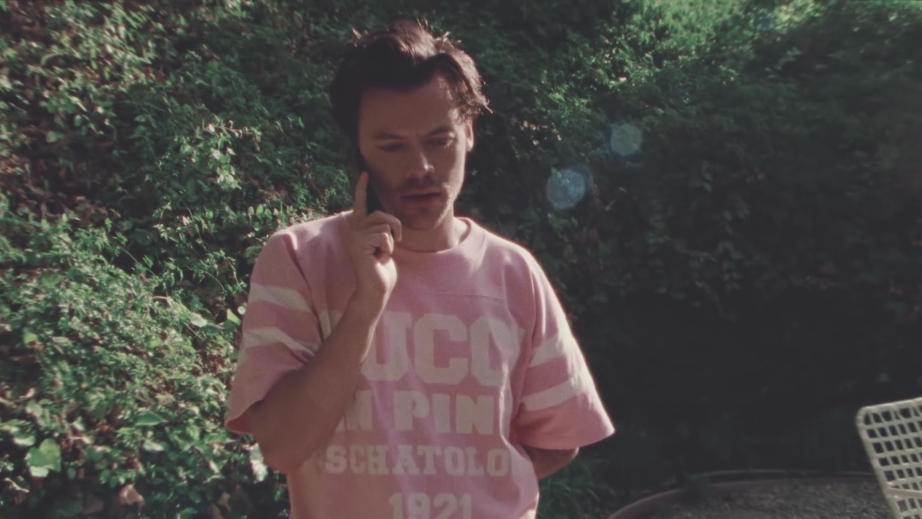 Elsewhere at the buzzing post office, characters parade an array of Gucci looks, with close-ups on their Gucci Basket sneakers with fluorescent details, signature loafers, sandals and slingback pumps worn with socks.

A Fellini-esque vibe runs through the tableau vivant, a reference reinforced by a Nino Rota track from the director’s 1963 movie “8½.”

In the closing scene, Calderoni – here seen wearing a men’s look pairing a short sleeved checkered shirt with denim shorts – concludes her errand by getting a stamp with a coded message that has linked all episodes so far.

EPISODE 4 – THE THEATER: Silvia is in a theater. Dressed in an Eighties’ sequined outfit, she looks very nervous. Her friend, interpreted by actor and playwright Jeremy O. Harris helps her to stretch and release her pent-up tension. In the meantime, choreographer Sasha Waltz and her dancers, all wearing lightweight outfits, featuring lace tops, silk dresses, plissé skirts and fluid sartorial pants, are on the stage rehearsing. Their movements are so fluid, their bodies seem fused together, as well as their souls. It’s Silvia’s turn, she takes the stage for her audition. Her anxiety seems to disappear on the notes of Maurice Ravel’s Boléro, which brings joy and hope to the theater.

EPISODE 5 – THE NEIGHBOURS: After the first episodes focused on Calderoni’s daily routine, the fifth installment opens on a variety of characters the actress watches from her window as they take care of their house chores. While artist Ariana Papademetropoulos, who has fronted the Gucci Memoire d’Une Odeur fragrance ad campaign, is seen watering plants on her balcony clad in a silk floral dress, an older couple reads a poem seated on a couch. As artist and designer Darius Khonsary is seen hanging wigs to dry on a clothesline, a long-haired young man is shaving his beard.

The camera indulges on the latter character as he gets dressed in a silk shirt embellished with the double GG motif from the collection but when he looks at himself in the mirror he is seen wearing the red silk blouse with a bow that opened Michele’s 2015 men’s runway show for the house – a wink to the designer’s new approach for Gucci that’s less about seasonal trends and more about the evolution of his signature language.

There’s a voyeuristic vibe running through the episode, which seems inspired by Alfred Hitchcock’s 1954 movie “Rear Window,” except for the thriller plot.

A young girl takes a bath, dressed head to toe in Gucci’s new gear. Switching on the TV she enjoys a music video of Billie Eilish’s new hit song “Therefore I Am.” Instead of the actual music video, what she sees is a rendition Eilish has created in collaboration with Gucci for the mini-series. Directed by Harmony Korine, a Gucci collaborator and also an actor featured in some of Van Sant’s movies, it shows the singer dancing in the courtyard flanked by dog-like robots by Boston Dynamics.

EPISODE 6 – AT THE VINTAGE SHOP: Silvia visits a Gucci vintage shop, filled with pieces from the brand’s past collections designed by Alessandro Michele. When she sees a mannequin wearing a coat from the fall 2015 lineup featuring a graphic pattern, a tear trickles down her face. Inside the shop, which is run by an actual vintage shop owner, Giulia Salvatore, she tries on two pairs of Gucci logoed sunglasses. In the meantime, singer and songwriter Florence Welch enters the stores in a degrade plissé dress and a wide brim hat. She walks around the shop writing quotes on pieces of paper that she hides inside clothes and bags. Welch also puts one that  reads “Honey is in the streets” in the back pocket of Silvia’s denim shorts, worn with the new collection’s “Eschatology 21” T-shirt featuring Michele’s favorite number, 25.

EPISODE 7 – A NIGHTLY WALK: The empty streets of Rome at night lead Calderoni at the doorstep of Chinese singer and actor Lu Han. While she waits for an answer from the intercom, a series of characters bedecked in Gucci attires leave the building, including director Gus Van Sant, who makes a cameo dressed in a windowpane suit as he walks out a dog.

Meanwhile, Lu Han stops ironing a red pleated dress from Alessandro Michele’s first women’s collection at Gucci and engages in a conversation with Calderoni, here sporting a men’s three-piece suit, pink silk shirt and brown tie. The actress is later picked up by a friend on a Vespa scooter and indulges in a night tour of the Eternal City, with the audience partaking the journey through beautiful takes of landmark locations.

As the tour ends and Calderoni’s day is nearly over, she finds a flyer with the coded message that acted as the fil rouge through the seven installments. Like an epiphany, the protagonist – and public – find out it cites lyrics from the Tuxedomoon song “In a manner of speaking.”

“In a manner of speaking, I just want to say that I could never forget the way you told me everything by saying nothing,” reads the message, while the camera zooms out and shows Calderoni on the theater stage.

Was any of it real or all a play, then? Lights off.