Marking 20 years in the game, An Vandevorst and Filip Arickx presented 40 looks built around house codes, and integrating archive pieces still tacked with their storage tags. 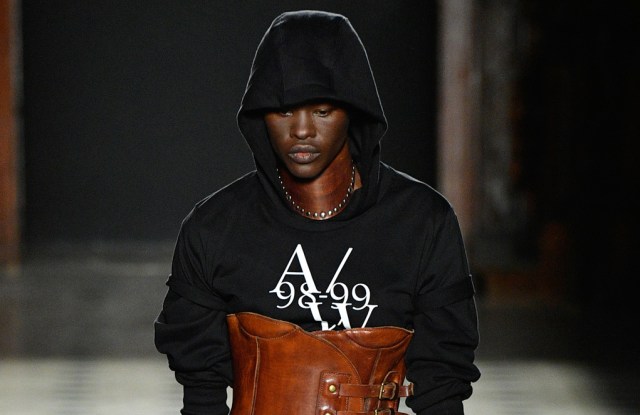 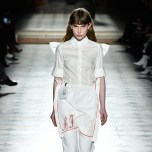 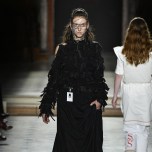 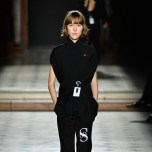 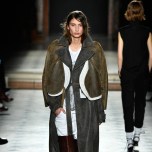 PARIS — Celebrating 20 years, An Vandevorst and Filip Arickx on the final day of Paris Couture Week presented a showcase of 40 looks built around house codes, and integrating archive pieces still tacked with their storage tags. Case in point the opening cognac leather corset fashioned from a horse saddle that was from their very first collection, here strapped over a black hoodie.

The following exit — a shirtdress masquerading as a white cotton pillowcase, with a padded section strapped to the back and a square skirt embroidered with the designers’ initials, recalled their second collection, for spring 1999, where models stretched out on midcentury hospital beds before hitting the catwalk. Their military and lingerie obsessions were also intact, from a silhouette based on layers of stockings in nude tones, paired with a flipped, deconstructed jacket, to an army parachute skirt with a dramatic train.

A capsule collection of 10 T-shirts designed in collaboration with stylist B. Åkerlund, based around the house logo, the red cross, were folded in.

Other flashbacks included rabbit fur used on skirts, waistcoats and boots, a cool craft paper trench, and a corset based on a shrunken jacket. It all felt darkly romantic and familiarly creepy, with touches like Hannibal Lecter-style masks.

Presented in protestant chapel L’Oratoire du Louvre, the show served as a memory jogger for the design duo’s inventiveness and a branding exercise as they embark on their next chapter, with a strategy hooked on clothing capsules inspired by the couture-week presentations and developing the footwear, as a key pillar of the business.