The store, which transformed Dover Street, has landed on Haymarket.

By Samantha Conti and Lorelei Marfil on March 21, 2016
View Slideshow 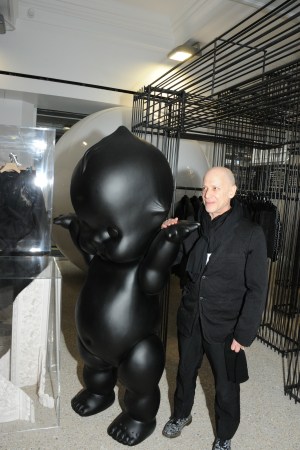 LONDON — “Legs in the air!” proclaimed Stephen Jones with the air of a ringmaster as he showed off his latest installation for the all-new Dover Street Market: a jumbled tower of upside-down chairs with one-of-a-kind hats dangling from their narrow legs.

“It’s a special collection I do for Dover Street Market, and there’s only ever one of each — and they’re ready to go,” said the designer, who was wearing a gray top hat and suit to match the installation on Friday, the day before the store was set to open to the public.

The London milliner wasn’t the only one in a jubilant mood: There was a funfair atmosphere at the new store which, at 31,384 square feet, is triple the size of the former unit on Dover Street. Located in the old Burberry headquarters on Haymarket, a few steps from Piccadilly Circus, the new Dover Street Market spans five floors. Rei Kawakubo masterminded the overall space and asked the brands and designers to create their own worlds within it.

The store is Kawakubo’s biggest yet and she said her aim was “to create a kind of market where various creators from various fields gather together and encounter each other in an ongoing atmosphere of beautiful chaos…the mixing up and coming together of different kindred souls who all share a strong personal vision.”

Adrian Joffe, Kawakubo’s husband and chief executive officer of Comme des Garçons and Dover Street Market, said his wife initially feared the sheer size of the space would mean that Dover Street Market would inevitably look like a department store.

“I told her ‘No, we’ll do it our way.’ I think it’s the proudest shop she’s done, and there’s a balance between the big luxury brands and small ones, with her interior design. Have you seen the dinosaur?” he asked, referring to one of Kawakubo’s creations, a giant black metal skeleton on the store’s second floor.

Indeed, Kawakubo’s quirky, arty fingerprints are all over the Grade-II listed building that was erected by Thomas Burberry in 1912, with its Palladian windows, original wooden circular staircase and double-height windows facing Haymarket.

“We’ve taken the building back to its shell — all the partitions and the walls — everything. The ground floor and first floor are a bit more regal and beautiful, so we’ve retained those features and added other things to them,” said Dickon Bowden, Dover Street Market’s vice president.

There are no fake ceilings — all are original height — and on the top floor, natural light streams through the windows on the pitched roof. There is no down lighting. The sound artist Calx Vive, meanwhile, has created different audio configurations on each of the five floors to marry with Kawakubo’s credo of “beautiful chaos.”

Gigantic fiberglass spheres the size of small planets fill the ground floor windows, while tubular LED lights hang from the ceiling above the Rick Owens space on the first floor. The chandelier installation is called “Frozen Waterfalls.” Kawakubo has also dreamed up the puzzle-like interlocking shapes that adorn the third floor, the wooden hut on the ground floor and all of the Comme des Garçons and Junya Watanabe spaces, as well as The Perfume Tower and Pocket Shop.

In typically subversive fashion, Kawakubo and her team closed the traditional entrance on Haymarket and created a stealth one on Orange Street, which runs along the side of the building.

Joffe said the store is a mix of concessions, including Dior, Alaïa and Céline; wholesale for small or emerging brands such as Molly Goddard, and a half-concession, half-wholesale model for names such as Simone Rocha and The Row. He said he expects first-year revenue to hit 28 million pounds, or $40 million, compared with 18 million to 19 million pounds, or $26 million to $27 million, that the Dover Street unit was generating.

“They hand over the space to you — no one else lets you do that, and that is why Dover Street Market remains the best store in the world,” said Jonathan Anderson, who based his space around the playground in his hometown of Magherafelt, Northern Ireland.

Anderson’s space features a climbing frame, slide and jungle gym-like structures in primary colors, which serve as displays for his men’s and women’s collections. The leather logo bags cascading down the pink slide are exclusives to the store. “The whole store is playful, fun — and doesn’t take itself too seriously,” the designer said.

Frances von Hofmannsthal, whose father is the photographer Lord Snowdon, is debuting her first collection of hand-dyed, London-made smock coats and bags, as well as the new magazine called Luncheon. Her space, on the top floor, is meant to mimic her father’s photography studio, while the fabric in the collection resembles the backdrops he regularly used for his portraits.

On the ground floor, Burberry has assembled a collection of 20 original weatherproof coats in a space that features mirrored puddles and paper clouds. Kawakubo, the designer behind Comme des Garçons, and the retail chain that includes DSM Ginza, DSM New York and the franchise I.T Beijing Market, will be reworking a selection of the Burberry coats and the designs will be exclusive to the store later this year.

Nearby, Rocha has created an area that echoes her stand-alone store on Mount Street. She’s also whipped up a capsule collection of gold cloqué designs — and gold brogues — that are exclusive to Dover Street Market.

The space is her largest outside Mount Street and Rocha said its design is meant to be “in conversation with” the Haymarket building’s original features. She has brought in Plexiglas fixtures and has put on display broken chunks of handmade rose cornicing, which also features in her store.

Paul Smith has created a replica of his first shop in Nottingham, England, a postage stamp of a space that carries a mix of magazines and books, skulls from Mexico, men’s jackets, cycling caps, toys and scarves.

“The idea is to show that coming from a very modest beginning — a small size — you can progress to do what we’re doing, which is selling in 73 countries around the world,” Smith said. “So in terms of the mix it was very easy to do. This is just basically like my office in London. It’s really just taking a few things from my room, really, and just having them here.”

Goddard, one of the young London designers that Dover Street Market has supported from the start of her career, has done three exclusives for the store — a tartan skirt and two tartan dresses with smocking and short sleeves. She has a space across from Rose Bakery, which her parents helped her to decorate. It’s far bigger than the one she had on Dover Street and it features a long banquette covered in melon-toned velvet, a shaggy patchwork carpet, and white glazed sculptures made by her father.

“I wanted it to feel quite homey and comfortable, and I can even change the layout of the patchwork carpet when I want,” said the designer, who’s known for her voluminous skirts, smocking and collections based on vintage children’s clothing.

Rose Bakery even has a new, expanded space on the top floor with a bigger menu and longer opening hours.

Joffe said he and Kawakubo never expected to leave Dover Street, where they landed 12 years ago, transforming the sleepy thoroughfare into a retail destination, with stores including Victoria Beckham, Jimmy Choo Men’s and James Perse. They only decided to move because the Dover Street landlord tripled the rent.

Once again, the couple chose to plant their flag in an unexpected neighborhood, a rundown touristy area where the neighbors include Cineworld, Planet Hollywood and PizzaExpress. Yet, Haymarket and the surrounding streets are changing fast thanks in large part to an overhaul spearheaded by the Crown Estate property company, the profits of which go to the British treasury for the benefit of the nation’s finances.

St. James’ Market, which runs parallel to Haymarket, is one part of the ongoing refurbishment scheme by the Crown Estate to transform the once down-at-heel area around St. James’ with upscale restaurants, shops and offices.

The Crown Estate, along with Oxford Properties, is investing 400 million pounds, or $575 million, in St. James’ Market alone as part of a ten-year rejuvenation strategy in the area.

Anthea Harries, portfolio manager, St. James’, Crown Estate, said Dover Street Market’s arrival will change the dynamics of Haymarket. “There is very little in terms of fashion or retail there, and people see it as a true destination store. It was visionary of them to choose that location — a blank canvas — and they were very bold to move the main entrance,” she said.

Dover Street Market’s Bowden said he’s not worried at all about the neighborhood. “The mornings are really lovely, quiet and tranquil. During the day there’s a lot of people walking to the National Portrait Gallery, and in the evening there’s the whole theater crowd — so it flips again,” he said.

Green, an emerging London men’s wear designer whose basement space features a giant, sharklike sculpture made out of foam, and rails made from old building site materials, said he doesn’t frequent Haymarket much. “But I think it’s going to change. Dover Street Market made Dover Street what it is now. So I think the following and the power they have in the industry are definitely going to make a difference. This is so spread out, and they have space to do a lot more.”

Asked about his former office, Christopher Bailey, Burberry’s ceo and chief creative officer, said it was strange to be back in the building.

“They brought a whole new life and energy to this very beautiful, historic building. It does have a lot of memories for me. I spent many, many hours here so it feels slightly odd to be back in our old home that is now the new beautiful home of Dover Street Market,” Bailey said.