A Legacy in Men’s Wear at Lanvin

For decades, suits — rather than frills, drapes or dresses — set the tone at Lanvin. 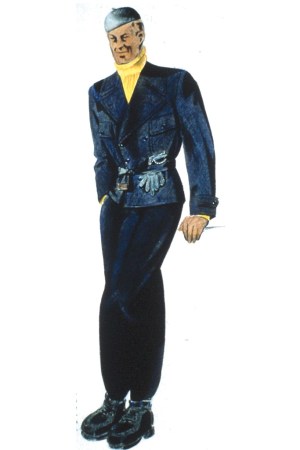 For decades, suits — rather than frills, drapes or dresses — set the tone at Lanvin.

Although the house’s meticulously preserved archives reveal surprisingly little about its men’s wear department before the arrival of current artistic director Lucas Ossendrijver in 2005, it was the men’s wear division with its strong roots in bespoke tailoring that kept the house afloat during its fallow years.

Just before the arrival of Alber Elbaz in 2001, men’s fashion accounted for 90 percent of the company’s annual turnover, equally split between its bespoke business and ready-to-wear, which launched in 1972.

Various designers spearheaded the commercial line, including Patrick Lavoix and Dominique Morlotti, both former Dior men. All the while the bespoke atelier, still to be found where Jeanne Lanvin set it up in 1926, catered quietly, but efficiently, to an illustrious and particularly loyal clientele, preserving the house’s original savoir-faire, which remains a driving force behind the brand’s rtw collections.

“It’s very much in the spirit of the house to serve the fathers and the sons,” said Patrick Nogueira, Lanvin’s current master tailor. “To me, this is the only bespoke house left that is truly French and very Parisian, discernible by its discretion and minimalist approach. It’s tasteful, but you are not supposed to notice.”

In fact, it’s so discreet, Lanvin doesn’t even advertise it. And yet the list of those who succumbed to the style is long: from artists, poets and actors to entrepreneurs and royals, including Salvador Dalí, Jean Cocteau, Jean Reno, Jean Dujardin and the Aga Khan.

Moreover, the atelier has figured among those couture houses that have provided artfully embroidered uniforms to new members of the Académie Française, France’s intellectual elite, a tradition Lanvin started in 1901 with Edmond Rostand, a close friend of hers and author of the literary classic “Cyrano de Bergerac.”

By the end of the Twenties, men’s wear had become Lanvin’s utmost concern. The assiduous designer already had women’s and children’s lines, haute couture and bridalwear, separate divisions for fur, lingerie, perfume and beauty in her portfolio. She had also established a sportswear line in 1923, inspired by hunting and horseback-riding, and joined forces with architect Armand-Albert Rateau to create a home decoration line. All that was missing was an independent men’s wear division.

“From the beginning, Jeanne Lanvin very much wanted to create a lifestyle brand, so when the home decoration line was discontinued in 1925 and the building housing it at 15 Rue du Faubourg Saint-Honoré was freed up, she jumped at the opportunity, becoming the only designer in Europe who was able to dress every member of the family for any given occasion at any given time of day,” said Laure Harivel, the house’s archivist.

Lanvin called upon three of France’s most celebrated master tailors — Deschamp, Banino and His — to set up an innovative made-to-measure atelier. Their mission: melding elegance with comfort by borrowing from sportswear. Oversize shapes and lightweight materials became the house’s signature, and it adopted a large palette of colors, including various shades of blue, that remain a trademark.

In addition, Lanvin’s nephew Maurice, the atelier’s manager, created a highly popular line of ties in unusually quirky prints and colors that came with matching socks.

The workshop also offered bespoke shirts done by master shirtmaker Bienvenu and excelled in loungewear, including pajamas and bathrobes, which, according to Nogueira, are still a viable category.

“It was all very modern for that time and not at all what other houses were proposing,” said Harivel, pointing to a double-breasted marble green suit with large peak lapels and soft shoulders that Lanvin presented at an exhibition for tailors in Barcelona in 1929. It could effortlessly blend in on today’s runways.

“I’m very happy and proud that we still have that savoir-faire and the atelier. What we do there, for me, is the heart of the company. Since there are no archives, that is what I go back to,” said Ossendrijver.

He noted he finds “the extreme attention that is paid to the construction of a garment very inspiring. It gives me ideas and it gives me energy to try and introduce new elements.”

Both Ossendrijver and Nogueira expressed the wish to bring bespoke and rtw, whose pattern-cutter is also a trained tailor, closer together.

“We are seeing an increasingly younger clientele asking for more fashion-forward pieces that resemble what they see in the shop windows downstairs,” said Nogueira, an exquisitely cut pair of blue jeans laying on the master tailor’s table.