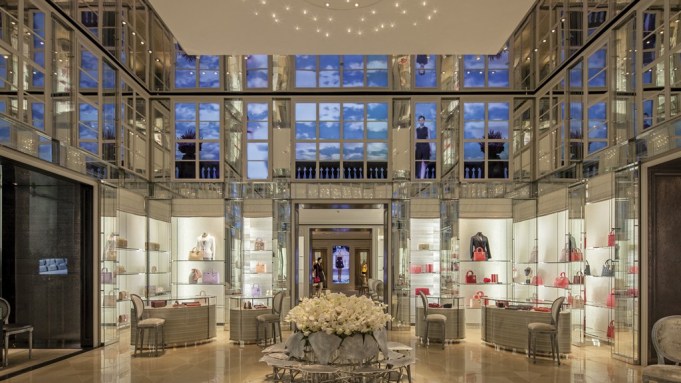 The house closed its freestanding boutique on Haddock Lobo Street, once the hottest shopping spot in the city, and reopened a unit twice the size in Shopping Cidade Jardim, the mall that houses the only Louis Vuitton global store in Latin America.

Crossing the Pinheiros river from the western part of São Paulo to the southern part of the city, the 5,380-square-foot boutique opens with Raf Simons’ cruise and spring collections and, for the first time, timepieces, like the Dior VIII.

“We wanted to expand and to be in another neighborhood,” said Sidney Toledano, Dior’s chief executive officer, noting the team has studied the move for the past three years but has been busy with Dior’s makeover on the other side of the globe.

At the beginning of the month, the ceo was in Sydney opening the brand’s first flagship in Australia.

“I love the concept of Cidade Jardim, with the open sky and très raffiné [very refined], not a mass market place,” he said. “A brand of high luxury like Dior must be located where the client can leave the car with the valet parking, go to a nice restaurant or drink a cafezinho.”

Toledano, who lived not far from the boutique on Haddock Lobo some 35 years ago, did not reveal plans for reopening the now-closed store there. Other high-end brands like Cartier have left Haddock Lobo as well for the privacy of malls.

One option would be for Dior to be part of the future Cidade Jardim Shops, a 70-store mall designed by local architect Marcio Kogan. The new address is almost directly across from the old Dior and is also owned by JHSF, a group that has been working closely with LVMH.

Rio de Janeiro is likely in Toledano’s sights, although the executive was not specific about any plans there.

“We don’t want quantity or enormous-sized boutiques,” said Toledano. “We are more about quality and intimacy.”

The Dior at Cidade Jardim follows the new direction set by architect Peter Marino for Avenue Montaigne in Paris. It houses art pieces by Yoram Mevorach Oyoram and Philippe Bradshaw and is designed like an apartment, divided into four living rooms.

At a preopening event for private clients on Thursday, associates trained by the Paris staff helped put together outfits for the opening later in the evening of the “Lady Dior As Seen By” exhibition, incorporating the work of Brazilian artists Tunga, Laerte Ramos and Brígida Baltar.

Amid a flurry of vendeuses, clients sat on gray Louis XVI chairs sampling shoes, while in the fitting rooms others tried on jacket-dresses and asymmetric tops with shorts. The short silhouettes and acid colors made an impression on the hangers and revealed the new look of Dior.

“I disapprove of the word ‘rejuvenating,’ for Dior is not going through a lift,” said Toledano. “It’s more like a woman falling in love again and her inner beauty surfacing.”

The ceo cited Simons’ capacity to understand what goes through the head of the modern woman — and the ability to deliver that in the form of well-cut clothing.

The last time Dior caused such a stir here was in 2005, when it opened in the Villa Daslu, a building now on the verge of destruction. At the time, the house unveiled a new decor to the world, one that substituted gold for white and silver. Then-designer John Galliano created 50 cotton T-shirts with embroidered blue flowers for the opening.

“Dior’s relationship with Brazil dates back to the New Look,” Toledano pointed out. His dossier of the Brazilian connection showed the original orders of six local clients from the Corolle collection. Dior also produced an exclusive collection of swimsuits for Brazil — for the girl from Ipanema.