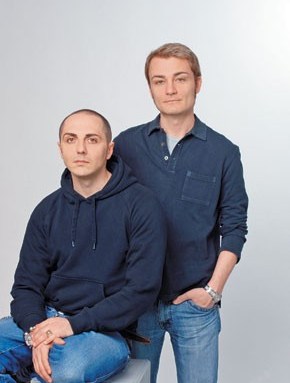 MILAN — Gianfranco Ferré SpA hopes two will be better than one.

Aquilano and Rimondi will replace Lars Nilsson, who left Ferré in February before he even completed his first collection for the house. Their initial effort will bow for spring 2009.

In a phone interview, Aquilano said he and Rimondi were “proud and happy” about their new role, describing Ferré, who died in June, as a legend. Aquilano underscored Ferré’s knowledge of fabrics, materials and structures.

While shying away from drawing comparisons with Ferré’s style, Aquilano said he and Rimondi shared a passion for fabric innovation, volumes and structures with the designer, who trained as an architect. “We hope we can be worthy of him,” said Aquilano, adding the brand has the potential to be further developed in many different areas.

“We are happy to approach another entirely Italian brand, a historical label that is tremendously interesting for the international market,” said Aquilano. “We can only learn from Ferré.”

At the same time, Aquilano said he and Rimondi see their new role as a means to “evolve [themselves] and the maison and look forward.”

The designers have quickly garnered media and commercial recognition with their 6267 line, which was launched in 2005, and have been pivotal in the relaunch of the Malo brand, owned by IT Holding Group, which also controls Ferré. The designers will no longer design Malo, which they joined in July 2006, a brand Aquilano and Rimondi care deeply for. “Although this new project is more exciting, there is some nostalgia in leaving the brand,” said Aquilano.

Tonino Perna, chairman and chief executive officer of IT Holding SpA, said he was convinced “the talent of the designers, recognized at an international level, will allow them to interpret Gianfranco Ferré’s aesthetical codes to enhance the extraordinary potential of this brand while respecting its excellence and contemporary sophistication.”

Michela Piva, ceo of Gianfranco Ferré SpA, said the designers “easily move between cool classic and a modern femininity,” and pointed to “their rigorous designs and confident sense of quality,” which Ferré also possessed.

Aquilano and Rimondi, who hail from the Apulia region and Bologna, respectively, first met in 1988 and won the Italian Vogue-sponsored contest Who’s On Next in 2005. Since then, they have developed their edgy yet salable style: architectural structures and tailored cuts, often embellished with precious details and embroideries.

Milan retailer Rosi Biffi, who has been carrying their line since it was launched, praised their move to Ferré and said the designers will “bring a huge, contemporary innovation.” Biffi said it “was a very good match” and that the designers have a thorough knowledge of the métier.

“They are so young but they already know how to do couture in a young way and luxury ready-to-wear at the same time. It’s an innate talent they have,” continued Biffi.

The two 36-year-olds live and work in the northern Italian town of Mantua, about an hour away from Milan. The 6267 name, which they say resolves language barriers, is simply a number that Rimondi was assigned as a child at summer camp.

Nilsson was hired last September following Ferré’s death but left abruptly in February. According to sources, Nilsson not only steered away from the designer’s aesthetic but didn’t bond with the house’s design teams. The fall collection was quickly put together by a team.

But Ferré was Ferré, and the screening of his original sketches as a backdrop at the show only made the comparison harsher. The team (which presumably scraped the looks together in 10 days) worked his requisite architectural shapes — sweeping collars, sculpted sleeves, billowy white blouses, chunky knits and a nod to men’s wear — but the clothes lacked the élan and forcefulness that Ferré delivered. It was clear with the finale as model Mariacarla Boscono exited in pants topped with an organza blouse from Ferré’s fall 1990 collection.

In February, Perna told WWD he was more in favor of the option of hiring a new creative director to oversee the design team rather than leaving the team on its own. “We need a face, a person to represent the brand,” said Perna. “The heritage left by Ferré is huge and it takes a strong person to manage it. A creative director today must have managerial skills in guiding a team and must also understand the market direction and the consumers’ needs, especially when you have different lines and a wide product range. It’s not easy to find someone with all these requisites.”

Aside from the Ferré main line, the house produces the Ferré Milano diffusion line and the younger GF Ferré label.