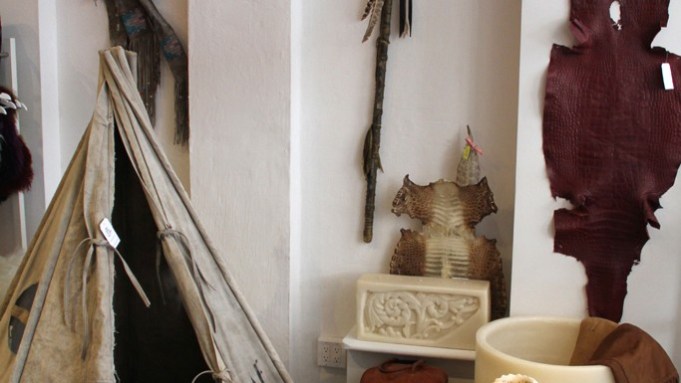 NEW YORK — Mitch Alfus is the biggest name in leather and fur few have heard of — unless they’re Donna Karan, Ralph Lauren or Alexander Wang, among others.

That’s all about to change now. Alfus, the self-appointed Leather King, whose Libra Leather is the go-to source for exotic skins for the designer community, has opened a six-week pop-up shop at 91 Grand Street in SoHo here.

Alfus wasn’t always a leather and fur expert; his career began in the hotel food and beverage industry.

Alfus’ father worked on Seventh Avenue manufacturing a line called Alfresco, designed by Viola Silver. “I went to visit my father, who was making clothes in Argentina in 1977,” he said. “I ended up staying in Argentina for 18 months,” said Alfus.

He moved to Rio de Janeiro for 11 months and built a finishing plant outside the city center, where he finished raw skins to export. A Leather King was born. He was 27 years old at the time.

When Alfus decided that South American skins were too thick and rough for some tastes, he went to Europe “because no one had ever sourced high-end leather for American designers there,” he said. Halston, Calvin Klein, Giorgio di Sant’Angelo, Bill Blass and Geoffrey Beene were among his early clients.

Alfus’ products are in demand because of the high quality of the skins and his willingness to experiment with various types of treatments. “I did metallic leather and crinkled leather and worked the leather and distressed it,” he said. “The designers didn’t know what I was doing. I would buy quantities and stock it. My father said, ‘What are you doing, you crazy kid? No one will buy this.’”

Alfus sometimes has left-over inventory and saw a market for finished products. “Polo Ralph Lauren asked us to make their home collection of pillows, throws, etc. It inspired me to start doing other eclectic things, such as road pants for bikers. I live and breathe leather.”

One look at the pop-up shop and that’s apparent. The store looks like a high-end hippie haunt, with multicolored leather Moroccan-style poufs on the floor, elk antlers and Malaysian tiger heads hanging on the walls and chairs covered in python, white kangaroo fur and bright-yellow dyed horse hide. A king-size bed is covered with a coyote spread ($20,000), and rugs are made from exotic skins such as deer and zebra. Hanging on fixtures and wall hooks are various handbags, from doctor’s bags to slouchy fringed styles.

Alfus has a circle-of-life philosophy, noting that none of the animals that provide hides for Libre Leather are bred for their skins and many are used for food in their native countries.

Alfus personally owns 40 pairs of leather pants. He sells stretch-leather jeans, priced $495 to $695, and biker pants for $795. “That’s half of what everyone else is selling them for,” he said. A reversible Spanish Toscana lamb jacket is $2,500.

“I don’t want to wholesale,” he said. “The mark-up is so high, it becomes the same price as all the designer merchandise. Then, there’s markdown money. I’m really not competing with the people I sell skins to.”