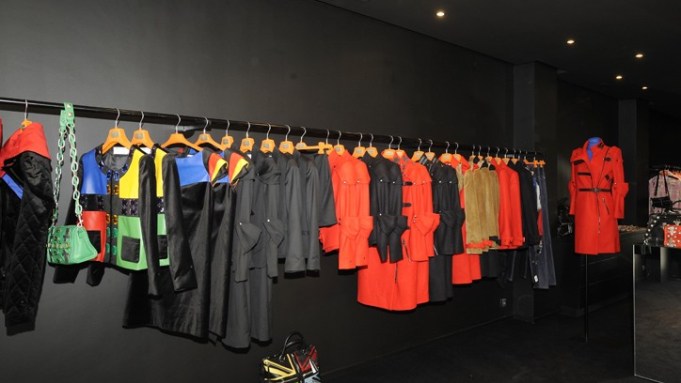 PARIS — It’s the first day of September and a paint-splattered Jean-Charles de Castelbajac skids into his new store on the Rue des Saints-Pères here fretting about the late delivery of works for his upcoming art exhibition.

Titled “The Tyranny of Beauty,” the show, scheduled to open at the La B.A.N.K. gallery today, will include copies of the original bust of Marie-Antoinette that, with the aid of a plastic surgeon’s scalpel, makeup and wigs, have been reimagined for the 21st century.

The designer has also been making over his brand into two distinct collections: the main JC de Castelbajac line and the fledgling diffusion line, JCDC by JC de Castelbajac. The collections each now have a dedicated store situated, symbolically, on Paris’ Left and Right banks.

For Castelbajac, who launched his brand in 1969, the move represents a renaissance, one, he said, that’s been facilitated by the support of “brother in arms” Peter Wahlberg, chairman of Swedish firm Atlas Design Group, which in November 2008 acquired the Castelbajac brand from Britain’s Marchpole Holdings plc.

“He has the capacity to transform my imagination into [sales]. It’s the first time I’m thinking that way,” said the designer, whose iconic creations include the blanket coat, his Eighties “Tribute” frocks from Mickey Mouse to Louis XVI, and the teddy bear coat. Pop icon followers of the brand, which has seen a resurgence in popularity among the young crowd over the past few years, include Lady Gaga, Beth Ditto and Rihanna.

Wahlberg said the main challenge was to commercialize Castelbajac, as a globally recognized yet niche independent French label, to appeal to a wider audience.

With France and Italy among main markets, the plan is to focus expansion on China. Wholesale revenues for 2009 totaled around 60 million euros, or $84 million at average exchange for the period, according to Wahlberg, who said sales have almost doubled over the past year.

Since August, Castelbajac’s bubbling pop-inspired JCDC by JC de Castelbajac line, which is into its third season, is the main act of a new concept store at the brand’s headquarters on Rue Vauvilliers. Castelbajac said he launched the line, which represents around 30 percent of sales, to service demand from young customers unable to afford pieces from the main collection.

The site also houses co-branding items, licenses and home furnishing items from the Pop Sweet Home line, which accounts for around 20 percent of sales. “We sell thousands of meters of wallpaper,” said the designer. An e-boutique version of the concept store is due to launch later this month, designed by Sweden’s Panagora. This will also host a blog and video projects, including — the designer hopes — reality TV-style footage of studio life.

Likening his studio to a Warholian-style factory, the JCDC by JC de Castelbajac line serves as a creative “playground” for Castelbajac who, at 60, still gets a kick out of seeing poetry in the absurd. “The Kermit massacre jacket for Lady Gaga.…These are not premeditated ideas,” said the designer, adding with a theatrical growl: “It comes like that — I need it.”

The designer also has a serious side, however, which has found new expression in the repositioned main line, housed in a new Rue des Saints-Pères unit. Measuring around 1,000 square feet, the boutique, which was inaugurated with a cocktail party Thursday, combines parquet flooring, black walls and mirrored merchandising units. Providing a pop of color, the dressing rooms are painted in Castelbajac’s signature primary colors.

As for the clothing, “twisted chic” day suits, coats and cocktail frocks carrying “punctuations of eccentricity” (think a black-on-black beaded Bambi dress) rub shoulders with revisited classics. Accessories are said to be strong, with a full footwear line due to enter stores mid-September. The Paris store already has a long waiting list for the Bambi shoes (replete with ears) from the fall collection.

Having slipped off the radar during the minimalist Nineties, Castelbajac partly attributes his recent comeback to the V&A museum’s retrospective of his work in 2006, titled “POPAGANDA: The Fashion & Style of JC de Castelbajac.”

But the real turnaround, he says, came from being approached by the late Archbishop of Paris, Jean-Marie Cardinal Lustiger, to dress Pope Jean Paul II, 5,000 priests and 500 bishops for their visit to Paris in 1997. Castelbajac chose a rainbow theme for the designs, creating for the Pope a robe covered in hundreds of colored byzantine crosses, embroidered by the ateliers of François Lesage.

The designer also believes his knack for combining creative marketing with his creations, such as his long-running cartoon licenses, has helped safeguard the longevity of his brand. When fashion turned corporate in the Nineties, most of his contemporaries fell on the “battlefield,” he said. “I asked myself who I was, where I was going and how to use my creative force, my patrimony, my intelligence and sense of strategy to come back,” said the designer, who is mulling perfume launches for his lines and plans to release a book about his life’s work over the coming months. Borrowing from something Cardinal Lustiger said to him, the tome’s title is to be, “There is No Copyright on the Rainbow.”