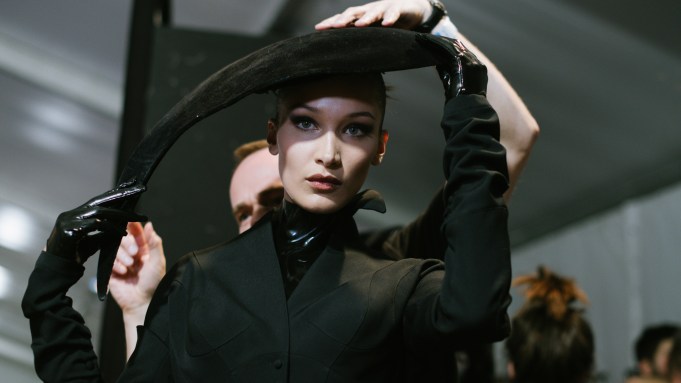 FLORENCE — How do you celebrate a 90th anniversary and close Pitti Uomo? Have several thousand guests (some estimates said 4,000) head to the hills outside of Florence to the Piazzale Michelangelo with a breathtaking view of the city for a fashion extravaganza to mark nine decades of the Florence specialty store LuisaViaRoma.

And extravaganza is the only word, given there were 102 looks worn by 61 female and 22 male models. The show marked the debut of Carine Roitfeld’s CR Runway events, along with her son Vladimir Restoin Roitfeld, and offered a compilation of some of the most significant looks of the fall season now in the LuisaViaRoma store, as well as a range of vintage pieces. They included three outstanding couture wedding gowns from the House of Christian Lacroix, as well as black shirts and white blouses courtesy of Archivi Fondazione Gianfranco Ferré and a trio of looks by Helmut Lang courtesy of David Casavant Archive, as well as Karl Lagerfeld and Mugler.

The open-air event began with an aria of “Return to Florence” from Puccini’s “La Rondine,” and then the models walked down the black, sleek runway, which was longer than a football field and almost as wide (which at times made it difficult for the audience to see the looks, even with the huge screens at the end projecting the show). The cast included models of different generations, ranging from Alek Wek, Doutzen Kroes, Natasha Poly, Karolina Kurkova, Mariacarla Boscono and Stella Maxwell to Bella and Gigi Hadid — the older sister actually opened the show in a Karl Lagerfeld tuxedo-inspired top with an inlaid tie matched with vinyl pants — and Vittoria Ceretti.

While it was a lot of looks, the pace was fast, and the models reunited at the end to stand on the steps of the huge statue, a reproduction of Michelangelo’s David.

It wasn’t over, though. A few minutes after the end of the show, Lenny Kravitz took the stage to play a few of his hits, including “Fly Away,” followed by “American Woman.” Then there was a chic dinner, hosted by Roitfeld, across the street, as the scent of jasmine filled the night air.

Highlights from Pitti Uomo 96: Everything You Need to Know