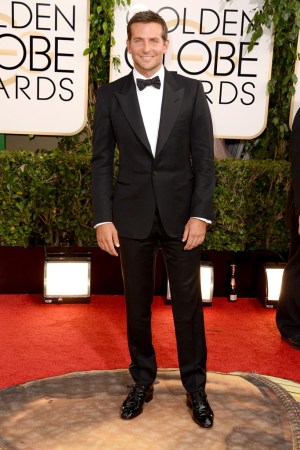 When it comes to red-carpet dressing during awards season, men’s wear can be compared to women’s soccer: always entertaining and fun, but not the main attraction.

Once the strapless gowns and diamond earrings are put aside, however, a whole universe of satin peak lapels, white shirts with Marcella piqué fronts, silk bow ties and all the other classic, formal details emerges from the shadows.

White tie is the most appropriate attire to complement long evening dresses, but that ship has sailed for most guys. Tuxedos are as formal as Hollywood gets these days. Following the traditional guidelines for classic tuxedo dressing should be easy, but leading men and their egos aren’t generally known to follow the rules. Instead, willingness to take calculated risks and having a sense of their own personal style are the key ingredients that can turn the red carpet from a fashion minefield into the ultimate style show.

Here’s a closer look at this year’s Oscar nominees and the show host with some tips on how they can find the perfect look to make them winners—at least on the fashion front—for Hollywood’s biggest night.

Bradley Cooper “American Sniper”
Bradley Cooper has no problem dressing like a movie star.  An avid Tom Ford fan, last year he dominated the red carpet with a great array of wide peak-lapel tuxedos worn with perfect hand-tied silk bow ties. This season, he seems to be favoring British designers like Thom Sweeney and Alexander McQueen. In the same vein, we suggest a Dunhill ensemble. A white peak-lapel double-breasted dinner jacket will only enhance his heritage for Old Hollywood style and continue the white blazer trend that gained momentum last year with Matthew McConaughey and Jared Leto—only this time it will be executed properly.  We loved his cropped haircut  and clean-shaven face from last year, so we also suggest a trip to the barber.

Eddie Redmayne “The Theory of Everything”
Eddie Redmayne is the most fashion-forward of the male nominees and his red-carpet appearances have always attracted the most attention from the fashion crowd. He’s scored several style hits, starting with his Les Miserables days when he opted for a couple of jewel-colored Burberry velvet tuxedos. This season, he has shown his wide style range by wearing Prada, Ralph Lauren, Tom Ford and his biggest hit to date, a Gucci velvet smoking tuxedo. He could stay there and still be a winner, but we think he should take a bit more risk by opting for a midnight blue Burberry tuxedo with contrasting black satin peak lapels, paired with an emerald pleated shirt and understated black bow tie. He should consider skipping the mousse and diffuser, since the products make his hair look too much like a bird’s nest.

Benedict Cumberbatch “The Imitation Game”
Personal style goes a long way with Benedict Cumberbatch.  His well-fitting suits, easy elegance and lack of a professional stylist — or so he says — make him a perfect candidate to become a fashion darling. Although he is rumored to wear mostly British Savile Row tailoring such as Spencer Hart, we suggest a more extreme version of himself with a skinny, retro-inspired Saint Laurent tuxedo paired with an ultranarrow tie. When it comes to shoes, he should opt for a regular patent leather brogue instead of the three-inch heeled boots that were shown on the runway. With or without high heels, he feels very Saint Laurent, so if the acting gig doesn’t pan out, maybe he can strut the catwalk for Hedi.

Michael Keaton “Birdman or (The Unexpected Virtue of Ignorance)”
There is a before and after when it comes to Michael Keaton. Long gone are the days of the slouchy, not-too-flattering, tailoring from the beginning of the season. Most recently, he’s shown a much younger and improved self. A refreshed-looking face is being paired with better eveningwear, a form-fitting — a bit too tight for our taste — Paul Smith tuxedo with grosgrain thin shawl lapels and jetted pockets. To continue his youthful renaissance, we suggest a look in midnight blue with a peak lapel and a generous silk black bow tie. The Hunstman tux silhouette is body conscious but falls elegantly—no need for a Batman suit. He also might consider wearing reading glasses to conceal the suspiciously “too fresh” look of his face; and he needs to be careful with the self tanner.

Steve Carell “Foxcatcher”
It is an interesting time for Steve Carell. He has been aging gracefully and the first hints of salt-and-pepper hair and stubble are only adding to his sex appeal. This season, Carell has been wearing very traditional, by-the-book evening looks that include one-button peak-lapel tuxes paired with hidden placket white shirts and simple bow ties. Channeling Hollywood’s Golden Era with the likes of Cary Grant would boost his style quotient and push him to the next level. Let’s hope there’s room for one more George Clooney. He should consider adding a hint of a pocket square and shirts studs to complete the old glam look for Oscar night. And if he wants to go wild, maybe even a white boutonniere.

Robert Duvall “The Judge”
Today the fashion world loves maturity — just look at the Céline and Saint Laurent ad campaigns this season. Robert Duvall can be next. But for that to happen, a couple of things need to change. First, no more wearing the same tuxedo everywhere, and second, opt for a brand that is within his comfort zone. In this case, a double-breasted peak-lapel Ralph Lauren tuxedo with a strong shoulder will make him stand out at the awards ceremony and let everyone know he can also be a style figure.  Remember 82-year-old Christopher Plummer in his winning velvet smoking jacket? Age means nothing when style dominates and when Balmain comes calling, we hope Mr. Duvall will remember us.

Mark Ruffalo “Foxcatcher”
No stranger to style, Mark Ruffalo surprised the fashion crowd last year by wearing a sleek, navy one-button Lanvin tuxedo with black satin peak lapels, matching bow tie and black patent leather oxfords. Since then, he has expanded his range by choosing brands like Dior Homme. We suggest he continues his style journey by wearing a three-piece, double-breasted Brunello Cucinelli tux with a shawl lapel vest and black studs. To complete the look, he should consider growing a mustache and embrace the fact that he is the modern-day Burt Reynolds.

Edward Norton “Birdman or (The Unexpected Virtue of Ignorance)”
Here is a nominee that, by altering a few small tailoring details, can switch from “No,” to “Go.” As much as we love a fashion makeover, here it’s not really needed. Norton always opts for comfort versus fashion, and his approach to easy tailoring might work for a friend’s wedding but not for Oscar night. He has been wearing nice Calvin Klein tuxedos that feel a little too slouchy and relaxed, and he obviously loves to pair them with a simple black tie with a four-in-hand knot — which is great but a bit uninspiring, to say the least. When faced with a fashion risk-adverse nominee, it’s best to stay close to home, so we suggest a Calvin Klein black tuxedo — but opt for a much sharper silhouette, with strong shoulders and pair it with a sleek bow tie and maybe even a hint of a pocket square. And if he really wants to go all-out, he might consider slicking his hair back — a major runway trend this  season. And Mr. Norton, please remember: no pain, no style gain.

Ethan Hawke “Boyhood”
Ethan Hawke is a risk-taker. He looks great in designer clothes and we hope he knows it. Last year at the Oscars, he ruled the red carpet with the perfect skinny shawl-lapel Dior Homme tuxedo paired with a silk, slightly oversize bow tie. Also, the well-executed crew cut and lack of facial hair helped the 44-year-old look better than most men half his age. He has continued his winning relationship with the French brand this season, but has yet to reach the level of sartorial splendor from last year. We suggest he don a Dior Homme tuxedo directly from the runway that would work with his boyish looks and elevate his fashion presence even higher, if that’s possible. He is, after all, the Prada ad campaign model this season and in the fashion world, that means pure heaven.

J.K. Simmons “Whiplash”
J.K. Simmons is already on the way to becoming an elegant gentleman. The nicely tailored notched-lapel tuxedo paired with silk tie that he has been wearing this season is a great beginning. No need to go too “fashiony,” so a heritage American brand like Brooks Brothers would be an ideal choice. The midnight blue tux will work perfectly with his piercing blue eyes, and a sleek bow tie would help frame his face. Attention needs to be paid to the neck sizing of the shirt, as he has been wearing them too big. The ultracropped haircut he sported at the Screen Actors Guild awards is extremely flattering and needs to be the cut of choice for Oscar night as well. He should consider, in following seasons, growing a beard and channeling Sean Connery: a James Bond white dinner jacket might be in Simmons’ future.

Neil Patrick Harris (host)
Neil Patrick Harris is in a league of his own. He is a great host and never takes fashion too seriously. His range is unbelievable — he looks as good in a white tie runway look from Thom Browne as in a totally traditional shawl-lapel Tom Ford tuxedo with bow tie and shirt studs. It’s worth mentioning that he wore dark blue nail polish to the Tonys and pulled it off. That night, he won for best performance in “Hedwig and the Angry Inch,” so if he wants to wear makeup, he should go for it. With that kind of attitude, the world is his oyster — so we suggest that for Oscar night, he use Bugs Bunny as the inspiration for the opening number and closing remarks. In between, he can revisit Tom Ford and go for a retro, groovy Sixties tuxedo from the fall collection. After all, fashion is supposed to be fun — so thanks, NP.