Acne Jeans is storming two fashion capitals at once.

By Emilie Marsh and Julee Kaplan on March 20, 2008
View Slideshow 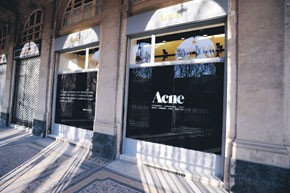 PARIS — Acne Jeans is storming two fashion capitals at once.

The edgy, Stockholm-based brand has set flagship openings for today in New York and Paris. The label is launching its first locale outside Europe at 10 Greene Street in New York’s SoHo. Its boutique at 124 Galerie de Valois in Palais Royal, one of Paris’ most elegant and hottest retail addresses, will open just hours earlier.

“It’s ideal — key cities and fantastic locations,” said the company’s president, Mikael Schiller. “Acne is involved in so many creative disciplines, we wanted to show the same creative energy in our shops.”

Acne has a knack for settling on unexpected locations. Its Stockholm flagship is in the former bank where hostages were taken in 1973 and the term “Stockholm Syndrome” was coined. And the brand’s palatial new headquarters in the center of the Swedish capital is in a 17th-century residence once owned by the aristocratic Wallenberg family.

“No two Acne stores are ever exactly the same,” said Jonny Johansson, creative director. “We try to bring to each store a sense of creativity at work. We call the stores Acne Studios and that’s how we want them to feel, like studios.”

Tucked under the arcades of the Palais Royal, the Paris boutique joins the likes of Marc Jacobs, Pierre Hardy and Rick Owens, and Stella McCartney and Ralph Lauren are expected to move in before the end of the year.

Despite the picturesque surroundings, the 650-square-foot, company-owned shop takes inspiration from a city square in Stockholm.

“It was important to add a bit of our heritage,” Johansson said.

“We hope to have special merchandise for each store,” said Johansson, disclosing plans for a limited edition range of high-end pieces exclusively for Acne stores.

Market sources estimated the Paris boutique would generate about 700,000 euros, or $1.1 million, annually. Including the Paris and New York flagships, Acne has 15 freestanding stores worldwide, which the brand aims to increase to 18 before the end of the year.

Western Europe remains the key market for Acne, which last year had sales growth of 42.2 percent, said Schiller, who added that the firm was looking into stores in London, Los Angeles and Amsterdam.

The New York store, a 1,000-square-foot space, will also carry the full range of Acne product in women’s and men’s. The store will be a collaboration with Opening Ceremony owners Carol Lim and Humberto Leon, who will run the location.

“Even though Europe is still considered our main market, the U.S. is growing into a very important market for us,” Schiller said. “Having a location in New York gives us a great opportunity to show the whole world what Acne is about.”