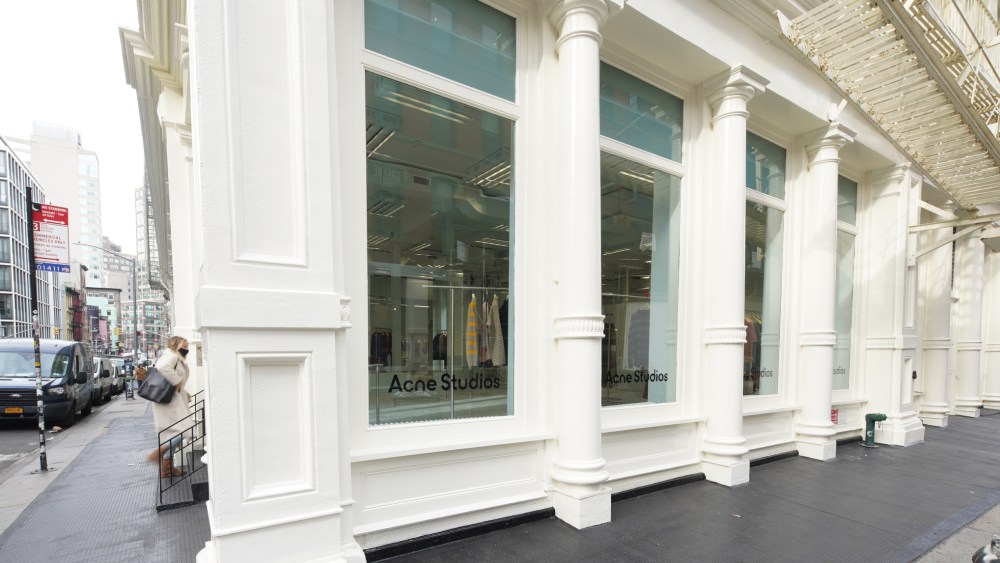 NEW YORK — Acne Studios will unveil an expanded 7,000-square-foot store at 33 Greene Street in SoHo on Friday — the largest store in its fleet.

Acne has been at that location for the past 10 years and took on an additional 3,500-square-foot space next door, which had been occupied by a furniture store. By combining  the two units into a single space, the Stockholm-based brand seeks to tell a complete Acne Studios story and showcase its women’s, men’s, footwear and accessories collections.

“We like doing it all together. People cross shop a lot. A lot of men shop for women and a lot of women shop for men,” said Mattias Magnusson, the firm’s chief executive officer, who flew into New York from Stockholm for the store opening.

The store carries looks from its women’s and men’s collections, shoes and accessories, including the brand’s emblematic Musubi bag.

“When we create a store, it’s really important for us to work with the city and the actual space. That’s why I’m so proud of how they’ve taken care of the building while infusing our DNA into it,” he said.

The SoHo store was designed by Barcelona-based studio Arquitectura-G with direction from Acne Studios creative director Jonny Johansson. The store plays with translucency and assorted angles, and explores sharp shapes. The boutique features  an artificial landscape of translucent glass panels, as well as custom wall-to-wall tufted wool carpeting by Swedish rug and textile flooring company Kashall, a regular partner of Acne Studios. Lighting is by French designer Benoit Lalloz, a longtime collaborator, which brings out the previous industrial character of the New York neighborhood.

In contrast to the sharply edged surfaces, the floor acts as a soft mantle in the color of glass. This particular hue (a pastel mint) spreads throughout all the elements of the store, creating a uniform atmosphere. There are six dressing rooms throughout the store.

Overall, women’s accounts for about 60 percent of Acne’s business, and men’s wear is 40 percent, a ratio that is reflected in the SoHo store. Acne has two other stores in New York, one in the West Village and one on Madison Avenue. There are seven stores in the U.S., and 60 globally. In New York, the company wholesales its collections at Nordstrom and Saks Fifth Avenue.

“When the pandemic hit, so many projects were put on hold, but this one we wanted to continue with,” said Magnusson, explaining that they conceived the store two to three years ago, but started constructing it six months ago. The Greene Street unit had already been “the best-performing store in the world, but it was so crowded, you couldn’t give people the real experience,” he said. “If you’re  going to do retail today, you have to offer people a full experience.”

And what would make a full experience?

“Architecturally it’s very interesting, and we can properly show the collections,” he said. Customers can work “with the client associates who are very knowledgeable about the brand.” He also plans to host events in the space.

Magnusson predicts that the handbags are bound to be bestsellers, and now the store provides the space to show them off. The mini Musubi handbag, which takes up a full wall in various colors, retails for $1,050 and the micro Musubi,  which was launched last year, retails for $690. The Musubi handbag is made in Italy from smooth leather and has knots on the side to mirror obi sashes on traditional Japanese kimonos.

Right now the store features fall and spring pieces, but a lot more spring merchandise will be arriving next week, he said. The collections are manufactured in Italy and Portugal.

One feature of the store is an opportunity to personalize a winter scarf, which can be done in three to four days. There are six scarves, five color threads and all the letters and various motifs.

Among some of the women’s sportswear featured in the store are knits, including luxurious chunky ones, multicolored sweaters and oversized cardigans, retailing from $250 to $1,000 and jackets, including puffers and shearling jackets, that go from $700 to $2,000. Also on display are printed dresses, blouses, suede jeans, along with beanie hats, gloves, sneakers, totes, headbands and printed scarves on low tables.

Walking through the men’s side at the entrance, he predicted that the outerwear jackets will probably be among the bestsellers as well as the blazers “which have always done well.” The store offers relaxed tailoring with workwear staples in sophisticated fabrics.

An exclusive at the store is an oversized silk scarf that illustrates Stockholm, New York and a plane, noting that the two cities are 3,924 miles apart.

The shop also sells Acne Paper, its magazine (that looks like a coffee-table book) that explores creativity and culture. Magnusson noted that Acne Studios was founded in 1996 as a creative collective that cross pollinates across fashion, the arts and architecture. The magazine comes out one to two times a year, and the current edition, which is the 16th, is 500 pages and sells for $45.

“It’s a way to share what we’re inspired by,” said Magnusson.