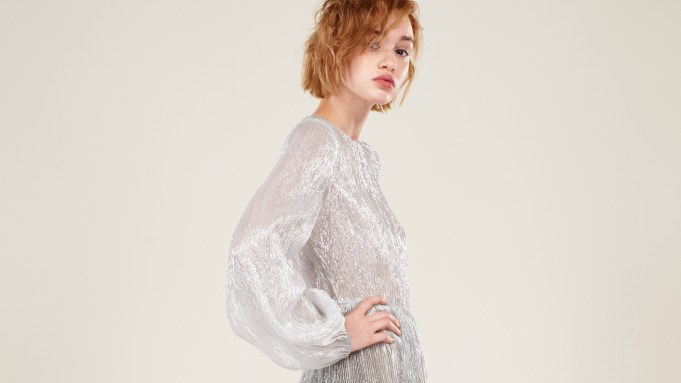 NEW YORK — For Adam Lippes, life as a fashion designer is much better the second time around.

Lippes spoke earlier this week at a trunk show for his collection on the Upper East Side at the home of his mentor, Marigay McKee, the former chief executive officer of Saks Fifth Avenue. He met McKee when she bought his collection when she was chief merchant at Harrods. Today McKee is ceo of her own firm, MM Luxe Consulting.

“I admire her enthusiasm and her smarts,” Lippes said of McKee. “She has been mentoring me and helping to guide me. She likes my collection a lot. All young brands need a cheerleader.”

About 50 guests were invited, friends of Lippes’ and McKee’s. Mingling among the guests, and enjoying much attention, were the “girls in residence” — Sutter, a border terrier, and Coco, a shih tzu. Their presence led to a conversation at one point during which Lippes disclosed that he is thinking of adding another dog — a Goldendoodle — to his canine brood. He already has three Labradoodles.

Lippes’ line is at the designer level, with corresponding price points. Opening prices start at $450, although many items were far higher, such as a blush colored suede skirt for $1,600. Some of the dresses were in the $2,100 range.

According to Lippes, half of his business is in the U.S. and the other half overseas. His designer collection is in 125 doors in 22 nations. He started his namesake collection in February 2013 and after 2.5 years is at break-even. Lippes, who was creative director for Oscar de la Renta from 1996 to 2003, said the designer level was really where he always wanted to position his line.

The move upmarket to the designer category follows the shuttering of the designer’s first line, Adam Adam Lippes, a contemporary brand that was acquired by Kellwood Co. in 2010. Kellwood is owned by private equity firm Sun Capital Partners. In 2011, Kellwood decided to shutter Adam Adam Lippes to focus on the larger “core brands” in its portfolio. Looking back, Lippes said the pressures in the contemporary space were tough.

“It was all about more, more, more. Grow, grow, grow. Faster, faster, faster,” he said, adding that his current collection is all about the line and “making beautiful pieces that women will like and put in her wardrobe.”

The closing of his first company was a learning experience that helped shape some of the decisions in his current business. “We were trying to grow very fast. When I launched [Adam Lippes], I turned down more stores than we took,” he said. The designer also spoke about competition in the contemporary space. “All lines have an immense amount of competition. A lot of the brands follow the same trend, and then you end up competing just on the price point.”

Lippes isn’t a fan of the see now-buy now-wear now trend, noting that the idea is a risky one. “It’s very hard to know what a customer wants and you are now producing even before she has seen it. That’s a risk,” he said, suggesting that a better option is trying to ship pieces from a line to the store that is weather appropriate at the time of delivery.