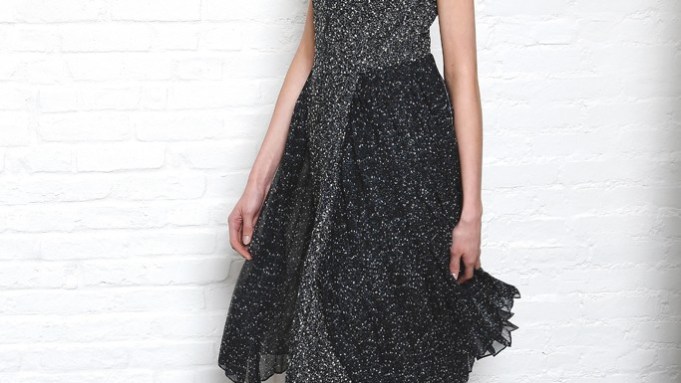 As for cautionary fashion tales, Adam Lippes’ luckily comes with a happy ending. After a one-year absence during which the designer bought back his name from Kellwood Co., he picked himself up, dusted himself off and is now reentering the industry with an impressive lineup of elegant, easy clothes.

“This is a progression, an evolution of that [earlier] line in a lot of ways, certainly in the style and aesthetic,” Lippes said on Monday, sitting in his chic SoHo apartment that also serves as his business headquarters. “This is certainly the first time I have done something totally on my own. I had two very different financial partners before: first Atelier [Management LLC], which was Richemont-funded, and then Kellwood.

“This is who I am as a designer,” he continued. “It’s true American designer sportswear. It’s important for me to create a wardrobe of staples for a woman with clothes that she can wear that don’t wear her. Words that come to mind are simplicity, elegance and ease.”

Where the previous incarnation was at the contemporary level, this time Lippes, who honed his skills at Oscar de la Renta for eight years before launching into underwear (remember a+dam and a+eve?) and then apparel, is aiming at the entry-level designer tier. It shows in his fabrics and execution. There are sporty silk track pants, a white shirtdress with kilt pleat back detail and knitwear pieces like an Italian merino wool top with a sheer V insert and an oversize Italian jersey sweater with floral embroidery. Bonded fabrics add a luxe touch, demonstrated on a voluminous leather skirt with a cashmere lining and a lace-and-duchesse-silk version.

While retailers won’t see the new line until next week, Lippes hopes to launch the collection in a focused way with one department store and one e-tailer, as well as about 30 high-end specialty stores, many of which he already has established relationships (his previous stores included Harrods in London, Lane Crawford in Hong Kong and Marissa Collections in Naples, Fla.). “A lot of designer stores carried us in the past because we had the aesthetic,” Lippes said, noting that initial retail conversations have resulted in positive feedback.

He will also relaunch his Adam basics line of T-shirts and underwear at adamlippes.com this spring. He plans to expand it into a fuller assortment that could, he said, range from cashmere hooded tops to T-shirt dresses.

In the first year, Lippes anticipates $1 million in wholesale sales.

The designer has assembled a small team, all of whom worked with him in the past, while industry executive Donata Minelli, who left her position of chief executive officer of Yigal Azrouël last month, is now an adviser to Lippes.

For the moment, this comeback is self-financed. “Through the big investors I had in my past life, I saved some money,” Lippes said. “We have a small team and everyone chipped in. It’s been a really good moment in my experience with fashion.”

It wasn’t always this way. Lippes joined forces with Kellwood in 2010 but the relationship ended in December 2011 when Kellwood pulled the plug on the business a week before the designer was due to show his pre-fall collection. Lippes bought back his name last May, and in the process renegotiated the noncompete clause earlier than was originally planned. “It was a learning experience and a growing experience and I am happy it’s behind me,” he said. “If you learn from these things, it’s great. I feel that looking back now, I was sad, angry, mad, but I am really fortunate to be able to be in this position, relaunching a year later. I have to thank Kellwood for helping me get back to this position. They could have prevented it so I feel fortunate I was able to acquire my name back.”

Lippes will present the collection on Feb. 11 and 12 in a raw office space on the 22nd floor at 3 Columbus Circle. There, he will recreate his own SoHo living room, which, after all, has played a key role in his relaunch. Speaking of his downtown digs, he plans to keep working from home until he outgrows the space. After all, he says, “It’s an easy commute.”