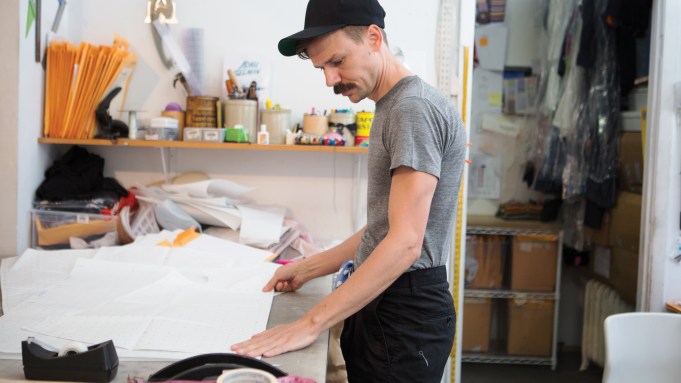 Adam Selman is a busy guy.

On Sept. 8, the 34-year-old designer will present his eighth collection — and his seventh at New York Fashion Week — in a runway show at Milk Studios. But that’s only one piece of his pie. On the side, Selman designs custom looks for a steady stable of celebrity clients — most notably Rihanna, with whom he has a long-standing relationship (see her “naked” crystal dress at the 2014 CFDA Awards) and who wore one of the designer’s signature “baby” graphic Ts onstage at the MTV VMAs. Additionally, as one of 10 CFDA/Vogue Fashion Fund finalists for 2016, Selman is working on a tech-related design challenge presented by Intel, for which important deadlines are looming. (If only he could clone himself.)

But the Belton, Tex., native — known for his scrappy, sexy clothes — doesn’t let the avalanche of projects get him down; he approaches it all with a cheerful, buoyant attitude. A few weeks ahead of fashion week, Selman let WWD in on his juggling act in and out of his studio, as he managed multiple projects.