The South African capital of Pretoria is not exactly considered a fashion hot spot. 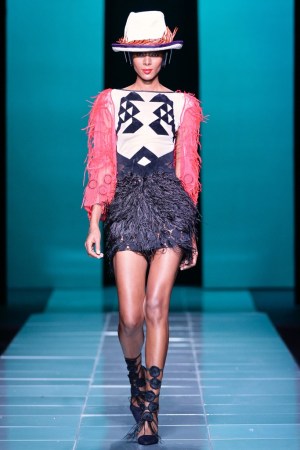 JOHANNESBURG — The South African capital of Pretoria is not exactly considered a fashion hot spot, but Precious Moloi-Motsepe, chairwoman of African Fashion International, or AFI, organizers of Mercedes-Benz Fashion Week Africa, or MBFWA, believed that it was time for the city to shine.

“There are a lot of fashion-conscious people living in Pretoria,” she said, “and that’s why it made sense to hold MBFWA there. In fact, more designers should start opening stores in Pretoria. So far, we only have Malcolm Kluk and Christiaan Gabriel du Toit.”

The duo, who won this year’s Designers of the Year award presented at MBFW Africa, opened their Pretoria boutique earlier this year. Still, Pretoria was admittedly a schlep for many people, designers and the media included, who were mostly based in Johannesburg, and organizers of the various fashion shows were scrambling to arrange transport for guests to and from the Tshwane City Hall venue. Mozambican designer Taibo Bacar, last year’s Designer of the Year winner, was unfazed by the distance. “I like to think Maputo is just next door, so the 45-minute drive to Pretoria is a breeze for me.”

Apart from showing his solo collection, Bacar was also one of 14 fashion and accessories designers from all over Africa invited to take part in the Samsung AmazeAfrica showcase, a collaboration that paired established and emerging designers to create looks inspired by technology.

Pointing out Samsung’s growing relationship with fashion, Thabiet Allie, head of Content and Services for Samsung Electronics Africa, said the technology giant “now has the opportunity to create a conversation through fashion.”

The resulting conversation was certainly creative and dynamic. New York-based milliner Albertus Swanepoel was all set to work with Duro Olowu, “which would have been fantastic,” until the London-based designer apparently pulled out. Swanepoel was nevertheless pleased to work with South African designer Jacques van der Watt of Black Coffee. Katherine-Mary Pichulik, an up-and-coming accessories designer, was paired with Bacar. “Basically, we were given the challenge of creating an accessory or holder for the notebook. I’ve done a range of four different pieces, each one inspired by the cycad, a plant indigenous to Africa. So we looked at the texture, the color, the material, the line…and Taibo incorporated that into elegant dresses, while I worked on the production of accessories to go with that,” said Swanepoel.

Bacar described his clothes as “always simple, clean, classic, very elegant and very commercial. The cycad was my inspiration. I take the colors of the plant and the cut, that’s why I used green and made a lot of cuts and pleats in the design, like the plant.”

Laurence Chauvin-Buthaud, who is based in her native Ivory Coast and France, designs the men’s wear line LaurenceAirline. She was paired with Cape Town-based accessories label Missibaba, whose signature is hand-worked leather. Chauvin-Buthaud’s men’s wear, which she says does well in Copenhagen and Sweden, has been lauded for its crisp, clean lines, and clever use of tribal African prints as geometric detail.

“I am between Africa and Europe,” she said, “but my roots are always here. In terms of my design, I always do the connection between my African roots and something of the future, of France. Like I am a mix, I do a mix.”

For the AmazeAfrica showcase, the pair were assigned herpetology as inspiration, and “it was a very good match, turtles and snakes,” said Chloe Townsend of Missibaba, who sent down laptop sleeves in woven leather to complement the LaurenceAirline men’s wear. “It took ages to do, as it involved quite precise cutting and hand-scaling all the edges to get the effects we wanted.”

The MBFW Africa Fashion Awards winner for Emerging Designer of the Year, Tanzanian-born and South Africa-based Anisa Mpungwe of Loin Cloth and Ashes, teamed up with Doreen Mashika of Tanzania, whose designs are in store at Eileen Fisher and Anthropologie as part of a special East African project. “It was pretty interesting to work together,” Mpungwe recounted, “because the deadline was so timed that everyone was rushing to get stuff done. It was also interesting because our inspiration was bees, wasps and ants. I am mostly an African prints designer, so working with different kinds of prints was a whole other world I discovered, like silks with a kind of sheen and texture to resemble a bee’s wings, for instance.”

Other designers participating in the showcase, part of Samsung’s global Accelerating Discoveries and Possibilities initiative, included Adèle Dejak and Rift Valley Leather of Kenya, Projecto Mental of Angola, 1982 by Nane Brenu of Ghana and Italy, as well as Marianne Fassler and Quamta of South Africa.