Last month’s groundbreaking news about the potential impact of climate change on plankton and biodiversity literally could not have happened without the support of French designer Agnès b.

As the lead sponsor for the Tara Oceans Expedition, which compiled the research after nearly four years at sea, Agnès b. bought the schooner Tara in 2003 and has been quietly championing maritime research ever since. The 35,000 samples collected by Tara specialists during the 80,000-mile expedition in 2009 to 2013 includes a catalogue of several million new genes that will transform how we study oceans and assess climate change.

The company’s chief executive officer, Etienne Bourgois, who is also the designer’s son, still looked slightly mystified by the reality of it all, during an interview Friday in New York’s NoMad Hotel. Annually, Agnès b. spends $766,000 to finance Tara’s $1.8 million operating budget.

Tara’s scientific director, Eric Karsenti, was “quite convinced” discoveries would be made in due time, but Bourgois, not so much. “From Day One, I did not know that it would go this far. And we are kind of proud it,” Bourgois said. “Twenty-fours hours after the news was released, I saw so many headlines from around the world. We also showed that with a small sailing boat – 110 feet — you can do very good scientific research.”

The fashion executive, who started working with his mother in 1979, took to the seas on a polar expedition a friend was leading in the Arctic in the Nineties. In 2001, he met New Zealand explorer and two-time America’s Cup winner Sir Peter Blake. Two years after Blake was killed by pirates on board the Tara, Bourgois met Blake’s artist wife and later bought the Tara for an undisclosed sum. Like Agnès b., who has supported artists throughout her career, the Blakes used Tara for scientific and artistic pursuits. This week, 11 artists who were aboard the Tara during a Mediterranean Sea study last year will showcase their work in Paris.

In regard to the recent study, Bourgois said most people don’t realize that plankton absorbs CO2 emissions and creates 50 percent of the oxygen we breathe. “The oceans are getting warmer. Many studies are not taking into account how essential oceans are to the future of our planet. And their affect on the food chain with so many people depending on fish.

“In France, people asked, ‘As a fashion company, why are you doing this?’ because it’s usually a big oil company or a large company that does these types of things,” Bourgois said. “Fashion is very important because it sets trends. Maybe a lot of young people will follow this and it will make people think about this issue.”

Through the support of Prince Albert’s Foundation and the Environmental Defense Fund, Tara Expeditions will stage an educational public program during the Conference of the Parties, or COP21, in December. Four-thousand school children will tour the Tara in Paris and workshops will be held in the “Ocean & Climate” space, which will be set up near the Petit Palais and the Grand Palais, where the climate change discussions will take place. Citing pollution, concerns about access to fresh drinking water and other environmental worries, Bourgois said, “We are not allowed to think anymore, ‘Are we responsible?’ We are responsible. We have to decide how we should act. And we have to push politicians to change the rules.” 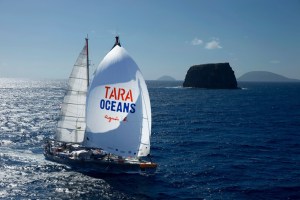 Noting how United Nations Secretary General Ban Ki-moon sailed the Hudson River on the Tara two years ago and was keenly interested about the research, Bourgois said the U.N. and UNESCO continue to be stalwart supporters.  Agnès b. will celebrate last month’s report with Tara’s scientists and other members of the 200-person research team at a party in Paris.

“She is very proud of this project even though she doesn’t follow the scientific problem, which is not so easy to follow, by the way. It’s very complicated. But she is very enthusiastic,” Bourgois said.

In New York “to restart” the U.S. business, he will miss out on the festivities, but will be busy scouting new store locations near the Bowery, where A.P.C. and Another Brand are newcomers, as well as Williamsburg and other neighborhoods.

“We’ve been opening stores in Asia a lot, but not taking into account enough the U.S. market,” Bourgois said. “After France didn’t support the Iraq War and the dollar weakened, French goods lost some luster with Americans, but now French food, fashion and goods seems to be back in vogue.”

With 2,200 staffers around the globe and 250 freestanding stores and concept shops, Agnès b. aims to reclaim some of the U.S. business with new boutiques and potentially with department stores. Opposed to advertising, Agnès b. prefers to collaborate with artists and feature their work in her various galleries. With nearly $330 million in annual sales, the family-owned label sees its share of unsolicited potential investors, especially those from China, but no sale is imminent.

Having opened a store in SoHo in 1980, when Dean & Deluca was the only other brand-name tenant in the neighborhood, Bourgois wanted to have a 35-year anniversary party, but his mother nixed that idea. “She doesn’t like anniversaries,” he said. Nor is she in serious talks with a successor. “She’s starting to think about that and has invited some guest [men’s wear] designers like Adrien Beau last year. She feels that sooner or later, someone will come to her or she will meet somebody, but at the moment…” he said. “Maybe she is just thinking but it is very personal. She’s like an artist. She wonders, ‘How would someone do what I do?’ I’m sure it’s a different feeling in her mind.”

The company is also in the midst of establishing a foundation that would enable it to open a 30,000-square-foot museumlike space to house the designer’s expansive art collection, galleries for contemporary art shows, a screening room and educational facility. Noting how his mother was among the first to buy work from Nan Goldin and Martin Parr, Bourgois hopes the foundation will open in an industrial neighborhood outside of Paris within the next few years. A French architect has already been approached by Agnès b. Her personal art will also be shown next month at The LaM, the Lille Métropole Museum of Modern and Contemporary Art.

“She does so many things personally. She’s so imaginative. She wants to kind of control everything, which is sometimes kind of difficult. But it’s her life,” he said. “She loves doing clothes and everything else. Her day-to-day life is crazy. She’s always thinking. Creativity seems to be so easy for her. She never switches off. She’s always trying to do better and better. One day she might say something is good, but the next day she wants to do it over again.”