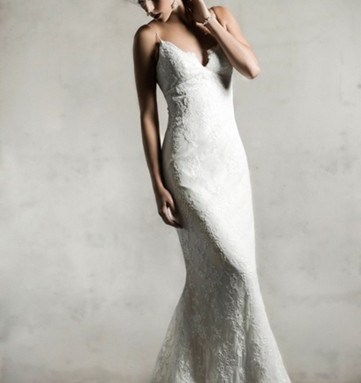 Have you heard the one about the bride who fell in love with the $13,000 Monique Lhuillier wedding gown, bought it and then reneged after a blow out with her recently laid-off fiancé? She settled for an $8,000 gown instead.

Or, what about the bridal consultant who abruptly closed her three-year-old salon and left 51 jilted brides waiting for their purchased gowns?

Jokes they’re not — these are some of the real-life tales circulating among wedding industry executives in these recessionary times. Given the economy, high-end bridal designers and upmarket bridal salons are scrambling for new ways to woo their clients, whether it’s introducing lower-priced collections or beefing up marketing. At the same time, they’re tightening their own purse strings by establishing summer hours to cut back on overhead expenses and steady their businesses.

Already, a handful of venerable retailers have shuttered, or are looking to close, their doors in the face of slumping bridal interest, fast on the heels of Saks Fifth Avenue, which eliminated 16 out of 18 of its bridal salons earlier this year. Philadelphia-based Suky Rosan, known for lines such as Vera Wang and Romona Keveza, closed earlier this summer. Others planning to phase out later this month include Yolanda in Boston and Louise Blum in Houston. Blum’s store, which has been owned by Alfred Angelo, is being converted into an Alfred Angelo boutique.

Mountain Avenue Bridal closed its doors in Fort Collins, Colo., earlier this month, according to The Denver Post. Fort Collins police are investigating owner Patty Burling to see if criminal charges are warranted for not fulfilling the orders for 51 brides who had purchased dresses, according to Fort Collins Police spokeswoman Rita Davis.

“There are a lot of desperate stores out there,” said Grace Young, a buyer for Bridal Galleria, a 24-year-old salon in San Francisco that carries Vera Wang and Jim Hjelm, and also helped the bride who changed her mind about the $13,000 Monique Lhuillier gown. “We’re hearing about ridiculous discounting, prices which we won’t match. Such aggressive discounting makes them more volatile to fail.”

Young and others, who are hoping not to hack away at their margins, are bringing in lower-priced lines and designers. In the next two months, Los Angeles-based Monique Lhuillier will start shipping Bliss by Monique Lhuillier, a new bridge collection of bridal gowns retailing from $2,300 to $3,500 compared with its signature gowns, which range from $4,000 to $8,000, and its Platinum line, which sells for up to $20,000. About two-thirds of the company’s retail base has picked up the 15-piece Bliss line, which offers fewer details, simpler fabrics and is produced in China instead of the company’s Los Angeles factory.

The risk of cannibalizing sales among the divisions is minimal at a time when most stores are feeling the effects of the ailing economy, said Tom Bugbee, chief executive officer of Monique Lhuillier.

“I don’t know if we’ll be going back to the shopping patterns of about three years ago…so we think we’ll be able to capture a market we don’t have,” said Bugbee, noting company sales are down about 10 percent compared with the year prior. “It’s important to give more options to the consumers and retailers.”

Angel Sanchez Inc., which has lowered wholesale price points by 15 percent, has tested a moderately priced collection since October called Angel by Angel Sanchez, a 10-piece line, which retails between $2,000 and $3,000, nearly half the cost of the company’s couture gowns. The line has opened doors to new accounts, said Laura Greeley, sales director for Angel Sanchez.

Bridal Galleria has picked up Bliss by Monique Lhuillier along with Watters. At Lili Bridals in Tarzana, Calif., where business is down 30 percent compared with the year prior, store owner Lisa Litt has begun carrying Casablanca and Mon Cheri Bridals. “Our average price point was $1,800 and, now, it’s more like $1,000,” Litt said.

Some brides are seeking alternative venues for their gowns, such as eBay. In the 90-day period between May 24 and Aug. 21, eBay posted 12,503 listings of wedding gowns. But even eBay sellers gripe their shoppers are crunching numbers. Wedding gown sales are down 20 percent at one eBay store, Miniboutique, even though owner Jesenia Asilis-Swinsburg has lowered prices by 10 percent.

For brides looking to incorporate something borrowed on their wedding day, another option is renting their dream frock. In this eco-conscious age, the stigma of a used wedding dress has disappeared, said Samantha Goldberg, a celebrity event designer, who notes the rental business is up at least 15 percent. Goldberg said some bridal stores are adding a rental component to their retail mix.

“I think it’s smart business,” Goldberg said. “The retailer can rent that dress multiple times so there’s profit there.”

While the shift in thinking has prompted some retailers to stage their own online sample sale wars, such as Betsy Robinson’s Bridal Collection in Baltimore, and even test summer hours, such as JLM Couture, which is now closed on Mondays, some designers are fighting back by pouring on the customer service. A number of bridal gown makers, including Lhuillier, are offering complementary rush services as brides take longer to decide on their purchases. Some can deliver the goods in two weeks compared with the traditional window of three months to six months.

Dallas-based Watters Brides updated its Web site in April to better showcase dozens of gowns eligible for fast delivery. “We’re very aggressively targeting quick delivery,” said Maria Prince, vice president of Watters. “Why should brides settle for second-best gowns found online and off-the-rack when they can have the real thing?”

Other designers are letting their A-list stores borrow gowns for a couple of weeks, giving retailers a break from buying samples. After the April market, designer Anne Barge loaned six to eight gowns to about 25 percent of its stores, giving them an opportunity to present new styles to their clients, which normally wouldn’t be available until September. The designer was testing the pieces, which were priced under her typical $4,000 range.

Debbie Watts, owner of Bridal Portfolio boutique in Southlake, Tex., welcomed the program. “It’s a way for everybody to spread the wealth,” said Watts, who said she sold two gowns from the Anne Barge collection. “There’s nothing worse than buying it at market, then trying to sell it and no bride wants it.”

Increased trunk shows are another avenue to cultivate sales and an opportunity for designers to throw out price incentives without calling them sales. Barge said she is jammed with trunk shows through December and JLM Couture will post weekly trunk shows on its Web site through March. Watters’ Prince said the company is taking the gatherings one step further with the staging of “girls’ night out” events, involving vendors, makeup artists, wine tasting and catered food. More than 120 customers attended the June event at Betsy Robinson’s Bridal Collection boutique.

“These events take the edge off selling if the brides are nervous about coming to the store,” Prince said.

Barge is also offering a spin on activities by promoting boot camp for her retailers. This month, she’s flying about 20 to 25 store representatives to her headquarters in Atlanta for a weekend seminar to provide product training and coaching on selling her line. “Our job is to keep retailers in the black,” she said.