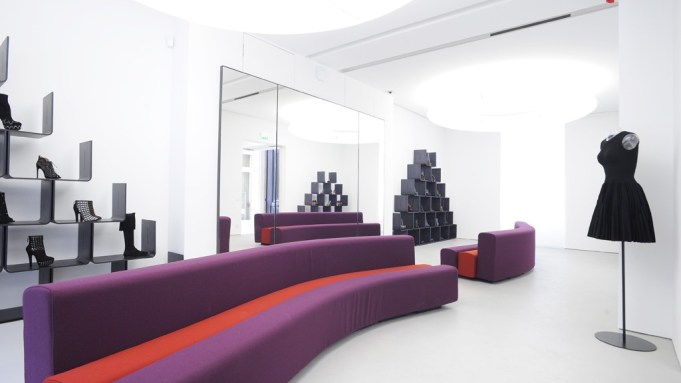 PARIS — In his inimitable on-my-own-terms way, Azzedine Alaïa has opened a three-story boutique a stone’s throw from Paris’ most famous luxury strip, the Avenue Montaigne.

Housed in an 18th-century mansion at 5 Rue de Marignan, the store boasts no window displays and a minimalist, futuristic decor worthy of a science-fiction film.

The boutique opened quietly over the weekend for press tours, but the first two women to cross the threshold were shoppers, either curious or eagle-eyed, having spied Alaïa’s name etched into the pale stone. (They left with a pair of shoes.)

The designer tapped many of his design and artist buddies for the project: Marc Newson for UFO-like circular light fixtures; Martin Szekely for angular racks anchored in the floors, and Kris Ruhs for a chandelier of brushed steel garlands that dominates the coiling, four-story marble staircase.

Sozzani was referring to Alaïa’s original Paris boutique in the Marais district, shielded behind a big red door that buzzes open for private clients. That unit, housed within Alaïa’s sprawling headquarters and dating back to 1990, is to remain open in a building that will eventually become the designer’s foundation, Sozzani noted.

Compagnie Financière Richemont took a majority stake in Alaïa in 2007, and funded the new retail venture. The fourth floor of the 14,000-square-foot building is to house Alaïa’s accounting, administration and finance departments.

While best known for his curve-enhancing dresses and tailoring, Alaïa devoted the main floor of the new shop to accessories — shoes to the right and handbags and small leather goods to the left. Flat screens embedded in one window broadcast saturated images of Alaïa fashions.

The shoe salon leads to a courtyard appointed with marble tables by Angelo Mangiarotti and chairs by Harry Bertoia, from which visitors can gaze up at a vegetal wall by Patrick Blanc.

Ready-to-wear is featured on the two upper floors: daywear on two and evening-oriented fare on three. Spacious fitting rooms boast the same Szekely racks and Newson light rings as the sales floor.

It’s been a busy Paris Fashion Week for the Tunisian-born designer, who is the subject of a sprawling retrospective that just opened at Palais Galliera and the Musée d’Art Moderne de la Ville de Paris.