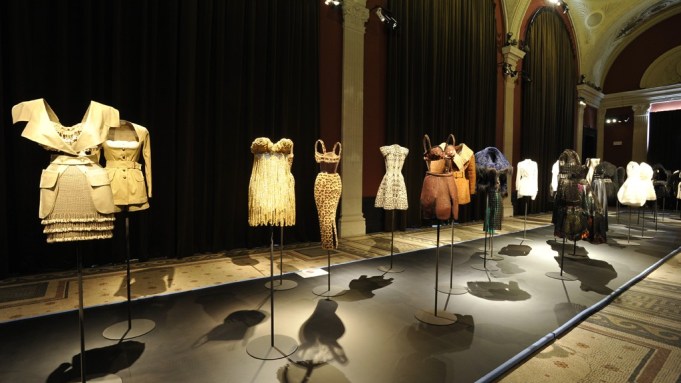 PARIS — “An Alaïa garment is like an Hermès handbag,” fashion curator Olivier Saillard mused as he led a tour of the Azzedine Alaïa retrospective that’s slated to open to the public on Saturday. “He makes clothes that endure.”

Saillard’s exhibition, showcasing about 80 dresses amidst the just-restored 19th-century splendor of the Galliera Palace, mixes designs from the Eighties through to 2013, telegraphing the evolutionary, on-my-own-terms approach of the Paris-based designer.

“When one doesn’t have a fear of repeating oneself, there’s a strength,” said Saillard, explaining that Alaïa has elaborated upon several fruitful ideas over decades: unfurling new versions of his “mummy” dresses, composed of bands of fabrics, since the Eighties through to 2013, for example, or exploring the infinite possibilities of leather, draping it like chiffon, perforating it or molding into corsetlike belts.

The showcase marks the reopening of the Fashion Museum of the City of Paris after four years of renovation. The choice of Alaïa is a wink to the Duchess of Galliera, who donated the building to the city in 1895, with the suggestion it be dedicated to sculpture.

To heighten the sculptural nature of Alaïa’s designs, Saillard opted to show the dresses on invisible, headless mannequins that show every curve (except for a clingy knit Giacometti dress, purposely mounted on a flat shape like a cutout doll).

Saillard counts the Tunisian-born designer among a handful of couturiers — Madeleine Vionnet, Cristóbal Balenciaga, Charles James and Madame Grès — who were architects of fashion, contending that in every Alaïa garment “you have the sense of the body.”

The curator also cited “the sense of his hands,” alluding to his penchant for toiling late into the night, perfecting his body-conscious shapes.

Spying a bra top and fringed skirt in golden chains suspended in midair, one instantly completes the picture by adding the unbeatable gams of Tina Turner, who famously wore the racy ensemble on her 1990 tour. Dresses donned by other famous women — including Rihanna and Grace Jones — are also displayed.

There are surprises, too. Saillard opted to put evening gowns front and center, including a series done in delicate chiffon. He also dedicated a room to curve-hugging suits and coats, arguing that Alaïa is a rare couturier who excels equally at tailoring and fluid garments.

This room and others hammer home the austerity of Alaïa’s clothes, rarely employing prints, strong colors or embroideries — save for his beloved grommets, a detail that recurs over decades, starting out as a decoration on gloves.

Little-known styles on display include a few safari jackets; one scooped out in the front with a frothy bra spilling out.

The exhibit runs through Jan. 26, with a preview event scheduled for tonight.