The digital event will feature a performance by Hajiba Fahmy and a chat between Campbell and Karlie Kloss.

Hajiba Fahmy wears in an Alaïa dress from The Editions.

Moroccan choreographer and dancer Hajiba Fahmy spins ecstatically in a delicate white dress, its long skirt fanning out dramatically, and her legs visible beneath the delicate, lace-like swirl. All around her, LED-lined walls crackle to life with mesmerizing imagery, and stirring electronic music swells.

Animating its fashion legacy with an artistic performance and high-tech wizardry, Alaïa is staging its first digital event today, with Naomi Campbell as “godmother” of the proceedings.

It’s all to exalt the Paris-based fashion house’s latest product volley, called The Editions, a wardrobe spanning 30 of the late designer’s most emblematic designs from 1981 to 2017. They went on sale worldwide on Nov. 16.

“We’re already sold out of a number of pieces,” said Myriam Serrano, chief executive officer of Alaïa, noting that stock of Fahmy’s “crinoline” dress, originally from the spring 2007 collection, evaporated within a week. “The people who know us are very happy to see that some iconic pieces are back because they weren’t available for such a long time. And I think we have some new customers discovering the Alaïa universe. So that’s great news.”

While one of fashion’s most acclaimed practitioners, Azzedine Alaïa was also famously discreet and reticent to follow most industry conventions, staging runway shows only intermittently — usually outside of main fashion weeks — and shunning ad campaigns, splashy parties and celebrity placements.

But that’s changing. Joining Serrano on Zoom was Norman Lemay, who quietly joined Alaïa last June from Chloé as image director, a new post. Sharing his computer screen, he ran through the complexities of mounting tonight’s livestream, for which he employed programming experts at the La Gaîté Lyrique, a hub for digital arts and electronic music in Paris. In a behind-the-scenes clip, he shows them mapping details of the crinoline dress to project as patterns in the performance space. 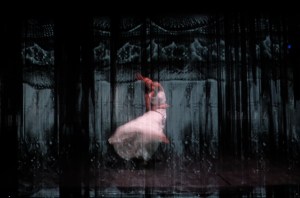 Hajima Fahym performing in an Alaïa dress from The Editions with a backdrop depicting elements of the intricate skirt.

Lemay noted that movement — and body language — is likely to be a recurring theme in brand communications, tying back to the founding couturier’s skill in transforming the silhouette of women, his swingy skater dresses a penultimate example.

Serrano lauded Fahmy, whose biggest claim to fame is touring with Beyonce and being among dancers in her landmark 2018 Coachella performance, as an embodiment of the house esthetic.

“She’s really a mix of strength and grace, very feminine but at the same time sporty and strong,” she said. “And the best way to see our clothes is on the body and on a body in movement….I think it was really important to show how alive The Editions are, bringing back this energy and bringing back this vitality.

“It’s amazing to see this timeless dress from 13 years ago in that context. It really shows the new energy of the house,” she added.

Campbell, so close to Alaïa that she called him “Papa,” is to introduce the dance performance on Instagram Live, and chat with Karlie Kloss, among models she has taken under her wing, about the transmission of heritage, a key idea behind The Editions line.

“She speaks about transmission, but she does it in real life as well,” Serrano said of Campbell, a mentor to young models and a champion of many up-and-coming designers and worthy causes. “Naomi really speaks to the young generations as well. She’s really active in charities, and she really represents good values linked to what Alaïa is about: transmission, inclusivity, and generosity.”

Besides Campbell and Kloss, Alaïa has conscripted a host of other VIPs — including Veronica Webb, Rossy de Palma and Doutzen Kroes — to amplify the performance and model conversation on their own social channels.

There will also be live viewing events tonight — at an art gallery in Shanghai, and on a rooftop in Dubai — and all the content being generated will live on across Alaïa social channel and its e-store, Lemay said.

Serrano noted The Editions line will have a long life on the racks, and never go on sale. The second selection of iconic pieces from the archive will be unveiled to the trade in May.

Fanfare around the first drop includes activations at Alaïa boutiques in Paris, London and Dubai, digital storytelling galore, and pop-ups at key global retailers and e-tailers, including in Asia where the brand is less known.

Alaïa first presented the concept to its wholesale partners in June, and some 90 percent took on board The Editions, which represents about 20 percent of the entire spring 2021 offer. The garments and accessories carry sewn-in labels indicating their vintage; boast QR codes on the hangtags that link to online storytelling, and come packaged in special garment bags.

Since the founder passed away in 2017, Maison Alaïa has dabbled with vintage re-editions, often prototypes from his vast archives that were never commercialized. The Editions includes a few of these, but also signature designs such as a leather bra, biker jacket, elongated white shirt, and gladiator sandals.

Selections from the archive were made by Serrano, Carla Sozzani of Corso Como, who is president of the Alaïa Foundation, and Caroline Fabre, Alaïa’s director of heritage, editions and couture.

The re-editions are made using the same patterns and fabrications, and priced roughly the same, or slightly higher, than the seasonal collections.