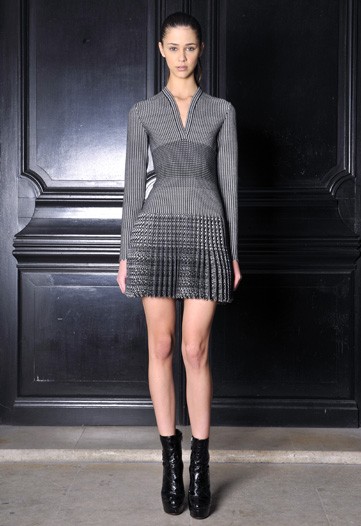 PARIS — Add Azzedine Alaïa’s voice to the argument that fashion’s breakneck pace of collections must be halted.

“It’s inhumane,” Alaïa said Tuesday at his headquarters in the Marais here, where he invited a handful of editors to a showroom presentation of his fall collection, almost a week after Paris Fashion Week drew to a close.

Indeed, asked about shamed couturier John Galliano — ousted from Dior amidst widening allegations of drunken racist and anti-Semitic outbursts — Alaïa suggested the crushing workload must surely have been a factor in the designer’s downfall.

“It’s sad. He’s a friend,” a rueful Alaïa said. “It’s too much: too many collections; too much pressure.”

Alaïa lamented that the pace of fashion is also too onerous for journalists, who are overwhelmed by an onslaught of seasons and collections, leaving them no time to absorb what they have seen, let alone see enough of their families.

Alaïa declined to hazard a guess who Dior might tap to succeed Galliano, who headed the brand’s creative rejuvenation and devoted 15 years to the house.

“There are some people who are irreplaceable,” he said.

Meanwhile, Alaïa continues to work at his own pace and on his own terms, choosing to show almost exclusively knitwear at Tuesday’s presentation: short fit-and-flare dresses, sinuous gowns and small, cardiganlike jackets. (The only exceptions were a few ultrafeminine trenchcoats in printed ponyskin.)

He noted he’s mulling showing his more intricate pieces — including styles in leather and fur — during couture week here.

Preferring a hands-on approach to the business, Alaïa was slated to travel to Italy later this week to check on his production facility: Maglificio Miles, which has been knitting up his technical marvels for more than two decades.

For fall, Alaïa enlivened his signature shapes with an array of textures and prints, from simple raised dots to bold zebra stripes or animal spots. Zigzag edges around necklines and shoulder straps gave his sleek, figure-hugging dresses extra teeth.

Alaïa declined to give sales figures, deferring questions about the vitality of business to his key wholesale partners, such as Barneys New York in America and Dover Street Market in London.

Daniella Vitale, Barneys New York chief merchant and executive vice president, said, ““The business has always been a stalwart of Barneys but it has seen tremendous growth, in all categories, with the newly articulated space. There is no one like M. Alaia and our client is enamored by his dedication, creativity and inspiration.”

Alaïa did cite an influx of Russian clients and disclosed plans to open a second Paris boutique, in addition to the one on Rue de Moussy attached to his sprawling complex of buildings, which includes a three-room hotel and home to a future five-story Alaïa foundation.

The designer also continues to use his airy atrium for exhibitions. Coming soon is a showcase for young photographers from ECAL, the famous university of art and design in Lausanne, Switzerland.