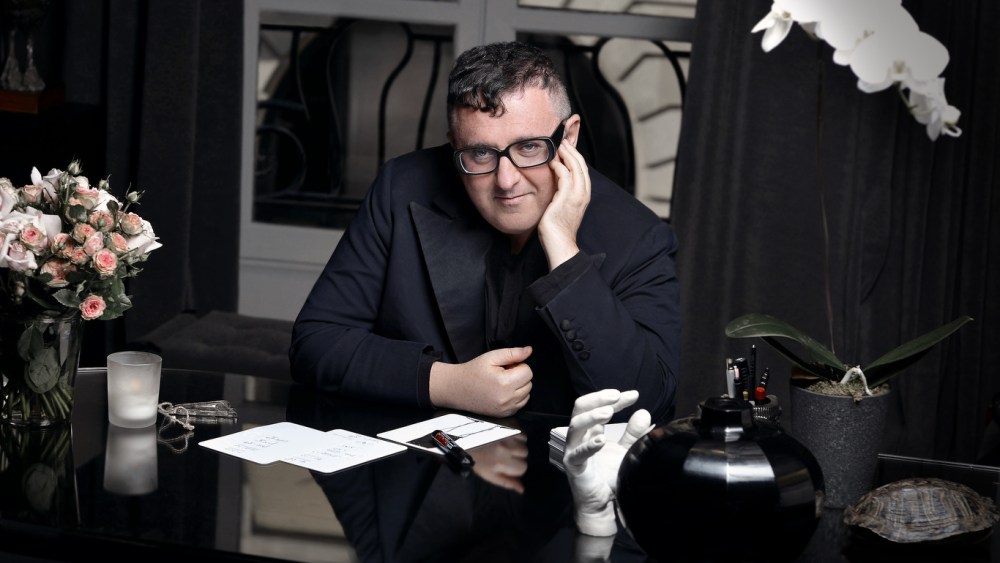 The fashion world reeled with shock and grief to learn that Alber Elbaz, the designer best known for his spectacular rejuvenation of Lanvin from 2001 to 2015, had died at a Paris hospital. He was 59.

His death on Saturday, due to COVID-19, was confirmed by Compagnie Financière Richemont, his joint venture partner in AZ Factory, his latest fashion venture.

He was among the leading fashion figures who have died of COVID-19, who include Kenzo Takada and Sergio Rossi.

An ebullient character prized for his couture-like craft, Elbaz took a five-year hiatus after being ousted from Lanvin and just launched AZ Factory, hinged on solutions-driven fashions, entertainment and tech.

While his name was not on the label, the start-up was steeped in Elbaz’s personality, humor, and his inimitable flair for soigné fashions.

“I have lost not only a colleague but a beloved friend,” Richemont founder and chairman Johann Rupert said in a statement, expressing his shock and sadness at Elbaz’s sudden passing.

“Alber had a richly deserved reputation as one of the industry’s brightest and most beloved figures. I was always taken by his intelligence, sensitivity, generosity and unbridled creativity,” Rupert said. “He was a man of exceptional warmth and talent, and his singular vision, sense of beauty and empathy leave an indelible impression.

“It was a great privilege watching Alber in his last endeavor as he worked to realize his dream of ‘smart fashion that cares.’ His inclusive vision of fashion made women feel beautiful and comfortable by blending traditional craftsmanship with technology — highly innovative projects which sought to redefine the industry,” he added.

“The world has lost a legend,” the AZ Factory team said in a statement. “The power of his vision, his extraordinary imagination, his adoration of women, and his kind heart have fueled his latest gift to our lives: AZ Factory. He lived for fashion, and we were all so lucky to have been a part of this adventure, Alber’s project to reset fashion to care. Alber, we will all carry your mission in our hearts, and your generosity in our lives.”

In a statement, the Fédération de la Haute Couture et de la Mode said Elbaz’s “great talent, his generosity, his human warmth and his sense of femininity made him a unique figure in the world of fashion and creation.…We will particularly miss his bubbling creativity, his joyful vision of fashion and his willingness to constantly redefine it.”

Ralph Toledano, president of the Fédération, said Elbaz “put love and humanity at the center of his work. He had an absolute and driving desire for modernity. He felt things better than anyone else and took the time and distance to reinvent his fashion work between know-how and innovation.”

Born in Morocco and raised and educated in Israel, the designer moved to New York in the mid-1980s. After a stint at a bridal firm, he landed at Geoffrey Beene, working as his senior assistant for seven years.

Elbaz came onto the international radar when he was recruited by Ralph Toledano to helm Guy Laroche in Paris in 1996, a stint that won raves, media attention and the job offer of a lifetime: to succeed couture legend Yves Saint Laurent at the helm of Rive Gauche ready-to-wear in 1998.

After three seasons, Elbaz was fired in the wake of Gucci Group’s takeover of YSL, with Tom Ford picking up the design reins. Elbaz subsequently did one season with Krizia in Milan before sitting on the sidelines of the business for one year.

He eventually landed at Lanvin in 2001, and Elbaz embraced the coziness of a small, privately held company — and a brand that was under the radar.

Not for long: His elegant, feminine designs and pulse-pounding runway shows, which had a carnival spirit, catapulted Lanvin to become a top Paris fashion house.

His rejuvenation of the brand was built on a woman-first ethos and the cocktail dress, which ranked as one of the most important items of the Aughts, thanks partly to him. “I said, ‘It’s all about zip-in and zip-out,’” he said in an interview in 2014.

“It was just about giving ease to women,” he said of his dresses with industrial zips and raw edges, two of the design signatures he established for Lanvin. Dressy sneakers with grosgrain laces, ballet flats and chunky costume jewelry were among his other hit designs.

During his tenure, he transformed a business largely dependent on men’s wear into a leading designer brand for women, part of the vanguard in Paris that launched an enduring trend of couture-influenced French elegance — and gave the French capital new buzz.

Fond of musings on fashion, Elbaz often returned to the word “desire,” something he felt instinctively when he first visited the archive of the founding couturier, whose dresses from the ’30s are marvels of delicate femininity.

“I said, ‘You know we are going to make collections for women, we are going to actually emphasize the desire, the desire in fashion, the desire in design,’” he said in a 2012 interview. “I was very much into design because I came from the house of Geoffrey Beene, which was all about design, and then we pushed it also to desire, to women, to reality, to be relevant. I think to be relevant is the story of my life.”

While Elbaz always talked a good talk, and was among the most quotable designers in the business, he also trusted his gut.

“I work mostly by intuition. Every time I think too much and try to rationalize every issue, it doesn’t work. I think that intuition is the essence of this métier,” he said in 2014.

He also never dabbled in men’s wear, appointing a deputy, Lucas Ossendrijver, when he was at Lanvin.

“Our job as designers is to listen, to understand. All my career I always worked with women and for women,” he said in 2019.

Indeed, Elbaz thought about women incessantly: their lifestyles, wardrobe needs, emotions. “I’m not here to make one look,” he explained in a 2007 interview. “You have to follow their needs. That’s the whole idea of design.”

Known for draping fabrics directly on the body and using them to their best advantage, Elbaz also frequently emphasized the human hand in fashion by leaving stray threads, a riposte to the flurry of Instagram posts and e-commerce sites that had given fashion a high-tech, impersonal sheen.

After being ousted from Lanvin in October 2015 and before partnering with Richemont, Elbaz busied himself with speaking engagements and small design projects at various price points, including a collaboration with Tod’s on shoes; a Converse sneaker; a limited-edition makeup line with Lancôme; a range of travel bags and accessories with LeSportsac, and a fragrance with French perfumer Frédéric Malle.

He returned to the fashion spotlight last January during couture week in Paris, though he was loathe to call it a comeback. Via a humorous mini movie, he unveiled three “projects,” the first of which — formfitting dresses dubbed My Body — went on sale immediately on the AZ Factory website, Farfetch.com and Net-a-porter.com, the Richemont-owned e-tailer.

Expressing sadness and condolences, Net-a-porter said in a statement: “A true visionary and tremendous talent, Alber was renowned for his wit, charm, sense of fun and monumental influence on the fashion industry. Most importantly, he had an incredible gift for making women feel their most beautiful and confident. His elegant and enriching designs garnered a loyal following and revitalized French fashion house Lanvin during his 14-year tenure. He recently turned fashion on its head with the exciting launch of his new project AZ Factory; a brand for women of all shapes and sizes designed to spread happiness and joy. He will always be a much loved member of the Net-a-porter and Richemont family, and we will miss him dearly.”

Key elements of the AZ Factory project were cutting-edge “smart” fabrics, a new business model hinged on projects rather than collections, and with storytelling, problem-solving and entertainment embedded in design, distribution and communications.

Yet Elbaz always sought to convey emotion in whatever he did, describing his My Body ranges as “dresses that hug you” and decorating his pajama sets with his sketches and declarations of “I Love You.”

The designer, a self-described hypochondriac, took great pains to protect himself and others from the coronavirus. All participants and visitors on his film set wore double face masks and were tested on-site. “I even thought of antibacterial dresses before there was COVID-19,” he said during a preview of his first AZ Factory projects.

To show his gratitude to health-care workers who have rose to the challenge during the pandemic, he sketched a cluster of nurses on a T-shirt and scrawled “Merci.” They were sold at contemporary fashion chain Gerard Darewith proceeds to La Fondation Hôpitaux de Paris — Hôpitaux de France.

“You know my dream was to be a doctor, almost since I was born because I’m a real hypochondriac, and sometimes I wanted to be a nurse,” he told WWD. “If I were to start all over again, I think I would become a doctor or a nurse.”

Elbaz is survived by his longtime companion Alex Koo, a merchandising executive. Richemont declined to comment on other survivors or memorial services.

A Look Back at Alber Elbaz’s Most Memorable Quotes