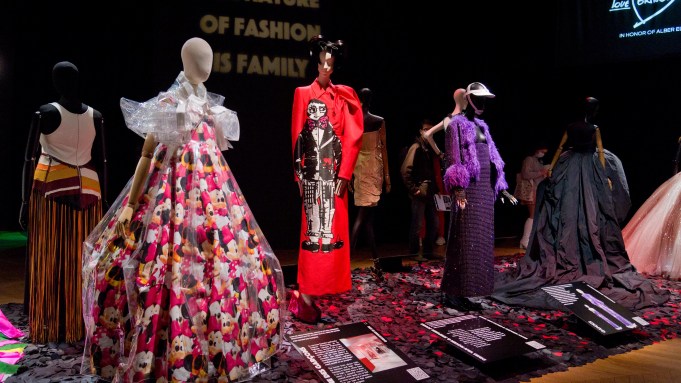 Museums in Paris frequently host fashion shows, but never has one devoted a months-long exhibition to a single runway collection.

That will change Saturday when the Palais Galliera welcomes the public to experience “Love Brings Love,” the electrifying tribute show where 46 designers and houses created looks to honor Alber Elbaz, who died in April 2021 of COVID-19.

The museum created a black-box setting reminiscent of the show in October, piping in the pounding runway soundtrack, and arranging all the dresses in mounds of the heart-shaped tissue that burst from confetti cannons during the finale.

“I hope it conveys joy,” said Alexandre Samson, curator of the exhibition, which opens to the public on March 5 and runs through July 10. “Never before has a fashion museum recreated a fashion show in its entirety….We are now in show business!”

Samson acknowledged it was a feat to mount the exhibition in such a short time — and to resist the usual curatorial impulses to add retrospective elements and overlays of academia.

That said, there is plenty of content to be digested, including biographies of all the participating designers, plus an entire room dedicated to Elbaz’s fashion career, from his start at Geoffrey Beene in New York through stints at Guy Laroche, Yves Saint Laurent Rive Gauche, his acclaimed 14-year tenure at Lanvin and then the creation of AZ Factory in 2019, his last project, a venture with Richemont that is ongoing.

Here visitors can discover Elbaz’s very first fashion sketches, realized with colorful markers on graph paper while he was a mere tween growing up in Israel. The budding fashion talent even designated certain of his designs for English and Iranian royals — his penchant for cocktail dresses and eveningwear already present.

The biography is mainly photographic, and includes several runway looks from Elbaz’s single season designing Krizia Top in Milan in 2000. Samson pointed out that the designer used Black models exclusively for that show, illustrating just one way he was frequently ahead of his time.

Fashion professionals lucky enough to have attended the “Love Brings Love” show in October 2021 at the Carreau du Temple venue will undoubtedly find new appreciation for the dresses, which are not encased in glass and can be inspected from the front and back. For example, who knew that Dries Van Noten had tucked a pair of black eyeglasses like the ones Elbaz wore into his hat, a crumple of grosgrain ribbons? Or that Dior’s Maria Grazia Chiuri embroidered “I love you” on one of the sashes trailing behind her grand ballgown?

Samson said the display should do much to wipe away the “bad reputation” some have of the fashion industry as a nest of difficult, back-stabbing designers. Here the public discovers that Elbaz was fashion’s great facilitator, connector and cheerleader, forever encouraging his peers with bouquets of flowers and encouraging words.

QR codes displayed at the foot of each dress unlock loads of online content that allows visitors to go behind the scenes and discover backstage video, footage, sketches, fitting photos and other insights into the creative process.

Or they can simply park themselves on any of the benches lining the walls and watch the original fashion show, broadcast continually on giant screens. Projected on the dark walls are some choice quotes by Elbaz, such as “Fashion should be simple; life is already complicated enough.”

Samson highlighted the use of mannequins that reflect the skin color of the model who wore each look, while some of the grand couture gowns — and the plus-size look Chloé contributed — are styled on Stockmans.

Samson noted that Magugu was the only designer to reference Elbaz’s Guy Laroche work, whereas most focused on the Lanvin period, remarking, “He really did his homework.” But he praised all participants “for not doing costumes. They met halfway between Alber’s legacy and their own aesthetic.”

Lanvin, now designed by Bruno Sialelli, contributed a dress based on one of Elbaz’s most iconic Lanvin designs — a billowing “parachute” gown from the spring 2008 collection, on the back of which Sialelli printed a large portrait of the late designer.

The original stands in an anteroom, a fan fluffing its volumes as Elbaz had it originally displayed in the Lanvin windows. Samson plastered the walls with advertising images done by photographer Steven Meisel, depicting a wide age range of women in his soigné designs.

In the last display room, a small screen broadcasts a 2011 Lanvin video campaign that predates TikTok and viral dance crazes. It features models Karen Elson and Raquel Zimmermann, plus Elbaz himself, grooving to a Pitbull track.

Designers and Celebrities Pay Tribute to Alber Elbaz in Paris