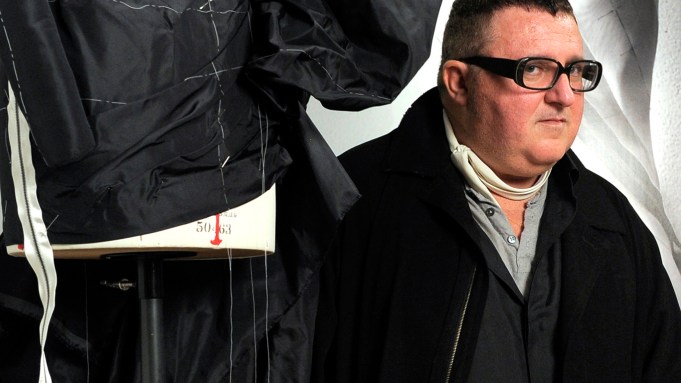 PARIS — Well before Instagram, the camera changed fashion, transforming hand-wrought, highly personal objects into glamorous, two-dimensional images. Yet the “Alber Elbaz/Lanvin: Manifesto” exhibition that opens here today at the Maison Européenne de la Photographie focuses on the human-led process behind the collection — up to and including loose threads and frayed nerves.

The exhibition is not about Photoshop or photo shock,” Elbaz said on Tuesday, conducting interviews in one red-walled room of the showcase that glowed with the eerie light of a darkroom. “It’s really about showing that we did not manipulate the images, that we photographed them and we left them as they are.

“Behind those images, there are people. Behind those dresses, there is a big group of people working and making those happen,” he continued. “So it’s not just a flat image, but there is a huge depth and the depth is human.”

Sprawling over a complete floor, the exhibition opens in a pitch-black room appointed with large light boxes glowing with But Sou Lai images of a Lanvin fashion show: Here, the blithe Australian model Julia Nobis in a pleated bustier dress; there, an overhead view of a sole male model, dwarfed by giant light booms that crisscross the Beaux-Arts venue where Lanvin usually shows.

Some of the photos are blurred or deliberately overexposed, the facial features obscured, putting the focus on Elbaz’s designs.

The red room flicks on the color, with more runway photos — most taken during rehearsals — of billowing dresses, sleek tailoring and snaking ruffles.

The second half of the exhibition goes deeper behind the scenes to what the designer calls the “laboratory of fashion:” Photos of work-in-progress dresses, documented by Lanvin employees, are plastered to the wall at eye level with electrical tape, creating the impression of negatives.

It culminates with about a dozen incomplete dresses on Stockmans, juxtaposed with photos and paper patterns, and a frenetic eight-minute video that shows fabrics being ripped, snipped, stitched and finessed — along with Elbaz stressing backstage about a color not being right. “When you do it for the screen, you want to scream,” he pronounces, cueing more fast-cut images of backstage tasks: eyeliner application, lint rolling and high-fives with models.

The designer said he thrives on an intense atmosphere in the studio and backstage.

Elbaz admits that designers must accept the supremacy of imagery, and that cameras not only document fashion, but influence it. Cameras “purified the lines of fashion,” while screens “flattened fashion, how we photograph just the front of the dress, but never the back. The fronts are always sexier, the back is more sensual. So that also explains why fashion turned from being more sensual to being more sexual,” he explained.

The exhibition spans about 400 images by professional photographers and Lanvin staffers including Mark Leibowitz, James Bort, Juliette Da Cunha and Alex Koo, who is Elbaz’s partner and the company’s merchandising director. It is scheduled to run until Oct. 31, with a special viewing planned for Oct. 6 during Paris Fashion Week.

Asked if he ever thought about picking up a camera, Elbaz issued an emphatic, “No.”

“I did take photographs in the past when I was on vacation. Only Polaroids, but after I took them, I usually gave them to the people in the photo. So I have only memories,” he smiled.