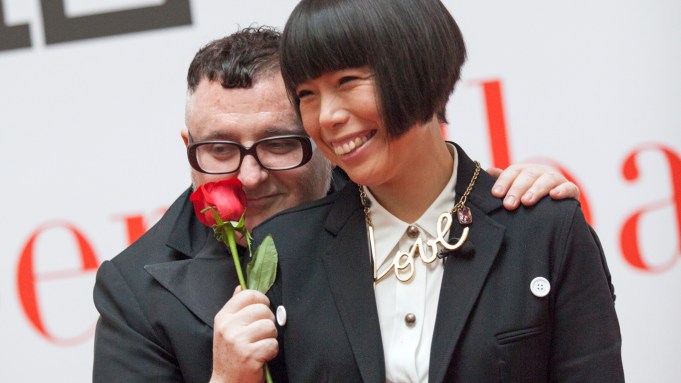 BEIJING — Be true to yourself. That was the message that Alber Elbaz drove home to students at Tsinghua University here on Thursday. The talk, soaked in humor and life lessons, was moderated by Vogue China editor in chief Angelica Cheung.

Throughout the two-hour discussion, the former Lanvin designer stressed the importance of fashion education and being authentic.

“Fashion is a very long marathon where we run but don’t lose calories. We work so hard and we have to prepare ourselves to learn how to do fashion and it’s not enough just because you’re famous,” Elbaz said in front of 300 students. The speech was also streamed live on online education platform Uni-Class.

At this point, Cheung asked: Do you want to repeat what you said to Victoria Beckham?

“Ahhhh, yes I will,” Elbaz laughed.

“She’s a friend and I love what she does…after my 10-year anniversary [at Lanvin], I came out after the show and I sang a song: ‘Que sera, sera, whatever will be, will be.’ That was really big news because I’m not really a singer. A month later, I saw Victoria and [she] told me: ‘Alber, how dare you, I hear you started a singing career.’ I told Victoria: ‘if you can do fashion, I can sing.’ So here we are, which is a big compliment to Victoria.”

Prior to his visit to Beijing, Elbaz was in Korea where he said he was visiting friends, spoke with students and wrapped up his visit with karaoke. At the beginning of the speech Thursday, the designer gave a gargantuan gold chain necklace with the word “Love” to Cheung, who plugged her new magazine Vogue Me, throughout the talk.

“I brought you a little gift from Paris — that is love,” Elbaz told Cheung as he placed the necklace on her.

The designer spoke about how the digitally charged Millennial generation is living in a world of distraction, obsessed with social media and not living enough in the present.

“I feel people are just posting — they’re not looking, they’re filming. They’re not listening, they’re taping. [There’s] less communication we have between us. The decision to come in person [is] to tell you that I really love China, I love being here. It’s not a post, it’s not a tweet, it’s to tell you in person that you are a wonderful, wonderful country,” he said to a fashionable, iPhone-savvy audience, who were giddily photographing his talk.

Elbaz has been visiting the Middle Kingdom for 15 years and talked about his love for Chinese culture and traditions, but how the country has also quickly adapted to the globalized world. He cited an example of a waiter offering him ketchup at a restaurant.

He went on to tell the students about preserving traditions, taking the time to travel, work odd jobs and continually learn and gain work experience instead of rushing to launch their own label after graduation, deeming the move as “provocation” and “in the end, nobody buys into this provocation.” The simple ingredients of fashion, consisting of “a seamstress, needle and thread,” is now being overshadowed by the clout of technology.

As an example, he shared his observations at an Apple Watch party he attended in Paris.

As a solution, Elbaz offered how smart design could help move the industry forward by “mixing technology and the humanity and beauty of fashion” to make beautiful clothes, he said.

In a country reputed for copycats, rote learning and restricted freedoms, Elbaz continually stressed the courage to push the boundaries and be true to yourself.

“Don’t be afraid to be you, don’t be afraid to be me. Be different from everyone else, don’t use a formula…what we have to do is make mistakes and mistakes are the mother of creation,” he said, sharing a story about a Golden Globes dress he made for actress Emma Stone that was about to be shelved the day of the show. It was the day several Charlie Hebdo cartoonists were killed in Paris and large demonstrations ensued.

“All the leaders of the world were walking the streets of Paris to show solidarity to the freedom to be what we are, not to hide and be someone else. So I wrote to Emma: you’re an actress, you’re a smart woman.…I said: ‘Do what you believe, don’t listen to anyone. Go with your heart. It’s more important to go and be authentic and go with your heart than to listen to all people…’ You know what? Just a second after I sent [the message], I got back a message from Emma and she said: ‘Alber, I’m wearing the dress that you sent me and I give all the love and support to people in France,’” he said.

He added: “When you do things by yourself, sometimes it’s more difficult, but the achievements are faster, are higher and better.”

Responding to this call for courage, an audience member probed Elbaz about how his relationship was with Taiwanese media magnate and Lanvin majority shareholder Shaw-Lan Wang, who ousted him from the Paris fashion house last year, ending his 14-year tenure. Elbaz remained mum and asked if he had another question while Cheung stepped in to steer the questions back in line to the focus on education.

Elbaz said he’ll be working with students at Tsinghua University on Friday and fly to Tokyo on Monday to “meet with friends and eat sushi.” As for his next steps, he said he’s simply taking his time “to think what is it that I would love to do and bring me joy again.”