The designer was putting the finishing touches on his Lanvin (Heart) H&M collection before the highly anticipated fashion show. 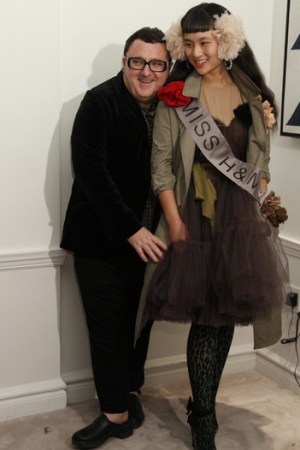 NEW YORK — Alber Elbaz on Wednesday evening was putting the finishing touches on the Lanvin (Heart) H&M collection he’ll show tonight at the Pierre Hotel. Elbaz chose 20 looks, which he customized for the runway with strategically placed bows and fabric flowers, piles of necklaces, netting and hats. He took a strapless ruffle dress and added more layers and turned men’s wear into sexy and elegant styles for women.

This story first appeared in the November 18, 2010 issue of WWD. Subscribe Today.

“We took a lot of things from our collection and translated them differently,” Elbaz said. “We’re seeing how you make it your own and elevate it. We customized a men’s coat. It has new buttons.”

The reworked coat had two black fabric flower buttons and black and rhinestone jewel buttons. Clearly not satisfied, Elbaz scrutinized the model as an assistant ran over with a handful of different buttons.

The models were ensconced in a room off the main suite at the Pierre with clothes hanging on racks and tossed on the floor, piles of accessories, pantyhose in odd color combinations and pieces of fabric. Asia Chow emerged wearing an olive green men’s trenchcoat over a black dress with nude bodice and mesh skirt. A sash across her chest read “Miss H&M,” beauty contestant-style. She had earmuffs made from tulle poufs and large red and beige flowers pinned to the coat, green and black patterned pantyhose and leopard-print shoes tied at the ankle with black ribbons and rhinestones on the heels.

“It’s nice to have some models and friends of different generations and body types,” Elbaz said.

Asked who else would be walking in tonight’s show, he said, “That’s a surprise.”

“Asia is 16,” said her mother, Eva, watching from the couch. “She’s so excited. How many girls get to work for Alber?”

Eva Chow invited Elbaz to Los Angeles, where she lives, saying he should come and look at his store. Elbaz confirmed that he’s opening a store in Los Angeles but declined to divulge the location. “We’re just renovating it right now,” he said.

Lanvin (Heart) H&M will launch on Saturday in 24 of the retailer’s U.S. stores. That’s twice as many stores an any previous designer partnership, an H&M spokeswoman said. On Saturday, the stores will open at 8 a.m., two hours earlier than at other designer introductions. H&M’s largest store, a 60,000-square-foot unit opening at the Forum Shops in Caesars Palace in Las Vegas in early December, will host a Lanvin event on Dec. 10.

Elbaz said he’s been working on the collection for nine months. “They [H&M] knew what buttons to push,” he said. “They gave me a challenge. They said, ‘Can you translate the dream of Lanvin and give it to a bigger audience?’ ”

He decided to design mostly dresses and coats for the collection because he was told that after the first day of an H&M introduction, “what’s left over is a skirt here, a shirt there. This is pretty and happy clothing.”

Yet it was a “tough project,” Elbaz admitted. “They said there would be four or five meetings. We had 40 to 50 meetings. I don’t think you’re getting an expensive H&M [piece]; you’re getting a bargain of Lanvin.”

The designer doesn’t think the house’s customers will object to the lower-priced collaboration. “People today are buying on eBay, and we’re seeing our things copied everywhere. [Our clients] got the original — hot from the oven.”

Elbaz admitted that the runway show is “stressful. Every [show] is like a wedding.”