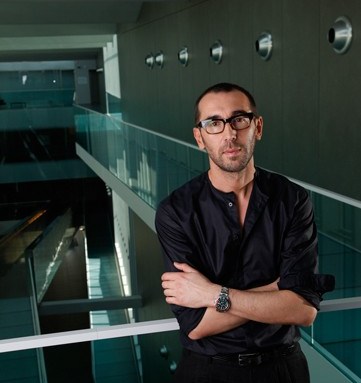 After two years of showing during New York Fashion Week, Z Zegna returns to the Milan runway this season, heralding Sartori and Ermenegildo Zegna chief executive officer Gildo Zegna’s ambitions for the brand, which may include a new Peter Marino store.

Calm and welcoming, Sartori sits surrounded by racks of summer jackets, trenchcoats and trousers from his upcoming collection at the firm’s headquarters on Via Savona, where members of his design team verify the size of a check or the width of a collar, questions he modifies with a “just so” but never without a “thank you.”

The 42-year-old’s gentle manner belies an unwavering confidence and a steely determination to succeed. Some in the industry describe Sartori, who, during his time at Zegna, assisted Tom Ford in choosing fabric exclusives when the latter was still at Gucci, as one of the most ambitious men’s wear designers at work today — and quite possibly the most modest.

For spring, Sartori presents a vision of neo-dandyism, which incorporates elements of graffiti from Berlin, London and Milan on to prints and accessories.

“The dandy we have in mind is not a character of the past. It’s not a vintage story, but it’s a man who knows about elegance and eccentricity working with his own style and attitude to build something different,” Sartori explained. “It’s about working in a smart way to build a different type of garment.”

Take, for example, a silk and cotton jacket with a built-in inner layer, which can be worn without a shirt. Sartori also applied his “wearable lining” to trenchcoats and blousons. Meanwhile, the “fresh touch” fabric in jackets for summer are made from extrafine twisted silk and cotton and feels cold to the touch.

Sartori is going long and lean for spring, with jackets averaging three centimeters longer worn with slim-fitting trousers. Shoulders are still squared, but not so padded.

Sartori was born and raised in Biella, a mountain town in the northeastern corner of Italy famed for its wool production, and home to Zegna. His knowledge of his craft came not only from his hometown but also from his mother, an accomplished seamstress, whom he used to watch fitting locals in his family kitchen and stitching dresses and skirts into the night.

“I’ve always been drawn to clothes since I was a child,” Sartori said. “I always loved watching my mother work fabrics into a construction. I knew it was something I wanted to do.”

After graduating from design school in Milan, Sartori landed a job at Zegna in 1989, where, except for a three-year stint with a clothing manufacturer in Hong Kong, he has spent his entire career. During his tenure at the Italian tailoring giant, Sartori has worked on every aspect of men’s design, from yarns to the collection.

“[Alessandro] was born and raised in the Biellese region, breathing fabric from the beginning and then gaining valuable sartorial experience,” Zegna said. “I think that his passion, together with his ambition and sense of creativity is very Zegna-fied,” a word he uses to describe passion, discipline, hard work and team play. “This formula, plus a strong sense of innovation, is what makes it happen.”

Zegna also credits Sartori, whom he describes as “a fresh young force,” with influencing the whole of the company’s portfolio, which includes the Ermenegildo Zegna and Zegna Sport brands.

“He has created a driving force for all the team,” Zegna said.

Z Zegna accounts for 15 percent of Ermenegildo Zegna’s sales, excluding the fabric division. Zegna explained the decision to bring Z Zegna back to Milan was motivated by a desire to synchronize the firm’s operations and make more of a splash.

“The goals for the brand are qualitative, not quantitative. We want to position the line as leading the contemporary fashion segment. I think we are going in the right direction; Milan will be a good [sounding] board to say it stronger and louder,” Zegna said.

Sartori said he believes showing Ermenegildo Zegna and Z Zegna during fashion week — this time at the open and close of the Milan season — will help both brands better delineate their space.

“It will be easier to understand. Each has their own cluster of customers and they are very specific in the marketplace,” Sartori said. The Z Zegna show will also be streamed live on the Internet, followed by a question-and-answer session with the designer on a blog the next day.

“We decided to have a much more democratic approach,” Sartori said. “It’s not only about the 500 people watching the show. I wanted to be close to the customer. We all need a step back from the hysterics, be close to the people and be more human.”

This definition and customer proximity may also extend to the retail network. Z Zegna is testing its own concept store, modeled after Peter Marino-designed Ermenegildo Zegna flagships in New York, Milan, Tokyo and Hong Kong. The first stand-alone Z Zegna unit opened in Shanghai last year, while a second will bow in Singapore this summer.

“We are testing in fast-growing areas such as Asia,” Zegna said, citing double-digit growth in the Far East with the exception of Japan. He added sales were growing 25 percent in South Korea, Singapore and China. “It’s also a way to introduce new customers to the group,” said Zegna. Around 50 percent of Z Zegna sales are to new customers.

“Thank goodness we have that engine,” he said.