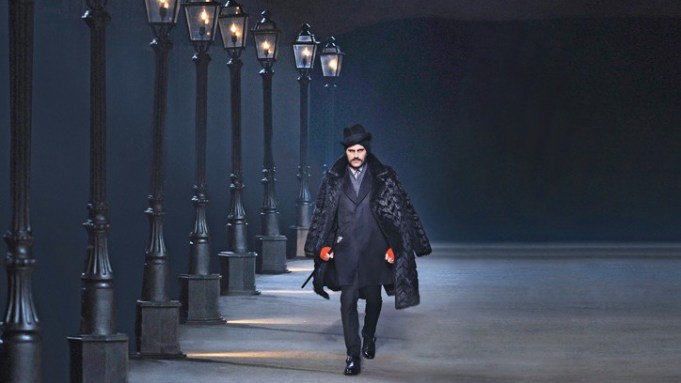 Fashion suffered a great loss when Lee Alexander McQueen took his own life on February 11, as the New York runway shows were about to get under way. As memoriams poured forth, they rarely failed to note that McQueen’s career began with a Savile Row apprenticeship—often finding irony in his evolution from traditional tailor to fashion iconoclast and consummate showman. But to followers of McQueen’s men’s wear, this was no irony. His masterful tailoring was not only crucial to his men’s business, it made a foil for his extravagant creativity, which in just a few years brought many new dimensions to men’s fashion.

When he first showed men’s on the runway in January 2004, it was a natural return to his professional roots. He launched the collection, inspired by Orthodox Jews, with a film about a couple’s weekend. And although he graduated to a men’s runway the following season, he continually thwarted convention in presenting men’s wear.

He executed themes to the hilt, sometimes borrowing narratives from such faraway lands as the Himalayas and Transylvania and regional characters like Queensberry boxers and North Sea fishermen. He frequently wove in elements of the supernatural or the macabre, and explored broad themes of male archetypes, male aggression and man’s relationship to nature. His experimental silhouettes and embellishments pushed limits, but never at the expense of masculinity. He built elaborate sets in surprising and sometimes uncomfortable locations. His men’s shows were simply the most theatrical in Milan.

Memories endure. The sweltering Lord of the Flies–inspired show. Vampires in Japanese robes. The superheroes in the Milan subway station. Victorian boxers and butchers beneath London street lamps.

But the single image most closely associated with McQueen was skulls, a motif eventually appropriated at every level of the fashion industry. The memento mori truly befitted McQueen because he was the kind of artist who routinely delved into the darkness, the morbid, the grotesque, the primal, the other.

For spring 2010, in lieu of a modeled presentation, he issued a rambling statement about needing a respite from the relentless creative pressures of the fashion system, and opted to screen a fi m about the anguish of making art.

“Feeling like you’re on a road to nowhere, trying to stay on the right path and trying not to go down the wrong corridors of life, and not to try to mend things that aren’t broken—repeatedly hitting yourself over and over: must do better!…got to come up with a new vision!…a new hologram blah blah blah…,” he wrote.

But if he was wrestling demons, his prodigious talent eclipsed them, as even that collection proved highly influential in its painterly motifs and riotous use of prints. He came back to the runway this season with a collection called “The Bone Collector” because he had considered the detritus of humanity that melting arctic ice could yield. Models wore leather muzzles and modern suits featuring engineered prints of bones, fur, chains and ice. Wind howled though the sound system and the audience shivered in the frigid temperature.

All showmanship aside, McQueen had a significant men’s business driven largely by outerwear and, of course, suits. His tailoring was invariably razor sharp with strong, sometimes exaggerated shoulders, even in seasons dominated by soft or unconstructed tailoring. The current resurgence of the double-breasted power suit could be traced to his commitment to that Savile Row ideal.

McQueen’s rib cage shirts and skull scarves were recurring hits, and he was one of the few directional men’s designers who enjoyed strong brand awareness and continuous growth in the U.S. His reach also extended through the McQ diffusion line and his collaborations with Samsonite and Puma.

PPR’s Gucci Group has determined that the Alexander McQueen brand will continue. They say it’s what Lee would have wanted. Either way, fashion is richer for his legacy.