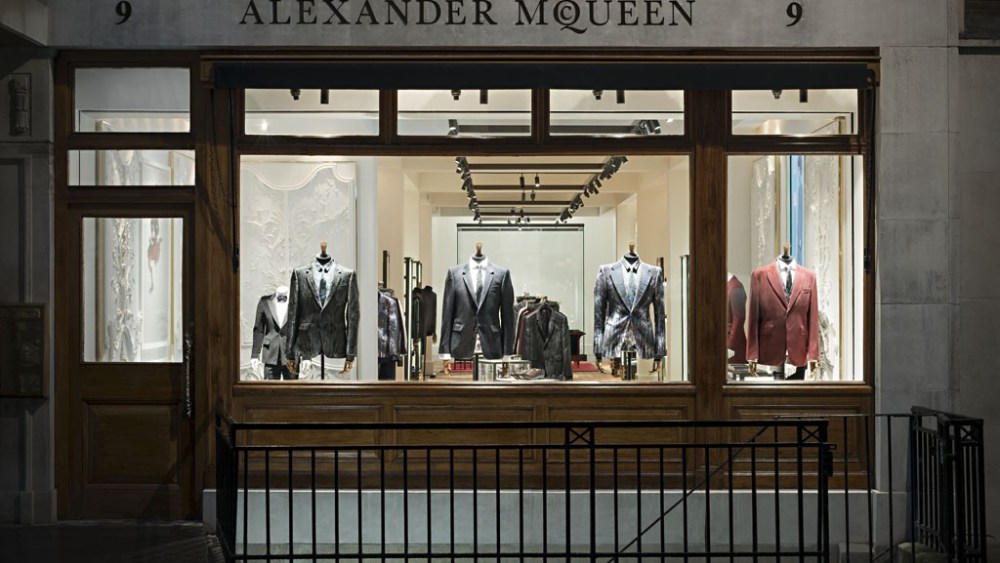 LONDON — Alexander McQueen has planted its flag on Savile Row with the opening of its first stand-alone men’s wear store at number 9, down the street from Gieves & Hawkes.

The 2,200-square-foot store was designed by David Collins in collaboration with McQueen’s creative director Sarah Burton. The two have been working together on a new retail concept for both men’s and women’s wear and for the McQ collection.

“We are offering a high-end ready-to-wear collection as well as developing our in-house bespoke service which pertains to the rules of Savile Row. This ultimately will ensure that we will carry on the tradition of Savile Row tailors,” said Jonathan Akeroyd, the company’s chief executive officer.

The Collins trademarks — including marble, glass and brass — are all there, and the McQueen DNA is unmistakable. The design was inspired by nature, art and the British military, and there are custom details throughout.

Greeting shoppers is a David Bailey portrait of a tartan-kilted McQueen leaping with jubilation. It is the same one that appeared on the order of service at the memorial for the late designer at St. Paul’s Cathedral following his suicide in 2010.

On plaster panels, which are hung like artwork as opposed to being set into walls, there are birds’ wings, shells and foxgloves — the British wildflower. Cabinet legs look like horns or claws, and there are brass worms carved into brass door handles. A long brass vertebraelike rail stretches through the center of the shop, suspended over a red carpet, to give the clothes the impression of being on military parade. At the back, there is a glass-encased exhibition space that will feature regularly changing artworks curated by the London gallerist Sadie Coles. First up is a Sarah Lucas depiction of the dancer Michael Clark.

The store opened Monday, and there is a party planned for tonight to mark McQueen’s Savile Row debut.

McQueen began his career as an apprentice on The Row, in the cutting rooms of Anderson & Sheppard and Gieves & Hawkes. This store is the brand’s first dedicated men’s wear unit in Europe, although there is already one on Shanghai. It realizes McQueen’s dream of having a store in the traditional epicenter of British tailoring.

“Lee McQueen was famously an apprentice of Savile Row so [the neighbors] have been very welcoming to our presence. We have collaborated with Huntsman, so there has been an ongoing relationship with the establishment on Savile Row,” Akeroyd said.

McQueen has been working with the Savile Row tailor on the bespoke Huntsman at Alexander McQueen Savile Row capsule collection. The collection teams the McQueen silhouette and block with Huntsman’s expertise, and is available in a choice of fabric weights and designs.