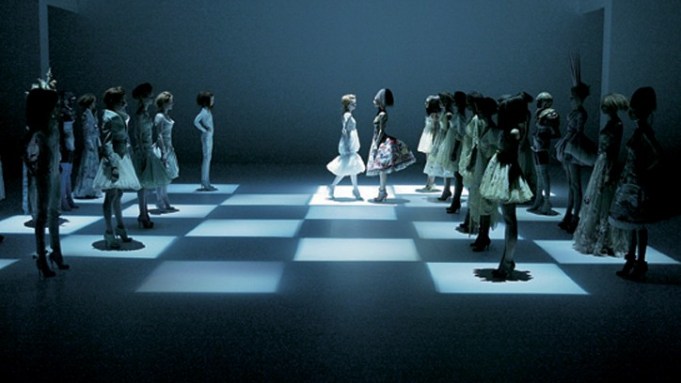 LONDON — Ever the entertainer, Alexander McQueen is preparing to wow a worldwide audience — in their own homes.

The designer is hoping his spring fashion show — which will be streamed live from the Palais Omnisports de Paris-Bercy on Oct. 6 — will break new ground in the way the public sees and understands fashion.

“It’ll be like live theater — at home,” said McQueen in an exclusive interview with WWD. “The audience at home is actually going to see more than the guests at the show. We’re filming from a load of different angles, and two big cameras will actually be a part of the performance.”

McQueen is collaborating with Nick Knight’s SHOWStudio.com, which broadcasts original fashion films, shoots, and special projects online, on the show, which will be streamed on alexandermcqueenlive.showstudio.com.

Robot cameras will be at work on and off the catwalk — and in the audience — while an LED screen at the back of the runway will beam out the roving cameras’ images. The camera lens as eye is a central metaphor of the show, Knight told WWD.

In addition to capturing the show on camera, McQueen and Knight will today start shooting a separate film that will be cut into the live coverage. The music will consist of two adagios, and has been composed by John Gosling and Raymond Watts especially for the show.

“Every year, buyers and the press come to see the spectacle of my show,” said McQueen. “But I want to generate something else, something for a wider audience — for people in Australia, Asia, and Middle America who don’t have a seat at the show. Really, what I’m aiming for is world domination!”

McQueen added he was getting sick of runway snow snippets landing on YouTube. “I want to be in control of the illusion, the narrative, the outlet. I want to bring the show back to me,” he said.

His isn’t the first company to stream its show live: Burberry, Twenty8Twelve, Michael Kors and Isaac Mizrahi are among the brands that did live productions for spring. McQueen and Knight, however, are billing this project as something different — a new take on fashion-as-entertainment.

“When you follow a sports event on television, often what you’re getting is a whole entertainment package — expert commentators, replays, extra footage — and an explanation of what is going on,” Knight told WWD. “The fashion industry is used to putting on shows for a small, invited audience. The shows pander to professionals, but not to the public. What we want to do is put McQueen’s show out there as an entertainment package for a wider audience, too.”

Knight added fashion designers overall have begun to look at their runway shows in a different light. “There is a sea change going on: Designers are seeing their shows as public — as well as professional — outings. They know the public is watching and pre-ordering the clothing on sites like Net-a-Porter.com, Yoox.com and Asos.com,” he said.

The famously private McQueen clearly loves engaging with his public over the Internet — and has been embracing new media with a vengeance. The designer has been Twittering around the clock on twitter.com/mcqueenworld since the start of September. Via Twitter, he broke the news that his spring collection would be streamed live, and since then he’s been twittering clues about show, including “The land of the iguana!!!” and “The Creationist” and “Origin of Species Part 2.”

“I’m doing it when I come home from a club, at 4 a.m. I’m doing it if I see something on telly,” he said. “I love the fact that my messages are coming right from the horse’s mouth — and I feel like I’m speaking to a company of friends. I do it so much that someone needs to get me a gag,” McQueen said.

McQueen said the idea of live streaming has been brewing since his fall 2006 Widows of Culloden show, when he beamed a life-sized hologram of Kate Moss into a glass pyramid on the catwalk. Next month’s show, he said, is only the beginning.

Over the next few seasons, McQueen hopes to create special capsule collections so the public can buy clothing right off his runway. He’s also dreaming of setting up glass pyramids, “anywhere in the world,” he said, and beam holograms of his fashion shows into them. He said he’d love to do a hologram show with the ballet dancer Sylvie Guillem, live from London.

“This is the birth of a new dawn,” McQueen said. “There is no way back for me now. I am going to take you on journeys you’ve never dreamed were possible.”