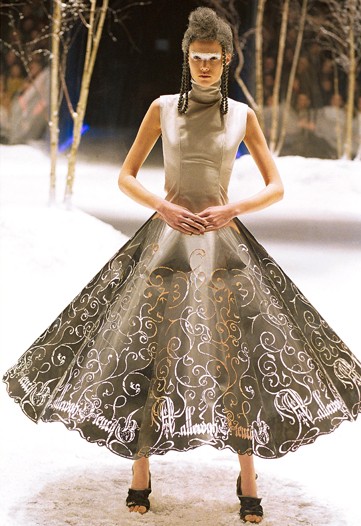 NEW YORK — Alexander McQueen is getting a tribute from the Costume Institute at the Metropolitan Museum of Art.

Next spring, the museum will stage “Alexander McQueen: Savage Beauty,” a comprehensive show celebrating the designer’s work over nearly two decades, beginning with his graduate collection at Central Saint Martins College of Art and Design in London and ending with his final collection, which was unveiled weeks after the designer took his own life in February.

The exhibit, which will run on the museum’s second floor Cantor Galleries from May 4 to July 31, is expected to highlight how the designer challenged traditional notions of fashion, from construction to his creative narrative that often served as a commentary on culture, politics and identity.

“After McQueen’s death, we wanted to stage an exhibition to celebrate his legacy in fashion history and his contributions to fashion,” said Andrew Bolton, who is spearheading this exhibit, with the support of curator in charge Harold Koda. “McQueen had such a singular voice and he was a remarkable technician.

“He really was one of the most provocative voices of the past 30 years in fashion,” Bolton added. “His catwalk presentations were outstanding and straddle art and fashion. We want to get across two elements — the spectacle of the runway presentations and the beauty of his craftsmanship.”

The show will feature about 100 pieces. Bolton combed McQueen’s London archive as well as the Paris archives of Givenchy, which he designed in the late Nineties. The Costume Institute is also borrowing pieces from personal collections, including the late Isabella Blow’s wardrobe, which was snapped up in its entirety by Daphne Guinness earlier this year, including McQueen’s military coat from his Dante collection.

Bolton stressed that he doesn’t want the exhibit to seem like a retrospective, and his approach will be thematic rather than chronological, with themes reflecting McQueen’s fascination with the 19th-century Romantic movement. They include “The Savage Mind,” “Romantic Gothic,” “Romantic Nationalism,” “Romantic Exoticism” and “Romantic Primitivism.” It’s not just McQueen’s elaborate dresses that will get their due. A “Cabinet of Curiosities” will feature many outlandish accoutrements that McQueen created with longtime collaborators Philip Treacy and Shaun Leane.

Sam Gainsbury and Joseph Bennett, who helped produce McQueen’s theatrical runway shows, will serve as creative consultants to the exhibit.

The Alexander McQueen company, which is a division of Gucci Group NV and owned by PPR, is underwriting the exhibit with additional support from American Express and Condé Nast.

“We felt it would be a great opportunity to show Lee’s work and his incredible contribution to the world of fashion and art,” Jonathan Akeroyd, president and chief executive officer of Alexander McQueen, said.

Akeroyd added that there was no hesitation about underwriting the exhibit, too. “It felt like the right thing to do,” he said. “Lee loved the museum. It will give us a great opportunity to show Lee’s work and the Alexander McQueen brand to a much broader community. It’s the greatest tribute and important for his legacy, but it’s also an exciting new chapter in the history of the brand.”

The exhibit will launch with the annual Costume Institute Benefit gala on May 2. François-Henri Pinault and Salma Hayek will serve as the evening’s honorary chairs, and Colin Firth, Stella McCartney and Vogue editor in chief Anna Wintour will be its co-chairs.