The designer unveiled a retrospective of the house’s history before presenting its spring collection, with a twist. 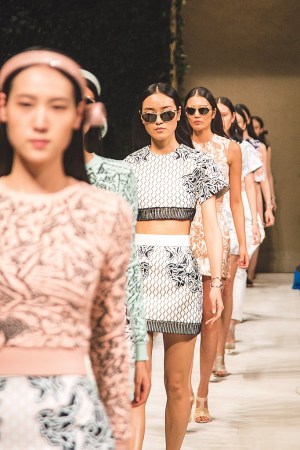 BEIJING — Alexander Wang brought Balenciaga’s past and present together in the Chinese capital on Thursday, unveiling a retrospective of the house’s design history before presenting its spring collection, with a twist.

The Beijing show included a capsule collection with 13 styles designed for the China event. The China Edition pieces included short mesh tops in lacquered forms paired with pants and shorts, green and salmon-colored mini-suits and a selection of six cocktail designs in black and white.

Wang also presented new robes, including a white satin piece with a flowing cape-inspired back. The China Edition pieces will go on sale in Balenciaga’s Beijing shops within the next few days.

In an interview before the show, Wang discussed the growing sophistication of Chinese fashion consumers and how Balenciaga plans to keep up and potentially become a favorite. He also said he believes the brand is well positioned to capitalize on the increasing demand for refined style in the country’s fast-growing luxury market.

“The consumers here have become much more evolved,” he continued. “The taste and the style have grown beyond the bigger brands that have a major presence.”

Balenciaga could be particularly appealing to the ever-more discriminating tastes of China’s fashion elite, those who are looking beyond the biggest brands and labels. “The thing about Balenciaga, it’s a very well-known name, but it was absent for a long time,” said Wang. “We’re trying to rebuild a lot of the presence and we see a lot of potential in China.”

The China event tied Wang’s emergence directly to the legacy of founder Cristóbal Balenciaga, starting with an exhibition of more than 40 pieces he created from 1939 through the late Sixties. They included iconic Balenciaga designs like the striking sculpted Gazar bolero dress from 1967, and the dramatic caped wedding dress of the same era and the 1958 baby-doll dress.

Wang chose the pieces for the exhibition, combing through Balenciaga’s archive to find a selection of clothing and jewelry that would show off the brand’s history to several hundred of China’s tastemakers. For his own show, the runway was set up in a nondenominational church on the campus of a Beijing art college — another important tie-in with a nod to the religion of the house’s founder.

China is important to Balenciaga’s business plans, as with the majority of other global fashion houses. President and chief executive officer Isabelle Guichot noted that the company already has 12 stores in Mainland China and is considering expansion plans, but did not divulge specifics. Guichot said she has found it most important with China to get to know each locality intimately, as the customers differ greatly by region and city. What works well in one part of China might be a flop in another part of the country.

“It’s a very moving environment, China, so you need to adapt,” she said.

“The competition is getting crazy, so it’s really about targeting the customer very, very intimately,” she continued. “The consumer in Harbin is totally different from the one in Hangzhou or Guangzhou or Shanghai. It’s a reality we have to adapt to.”

The Beijing event was designed to showcase the house’s storied past, as well as its new outlook, to China’s consumers.

“It’s important for the client to understand what makes Balenciaga different, to learn the history of the brand,” said Guichot.

The event was packed with Chinese models; actors like Yao Chen, Ni Ni and Wang Luodan, and other fashion-circle celebrities. The crowd moved from the retrospective exhibit to Wang’s show, closing out the evening with Champagne and a DJ spinning dance tunes.